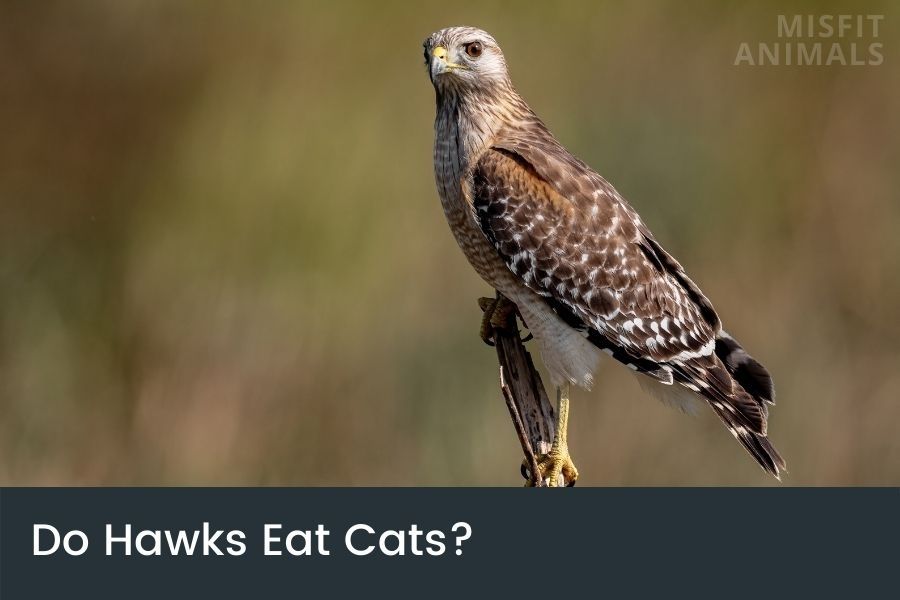 Hawks generally don’t eat cats, but it can occur. As hawks are smaller than cats, they can’t pick them up, but they may still attack if provoked or threatened.

Do you have a cat as a pet? Do you worry about whether or not your cat is safe outside? You may be surprised to know that hawks are natural predators of cats.

In this blog post, we’ll take a look at some of the research on this topic and explore the question of whether or not a hawk can pick up a cat. Stay tuned to learn more!

While hawks typically don’t eat cats, and won’t go out of their way to do so, it does happen occasionally. Adult cats usually are too large for hawks to attack and kill. However, hawks will eat kittens, weak cats, or dead cats.

The answer to this question is twofold. While most hawks aren’t capable of taking down a healthy adult cat, they will still eat cats if given the chance. This will most likely be in the form of weak or dead cats or kittens.

Most hawks also can’t lift up an adult cat, which makes their hunting efforts much more difficult.

Cats do occasionally fall prey to other animals that do eat cats, such as coyotes.

Hawks are known to hunt any kind of small animals that they come across[1]. They eat almost anything if given the chance.

A few of the animals that they hunt include the following:

Yes, hawks do attack cats, but only under certain circumstances: if there’s no other food around, or if the cat is threatening the hawk and/or its nest.

As stated, cats are larger than hawks. While hawks weigh between 1-3 pounds, most cats weigh up to 10 pounds. This gives a cat a significant advantage in a fight.

Hence, hawks will only attack if necessary:

Hawks do have a number of advantages over cats, such as their high dive speed, which they use to attack.

Related: How do hawks attack and kill their prey?

How Do Hawks Attack Cats?

Hawks are known for their ability to dive at incredible speeds towards their prey[2]. Their speed and light bodyweight serve them well, especially when hunting smaller animals like rabbits, squirrels, mice, and the occasional cat.

Before attacking, hawks hide in trees or soar high in the sky. This enables them to stay hidden up until the moment of striking.

Cats tend to be very good at sensing danger but even they are not quick enough to escape a hawk descending upon them at up to 120 mph.

The hawk’s talons are its most vital weapon in the battle against a cat. They have very sharp claws and muscular feet. Hawks use both when fighting. They scratch and claw their prey, and will wrap their feet around their neck (if possible).

Are Hawks a Danger to Cats?

No, most hawks are typically not a danger to cats. However, it largely depends on the size of the hawk and the cat. Smaller cats are at risk, while large cats aren’t.

Hawks are commonly known to prey on small animals such as mice and rabbits. Hence, a cat is not part of the hawk’s natural prey.

The prey that a hawk will target depends on the size; both of the hawk, and of the prey.

Smaller hawks typically prey on small birds, mammals, rodents, and reptiles such as lizards and salamanders.

Bigger hawks, on the other hand, may be tempted to attack a cat, as they frequently feed on medium-sized and large-sized prey, such as rabbits, hares, and large birds.

Can a Hawk Pick Up a Cat?

No, most hawks can’t pick up a cat. Cats are too heavy, with thick fur and muscles on their body to be able to pick them up.

Hawks can generally pick up prey corresponding to their body weight. Hence, a 3 pounds heavy hawk can pick up a cat that weighs 3 pounds.

There are a number of hawks, and other birds of prey, in North America that can attack and pick up pets, if the pets are small enough.

No, the Hawks can’t pick up a 10 pounds cat. No hawks are big enough to carry 10 pounds, hence if your cat is this big, it shouldn’t be at risk from hawks.

There is a misconception that all birds of prey will carry off larger animals. This is not the case. Hawks and other raptors are only capable of carrying around their own body weight.

Some hawks are large enough to pick up 5 pounds, though it’s the minority of species. Large red-tailed hawks, which are common in North America, can grow large enough to lift a 5-pound cat.

However, the majority of hawks are too small to carry more than 1-3 pounds, as this is their median body weight[3].

Related: How Much Weight Can a Hawk Carry?

How to Protect Your Cat From Hawks

As many cat owners know, cats are very independent creatures. They like to explore their surroundings and often get themselves into dangerous situations.

Hawks can be one of those dangers.

Here are some tips to keep your cat safe from birds of prey:

As with most things, protecting your cat from hawks begins with supervision. By supervising your cat, you are both ensuring that they are safe and also making yourself aware of the dangers.

Cats can be affected by a range of different types of predators and hawks are just one of them.

Follow your cat outside to scout for immediate dangers in your yard and neighborhood. If you see any large hawks, stick around.

2. Don’t Feed It Outside

Hawks are attracted to food. Hence, if you feed your cat outdoors, a hawk may be tempted to challenge your cat for the food, which can lead to an attack on your cat.

3. Don’t Let Your Cat Outside at Dawn and Dusk

In addition to avoiding feeding your cat outdoors, keep your cat indoors during dusk and dawn. This is when hawks are most active.

If there are large owls in the area, you may want to keep your cat inside for the entirety of the night.

Hawk deterrents can be effective at keeping hawks away from your yard. They take many forms, and you may find that a combination of different strategies works best for you.

Some of the most popular hawk deterrents include:

5. Remove Food Sources From Your Yard

One of the best ways to protect your cat is to avoid attracting any hawks in the first place. The best way to do so is to remove food sources from your yard.

If there isn’t any food, then they won’t come looking.

If nothing works, you can protect your cat from hawks by building an enclosed space.

When building an enclosed space for cats, you need to make sure that there’s enough space. Cats need to be able to move around, hence a small space won’t do.

This also works if you have chickens, ducks, birds, or dogs.

While hawks typically don’t attack cats, there are a few species of hawks that are large enough to attack pets. Most hawks are too small to pick up an adult cat, but they may target kittens or old and weak cats.

Hawks are opportunistic feeders and will prey on pets if they get the opportunity.