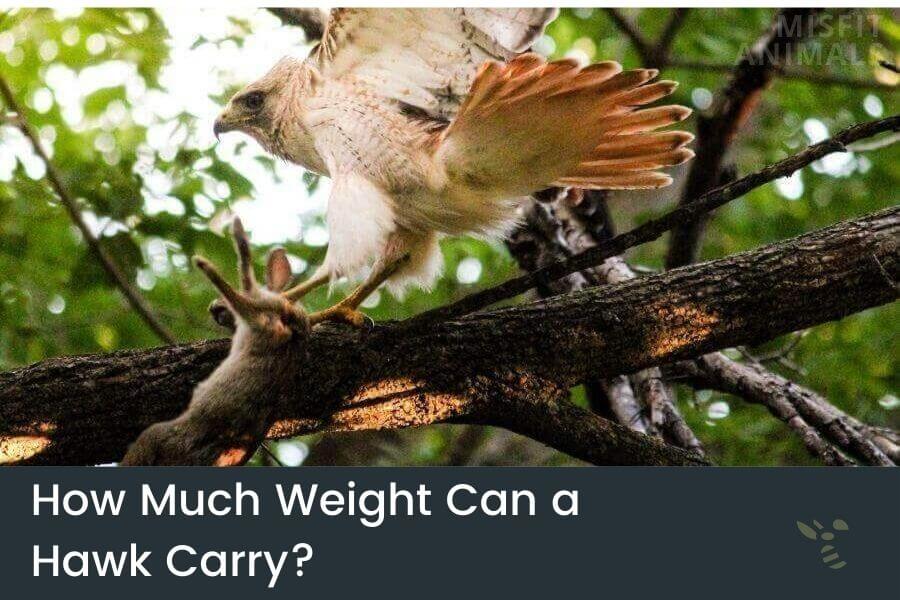 Hawks can carry weight equal to their own body weight. This is typically between 1 to 3 pounds, but some large hawks can carry as much as 5 pounds.

While hawks are known for their speed and hunting capabilities, they’re not among the strongest animals in the world.

Pet-owners living in areas with hawks are often concerned about whether they can snatch up their beloved pet.

But how can a hawk really carry? And should you be concerned about a hawk carrying away your pet?

In this article, we’ll discuss how much weight a hawk can carry and which pets and animals they typically attack.

If you’re concerned about your pet, we’ll provide some safety tips at the end of the article.

How Much Weight Can a Hawk Carry?

Hawks can’t carry the weight that’s heavier than their body weight. This means that they generally can carry between 1-3 pounds. Some big hawks can carry up to 5 pounds though.

Carrying weight by hawks is directly correlated to their body weight[1]. The bigger the hawk, the more weight it can carry.

Some hawks weigh more than 3 pounds, while others weigh less than a pound. Hence, it depends on the species and the individual hawk.

What Pets Can a Hawk Carry?

Hawks are predators. They hunt for food. When they’ve killed their prey, they will carry it away, so they can stay safe while feasting on their kill.

They typically prey on birds, rodents, small mammals, insects, and other small animals, but they’re not above preying on pets.

Here’s a list of common pets, some of which hawks can pick up.

Can a Hawk Pick Up a Dog?

No, hawks generally can’t pick up dogs weighing more than 5 pounds. As most dogs do weigh more than 5 pounds, which is the maximum carrying weight for hawks, they’re safe. However, it is still possible for very small dogs.

Dogs are on the larger end of the pet scale. Most dogs weigh more than 10 pounds, which hawks definitely can’t pick up.

On the other hand, we have puppies. Puppies are very light, and can definitely fall prey to hawks. Hence, if you have a puppy, don’t let it roam around unsupervised in your garden if there are hawks in the area.

There are cases when very large hawks have picked up a small dog.

Related: Can a Hawk Pick Up a Dog?

Can a Hawk Pick Up a Cat?

No, hawks can’t carry most cats. Most cats weigh between 7 and 10 pounds[2], which is too heavy for a hawk. Small cats and kittens are at risk.

Most hawks can carry between 1 to 3 pounds. Hence, the average weight of a cat is between 7 to 10 pounds, cats are too heavy.

Kittens, on the other hand, are not too heavy. Most kittens don’t weigh very much and are at risk of getting picked up and carried away by a hawk.

Can a Hawk Pick Up a Rabbit?

Yes, it is possible for a hawk to pick up a rabbit. Most wild rabbits weigh between 2.5 to 5 pounds[3], meaning they’re within the range of hawks carrying capabilities.

Rabbits are in a grey zone when it comes to whether hawks can pick them up. Some hawks can, and other hawks can’t. It depends on the hawk and the weight of the rabbits.

Some species of rabbits can get very large, weighing much more than a hawk can carry.

Can a Hawk Pick Up a Chicken?

Yes and no. Large hawks can pick up small chickens, but the average hawks can’t carry an average chicken. Domestic chickens typically weigh between 5 to 10 pounds.

It is possible for hawks to pick up a chicken[4]. However, the chicken has to be small, and the hawk has to be big.

As with all other animals, newborns are much lighter. A duckling doesn’t weigh very much and can be picked up by all hawks.

Can a Hawk Pick Up a Duck?

Generally, no, hawks can’t pick up adult ducks. Domestic Pekin ducks weigh between 8 to 11 pounds. However, it depends on the species of duck, as some ducks only weigh one or two pounds.

The same principles that apply to chickens also apply to ducks. A large hawk may be able to pick up a small duck. And as for ducklings, they can definitely fall prey to a hawk.

Can a Hawk Pick Up a Human?

No, a hawk can’t pick up a human. Whether it be a baby, child, or adult, hawks can’t carry any of them. Even if a hawk was strong enough,

There are old stories, dating back hundreds of years, of hawks preying on humans, specifically babies and small children.

And that’s all they are. Stories. Hawks aren’t nearly strong enough to prey on humans.

Can a Hawk Pick Up a Baby?

How Big of a Dog Can a Hawk Pick Up?

The largest hawks can pick up dogs that weigh less than 5 pounds, while most hawks can only carry 1-3 pounds, depending on their body weight.

No, a 20 lb dog would be way too heavy for a hawk to pick up. Hawks are capable of carrying their own weight. This means that they can only carry about two or three pounds at most.

How to Keep Your Pets Safe From Hawks

If your pet is small enough to be hunted by hawks, you may need to take some safety precautions.

Fortunately, there are several things you can do to keep your pets safe from hawks:

These birds of prey are able to carry off some pets, but far from all of them. They also can’t carry away a baby, even though there are old scare stories of this happening.