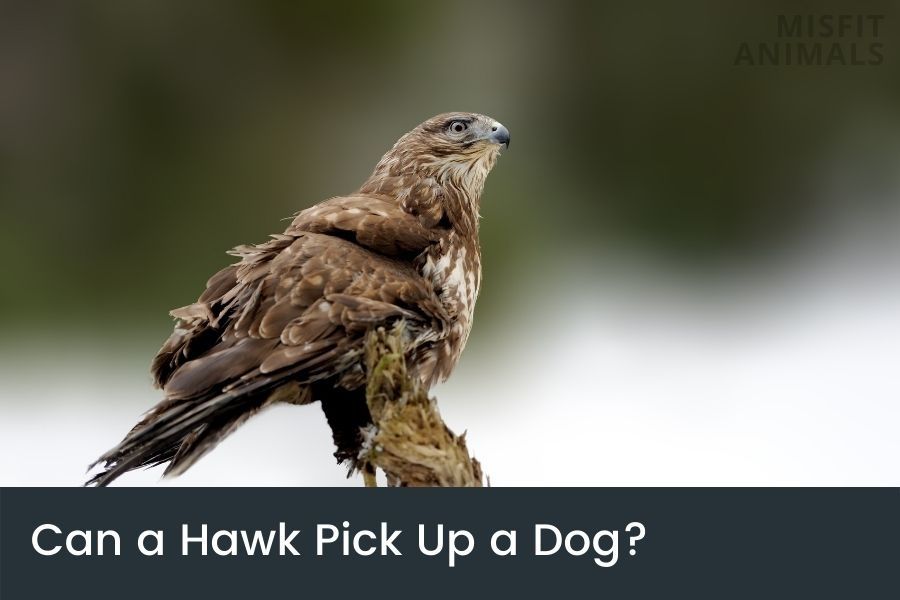 Hawks can’t pick up dogs. Most dogs, even small ones, are too heavy for hawks to lift off the ground. Similarly, most dogs are too big for hawks to attack, hence hawks keep their distance.

Hawks are hunters. As they themselves are smaller in stature, they generally target small animals. And sometimes even pets.

But do hawks attack dogs? And can a hawk pick up a dog?

The answer is, it depends.

In this article, we’ll talk more about the dangers of hawks, whether they’re a risk to dogs, if they eat dogs, and more.

Can a Hawk Pick Up a Dog?

No, hawks can’t pick up most dogs. Most birds of prey can’t carry more than their own weight in flight.

Hawks typically weigh between 1-3 pounds, while select species can grow to be upwards of 5 pounds.

Like all other animals, hawks have a maximum capacity when it comes to how much they can lift. When picking something up, they have to be able to create enough lift with their wings. While they do have strong wings, they’re only strong enough to carry something that weighs about as much as the hawk.

They’re small animals, much smaller than many dog breeds. Hence, they can’t pick up dogs.

Hawks can’t pick up 20-pound heavy dogs. Dogs of this size are way too big, and way too heavy, for a hawk to pick up. If a hawk tried, it wouldn’t go anywhere.

No, hawks can’t pick up 10 pounds of weight, whether it’s dead-weight or a dog. This is too much for the small birds of prey.

Some hawks can pick up a 5-pound dog. Select species can grow large enough to pick up 5 pounds of weight. An example is a large red-tailed hawk. While their typical maximum capacity is about 3 pounds, some individuals grow strong enough.

The majority of hawks are unable to pick up a 5-pound dog.

What Size Dog Can a Hawk Pick Up?

Other than dogs, hawks can pick up smaller rabbits, birds, and other small animals.

Related: How Much Weight Can a Hawk Carry?

Hawks usually don’t eat dogs, but it can happen. Hawks are carnivores and typically prey on things like rabbits, rats, mice, squirrels, frogs, and other birds. If they get a chance to prey on small pets, they will take it.

While hawks tend to hunt prey smaller than themselves, it does happen that they attack bigger prey, such as small dogs (or other pets).

They may not be able to carry them away, but they will still attack, and attempt to take them down.

Hawks will also feed on wild dogs that have already died. They eat carrion (dead animals) frequently, as they’re opportunistic feeders – they take advantage of all available food sources, as long as it’s meat.

Hawks are hunters and scavengers and often prey on various animals that are typically smaller than them.[1]

Here is a list of the animals that are a part of their diet:

There have been a few cases of hawks attacking dogs, but it rarely occurs. This mostly happens when hawks respond to a threat.

Hawks are territorial birds. They’ll protect their territory and their nest. If a dog gets too close, it may attack, almost no matter the size.

Attack tactics may include swooping down and grabbing or striking the dog’s head,  neck, chest, or legs with their talons.

Related: How do hawks attack and kill their prey?

How Do Hawks Attack Dogs?

Before attacking, hawks will typically circle in the air. They do this with the help of thermals, which is a column of rising air[2]. They use the height to scout for prey before striking.

Related: Why Do Hawks Circle Their Prey?

If they aren’t circling, they’ll be sitting in a tree, waiting for prey. They’re very patient animals and can stay still in a tree for multiple hours.

Dog owners who let their pets outside should beware of hawks. Hawks are opportunistic hunters known for preying on small animals, including some pets.

Hawks are expert aviators that can soar high into the sky or dive-bomb prey and turn and bank and change direction in a fraction of a second.

With an incredible sense of sight that allows them to judge the distance, speed, size, and shape of their prey, they swoop down on unsuspecting dogs.

Can I Shoot a Hawk Attacking My Dog?

No, you can not shoot a hawk, even if it’s attacking your dog. This is against the federal law protecting hawks.

The Migratory Bird Treaty Act (MBTA) protects many bird species (except pest birds like house sparrows and starlings). The MBTA prohibits any person to take, possessing, transporting, selling or purchasing migratory birds or their parts (feathers, nests, or eggs), except under very specific circumstances like hunting.[3]

Migratory birds are not the only ones protected by this act; non-migratory species are also protected.

There are no exceptions when it comes to hawks. You can’t shoot or kill them. It will be considered a violation of the MBTA and you will be liable for penalties if caught by federal officials.

Are Hawks a Danger to Dogs?

While it is true that dogs can be attacked by hawks, this occurs very rarely. Hawks are typically not a danger to dogs because they typically only prey on small animals like rabbits or mice. That being said, there are some circumstances where hawks may attack dogs.

How to Protect Your Dog From Hawks

If you own a very small dog, or simply want to take extra precautions, there are some things you can do to keep hawks away.

Here are a few tips to help you protect your dog from hawk attacks.

One of the easiest ways to protect your dog from a hawk attack is by supervising your dog when they are outside. This is especially true for pups, as these are typically small enough for hawks to grab.

However, hawks tend to stay away from humans. By accompanying your dog, you can make sure it’s safe.

If a hawk approaches, you can scare it away by making loud noises and clapping.

2. Don’t Feed It Outside

If you feed your dog outside, you may as well invite hawks into your yard. The food scraps will attract wild animals, as they’re always looking for food. This includes birds of prey.

While the hawk may only be after your dog’s food, it may fight your dog over it, which can result in injuries.

Rather than dealing with hawks after they’ve invaded your yard, you can use tools like noisemakers, ultrasonic bird devices, or fake owls to keep them away in the first place.

These devices will scare hawks away – they typically won’t come back once the deterrent is in place.[3]

4. Remove Food Sources From Your Yard

Another way to protect your dog from hawks is the avoid attracting hawks in the first place. If a hawk settles in your yard, it’s because there’s something it wants. Usually, it’s food.

Hence, removing any possible food sources from your yard can prove beneficial in your fight to protect your yard.

If you can’t seem to get rid of hawks, even after cleaning up and installing a deterrent, you can always build an enclosed space for your dog to roam around in.

This space should have some sort of wiring, or netting, on the outside to prevent hawks from entering. It should also have a roof.

Although it is not common, hawks have been known to pick up very small dogs. The majority of dogs are too heavy for hawks to carry, but pups and small dog breeds may be at risk.

Hawks can generally only carry about their own body weight. As most hawks weigh between 1-3 pounds, this is their maximum capacity.

While hawks can’t pick up dogs, they may still attack them. Hawks are known to occasionally pick fights with larger animals.