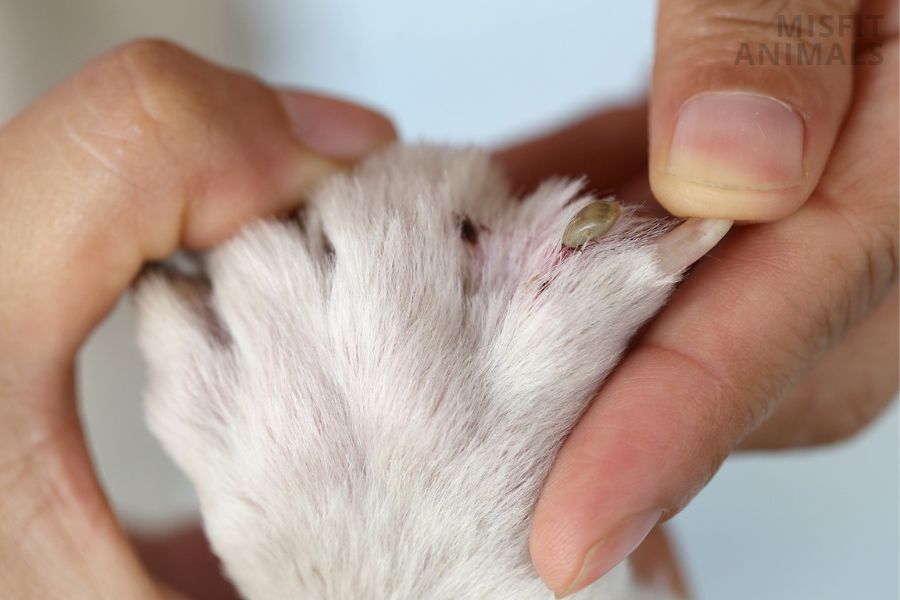 An infected tick can make you or your dog sick when it’s feeding. For Lyme disease to be transmitted, an infected tick must be attached for at least 36 hours, while for ehrlichiosis, it can take three to six hours.

That’s why it’s important to know how long ticks have been attached.

Not all species of ticks transmit the same diseases though.

For example, Lyme disease, which is feared by everyone, is transmitted only by black-legged ticks or deer ticks.

In this article, you will learn how to identify ticks based on their feeding stage, how long ticks feed, how to tell how long a tick has been attached to your dog, and more.

Ticks are external parasites with four life stages: egg, larva, nymph, and adult. They feed on the blood of hosts, including humans and dogs. The nymph and adult of some species of ticks can transmit various diseases if they are infected.

Ticks are active all year round due to the mild winters in some regions but are most active from March to October. They are hematophagous mites (feed on blood) from the family Ixodidae (hard ticks) and Argasidae (soft ticks).[1]

These small parasites vary in appearance based on the stage they are in.

A female tick can lay up to 5000 eggs at a time in early spring. After the egg hatches, most species of ticks have three hosts – one for each life cycle, but the brown dog tick (Rhipicephalus sanguineus) prefers to feed on the same host during all three life stages.[2]

When a tick larva hatches, it starts looking for a host to feed on. If it feeds on a host carrying dangerous diseases, it becomes infected and stays like this until the adult tick dies (infecting the following hosts).

After finishing feeding, the larva drops off the host and looks for a place to molt and turn into a nymph.

Nymphs follow the same pattern as tick larvae: they feed, molt, and evolve. In this stage, ticks differentiate sexually, becoming males or females.

Most female ticks become full of blood (engorged) before they mate; they need the energy to reproduce and lay eggs, after which they die. Adult males do not usually become engorged; they mate with one or more female ticks and then die.[3]

How to Identify Ticks on Dogs in Different Feeding Stages

The easiest ticks to identify are engorged ticks. If a tick on your dog looks like a small grape, it is most likely full of blood. For it to reach this stage, it must have been attached for at least three days.

Ticks have different sizes, depending on their development stage, how much they feed, and their sex.

It can take up to 3-5 days for larvae to complete feeding. They are the size of a grain of sand[4] and you can barely see them, no matter the amount of blood they have ingested.

Unfed tick larvae are light-colored, and some can even seem translucent. They will darken as they feed.

For nymphs to become engorged, they have to stay attached to the host for 2-3 days. It is difficult to differentiate between fed and unfed nymphs, as they are about the size of a poppy seed. Engorged nymphs will be rounder and be double or triple the size of unfed ones.

Regarding their color, nymphs look like miniature adults. When they are unfed, they are dark-brown or reddish-brown, depending on the species. The nymphs’ abdomen turns green or silver when engorged.

Partially engorged ticks are big but have a wrinkly appearance (they look like a raisin). If you find a wrinkly-looking tick, it has been attached for less than four days.

Engorged ticks are usually females as male ticks rarely feed until they become full of blood.

Adult ticks vary in size depending on their sex and species. Male ticks are smaller than females, except in the case of brown dog ticks where they are about the same size.

Unfed adult deer ticks and brown dog ticks are as big as a sesame seed, while the American dog tick is as big as an apple seed. When they become engorged they can reach about one centimeter in length (~0.4 inches), depending on their species.[5]

How Long Do Ticks Feed?

Ticks usually feed until they become engorged if they’re not disturbed. They can still remain attached for a few more days after becoming engorged. Some adult ticks can stay attached for 7-10 days.

Related: How long do ticks stay on dogs?

How Long Does It Take For a Tick to Become Engorged?

The time it takes a tick to become engorged varies, depending on its evolutionary stage.[6]

It’s impossible to say exactly how many days a tick has been attached to your dog. To form an opinion, it usually takes between three to seven days for an adult tick to become engorged, appear large, and develop a green or silver tint.

An adult tick needs at least three days to become engorged. The degree of engorgement reflects the time the tick was attached to the host.

Sometimes a tick can stay attached to a host for up to ten days.

The same explanation goes for tick nymphs. It takes around three days for a nymph to fully engorge. If you find a nymph on you or your pet, it is safe to say that at least two days have passed since it attached itself to the host.

How Long Does It Take for a Tick to Infect Your Dog?

It takes at least 36 hours for a tick to infect your dog. Not all ticks transmit diseases, as they have to carry pathogens to do so.

Tick larvae can’t infect their host. The larva has to take its first blood meal from an infected host. If the host carries multiple pathogens, the larva can become infected with all of them. The infected larva then drops off and searches for a place to molt and evolve into a nymph.

A nymph feeds for 3-5 days until it drops off and molts into an adult. During this time it can transmit diseases to humans and pets.

It takes at least 36 hours for adult ticks to infect a dog with diseases.

Not all species of ticks transmit the same diseases. For example, the black-legged tick (deer tick) is the only species that transmit Lyme disease to humans and pets. It can also transmit babesiosis and anaplasmosis.

How to Prevent Ticks

The most effective way to prevent ticks is to apply acaricides on your dog and in your garden and home. There are several products available, such as spot-on pipettes, collars, or chewable antiparasitic tablets. Powders and shampoos are not as effective, and sprays are used to treat fleas and ticks on the spot.

Spot-on pipettes are the most commonly used products because they are easy to apply and affordable. They are efficient for four or eight weeks, depending on the brand. They can also help treat a dog with fleas and ticks.

Antiparasitic collars are usually used more for prevention than as a treatment. They are effective for up to eight months, depending on the product. Due to the residue they leave, your pet, you, or a family member can become intoxicated if ingested.

Chewable tablets are usually administered to dogs sensitive to topical products. Their effect lasts for five weeks and gives little to no adverse reactions.

Related: How to Prevent Ticks on Dogs

Do Ticks Die After They Bite a Dog?

Do Ticks Fall off Dogs?

Yes. After a tick finishes feeding, it drops off the host and searches for a place to molt or lay eggs. The feeding time depends on the life stage: a larva will drop off after at least three days, a nymph after five days, and an adult tick can drop off even after ten days.