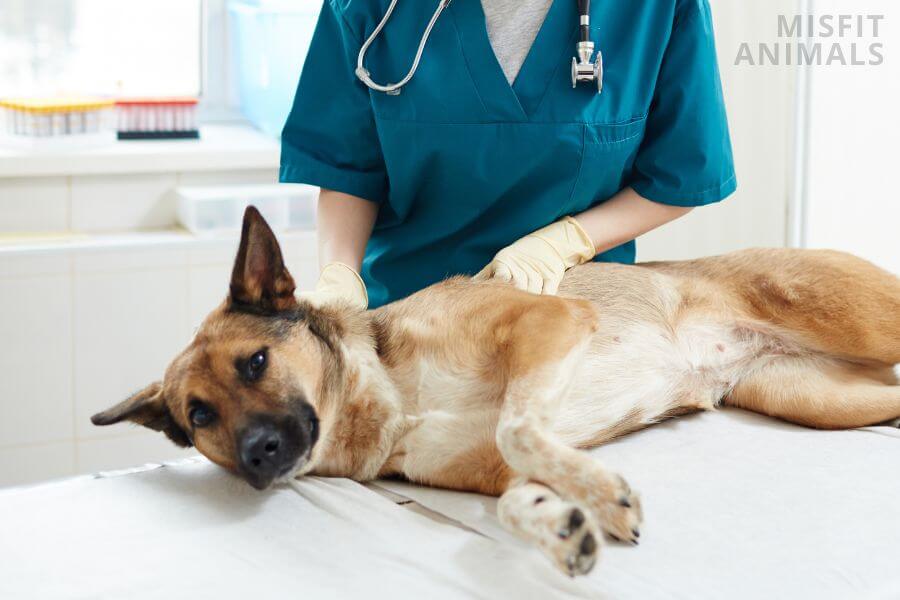 Ehrlichia spp. is a rickettsia transmitted through tick bites, which causes ehrlichiosis in dogs and humans. The pathogen targets and infects the white blood cells. Ehrlichiosis can become dangerous if not detected and treated in time.

Infected ticks are dangerous because they can transmit a variety of diseases to you or your dog, including ehrlichiosis.

Ehrlichia is a microorganism that passes from one host to another through tick bites. It has a preference for white blood cells, and because of this, it is difficult to destroy. Most antibiotics do not penetrate inside the cells.

Dogs infected with Ehrlichia after a tick bite develop symptoms of an infection, usually manifested by fever, apathy, and lack of appetite.

As the disease progresses, the symptoms aggravate.

Ehrlichiosis is not considered dangerous if it is detected and treated in time, the prognosis being very favorable.

In this article, you will learn about ehrlichiosis in dogs, what this disease is, how it is transmitted, what the symptoms are, and much more.

Ehrlichiosis is a tick-borne disease caused by the bacteria rickettsia Ehrlichia spp. It targets and infects the white blood cells of the host, including humans and dogs. Ehrlichia canis is the most common rickettsia that causes ehrlichiosis in dogs, but other types also exist.

Ehrlichia is named after Dr. Erlich, the physician and scientist who was the first to describe this microorganism.[1]

This microorganism is a rickettsia, a group of pathogens that is in the position between viruses and bacteria.[2]

Ehrlichia causes ehrlichiosis in humans and dogs. There are many species of Ehrlichia, but the ones that affect dogs are E. canis (very common) and E. ewingii (less common).

These microorganisms attack monocytes, a category of white cells with a round nucleus that the body uses in chronic infections.

How Is Ehrlichiosis Transmitted?

Ehrlichiosis is transmitted through the saliva of infected ticks when they feed on a host. Not all species of ticks transmit this disease.

Ehrlichiosis is transmitted through saliva. Ticks inject this saliva when they feed.

Only a select few species of ticks transmit ehrlichiosis to dogs:

Ehrlichiosis can be transmitted 3-6 hours after a tick has attached to your dog.

Ehrlichia can be present in ticks’ salivary glands and gut cells[3]. When a tick feeds, it injects saliva and ingests blood in an alternate pattern through the same tube.[4]

This microorganism is ingested by the tick larva at its first meal during feeding from an infected host. Then Ehrlichia reaches the tick’s midgut, from where it crosses the digestive epithelium and invades the internal cavity of the body.

From there, the bacterium penetrates the epithelium of the tick’s salivary glands, waiting to be injected along with the saliva into the next host.

This mechanism of action (pathogenesis) is valid for all tick-borne pathogens, not only Ehrlichia.

Symptoms of ehrlichiosis range from mild to severe, including fever, apathy, abnormal bleeding, arthritis (in E. ewingii infections), neurological signs, and others. Ehrlichiosis has three phases: acute, subclinical, and chronic, each typically worse than the previous.

Ehrlichiosis has an incubation period of 8-20 days and is characterized by a wide variety of symptoms.

The symptoms of ehrlichiosis depend on several factors:

Ehrlichiosis can occur in dogs of all ages and has no sex predisposition.[6]

The severity of the symptoms increases as the disease progresses. The symptoms are also unspecific. It is very difficult for a veterinarian to diagnose ehrlichiosis without the use of blood tests.

The disease has three phases, which are not always easy to distinguish:

The acute phase may go unnoticed due to the mild symptoms. It lasts about a month, during which time you may notice the following symptoms:

The subclinical phase lasts between two and three months and can evolve in two ways, depending on the initial health status of your dog:

Some dogs can stay in this phase for months or even years.

This phase generally occurs 2-4 months after the tick bite and can be benign for some dogs (they no longer show any symptoms). Dogs without symptoms are called healthy carriers of Ehrlichia canis.

The following can be noticed in dogs with symptoms:

In the case of German shepherds, aplastic anemia[7] can occur (the body does not produce enough new blood cells). The prognosis for these dogs is unfavorable.

The diagnosis of ehrlichiosis is difficult to make based on clinical signs alone. It is necessary to perform blood tests for a correct diagnosis, such as blood count, blood smear, and blood biochemistry.

To perform a diagnosis, the veterinarian will first review your dog’s medical history in detail. A clinical examination and blood tests are also done. A complete blood count can reveal a low number of platelets and red and white blood cells.

The doctor will also ask you a series of questions about your dog’s health:

There are also rapid diagnostic tests that can confirm a possible suspicion of ehrlichiosis.

If the doctor is lucky, and Ehrlichia is developing, they can see it under a microscope on the blood smear in the white blood cells.

The treatment of ehrlichiosis consists of the administration of antibiotics. If it is established in the acute phase, your dog has a favorable prognosis with a high chance of recovery.

The treatment presents the best chance of success if the administration starts in the acute phase of the disease.

In the chronic phase, the antibiotic treatment is supplemented with support treatment for the vital functions of your dog.

Always prevent ticks on your dog to avoid this situation.

When to Call the Vet

Call the vet if your dog starts to refuse food, loses weight, or has a fever. These can be signs that your dog is infected with Ehrlichia, especially if they recently had ticks.

It is a good idea to keep your pet under observation for a few weeks, if you find and remove a tick from your dog. From the first signs of ehrlichiosis, it is recommended to go to the vet.

Consult the veterinarian if your dog stops eating, loses weight, or has a fever. These symptoms can occur 8-20 days after your pet has been bitten by a tick.

Is Ehrlichia in Dogs Curable?

Ehrlichiosis in dogs is curable if detected in the acute phase. The chances of healing are high if the antibiotic doxycycline is administered. The treatment is long-lasting (a few weeks).

How Serious Is Ehrlichia in Dogs?

Ehrlichia causes a long-lasting, chronic infection. This infection can recur if the dog has a weak immune system. Some dogs no longer have symptoms and are called healthy carriers, being able to transmit the microorganism to the ticks that bite them.

How Long Does It Take a Dog to Recover From Ehrlichia?

Antibiotic treatment is long-lasting and can last up to six weeks for your pet to heal completely. If your dog is in the chronic phase of the disease, it may be prescribed other medications in addition to antibiotics, such as androgenic steroids. They help stimulate the production of erythroid progenitors in the bone marrow.

How Do I Know if My Dog Has Ehrlichia?

Ehrlichiosis is not a disease that can be diagnosed based only on the dog’s symptoms; other tests are also needed. If your dog has a fever, enlarged lymph nodes, bleeding, bruising on the abdomen, or lack of appetite, see a veterinarian immediately.