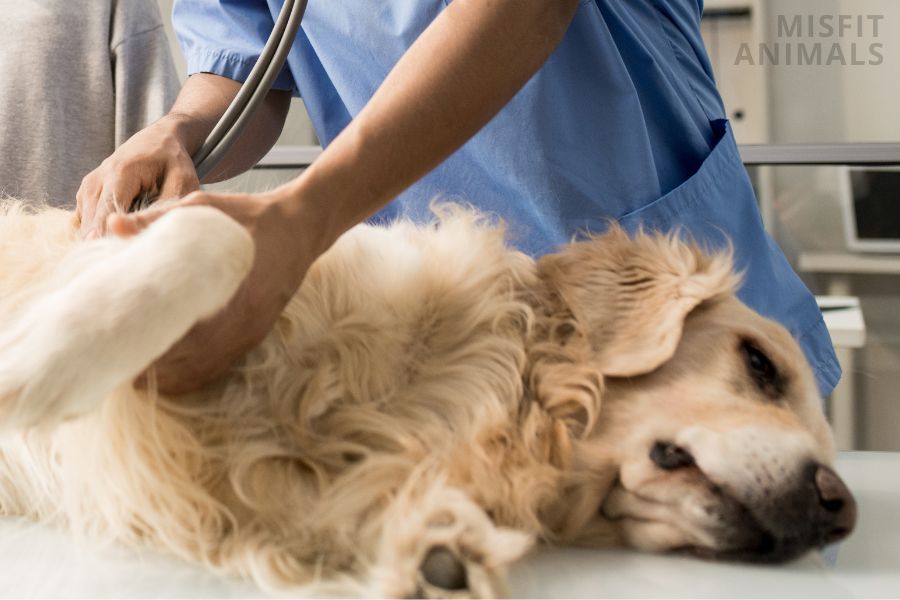 Lyme disease is transmitted by Deer ticks and caused by the Borrelia burgdorferi bacterium. One of the most common clinical signs is arthritis. Some dogs don’t show any symptoms for months. The disease can have severe health implications and, in rare cases, be fatal if not treated in time.

Finding a tick on your dog is a very unpleasant experience. You can never know if the tick is infected with various pathogens.

Fortunately, not all dogs transmit diseases.

And only a few species can transmit Lyme disease: deer ticks or black-legged ticks.

These ticks prefer deciduous forests, tall meadows, or shrubs. So be careful when you go hiking or in the park with your dog.

What Is Lyme Disease?

Lyme disease or borreliosis is a medical condition caused by the spirochete bacterium Borrelia burgdorferi. This disease is known to be the most common tick-borne disease in the United States. Lyme disease can be difficult to detect and can cause serious health problems. It is recommended to prevent infection through appropriate preventive measures.

Lyme disease was first recognized in humans in 1975. The discovery was a result of an outbreak that appeared to be acute arthritis in many rural communities in southeastern Connecticut, including Old Lyme.[1]

The disease is caused by the spirochete bacterium Borrelia burgdorferi which was first described in 1981 by the scientist William Burgdorfer.[2]

Lyme disease affects both animals and humans and is known as a zoonotic disease. It is the most commonly reported tick-borne disease.

The infection was first diagnosed in dogs in 1985, ten years after the disease was described in humans.[3]

Lyme disease is prevalent during tick season (May-August), with a threshold level in July. Ticks can still be active during the winter, as long as the temperature is above 0°C/32°F.

It can be difficult to detect Lyme disease in dogs, as only 10% of them develop symptoms.[4]

How Is Lyme Disease Transmitted?

Lyme disease is transmitted through the bite of deer ticks or blacked-legged ticks. These ticks become infected with bacteria when they feed on infected mice and other small animals.

Lyme disease is commonly transmitted by the following species of ticks:

The first step of Lyme disease pathogenesis is the infection of tick larvae. A tick larva becomes infected with Borrelia burgdorferi at its first meal on an infected host. The white-footed mouse is the main reservoir of this bacterium.[5]

The bacteria then reach the tick’s midgut from where they cross the digestive epithelium, spreading throughout the body’s cavities and reaching the epithelium of the salivary glands.[6]

Bacteria are then transmitted by the next stages of development (nymphs and adults) to the new hosts they feed on.

Nymphs and adults of Ixodes ticks feed on dogs and other animals. Not every bite from a carrier tick transmits bacteria. It takes 1-2 days for a tick to regurgitate the infectious contents into the host’s blood if the bacteria are still at the midgut level.

The presence of spirochetes in the salivary glands before feeding can cause the infection to be transmitted within 16 hours of the tick attaching to the host.[7]

The risk of transmission is highest during periods when nymphs (spring) and adults (spring and fall) are actively looking for hosts.

Lyme disease in dogs is generally characterized by a sudden onset of lameness, which is often the only sign of infection. One or more joints can swell and be painful to the touch. Some dogs experience fever and other symptoms, while others don’t have any symptoms.

Some dogs with Lyme disease don’t show symptoms for 2-5 months.

After this period, dogs can experience several clinical signs:

In some cases, Lyme disease worsens, leading to renal and cardiac complications. Especially if treatment is not administered in time.

Severe kidney complications have been associated with Lyme disease in dogs, sometimes leading to glomerulonephritis – the inflammation and dysfunction of the kidney glomeruli (the filtering units of the kidney).

Kidney failure may eventually occur as the dog begins to show the following signs:

Acute cardiac syndrome can occur in rare cases, which can be fatal.[8]

The diagnosis of Lyme disease is usually based on serological tests. Other diagnostic methods include light microscopy, blood smears, or joint fluid testing. Most dogs exposed to Lyme disease do not get sick. Because of this, it is difficult to know whether or not your dog is suffering from this disease.

The diagnosis of Lyme disease is based on a combination of factors:

Even if many serological tests come out positive in the first phase, your dog may not have Lyme disease. Anti-Borrelia antibodies can be formed during a previous interaction with the bacterium, making your pet protected for the rest of its life.

Other diagnostic tests for Lyme disease:

Treatment consists of the administration of antibiotics, especially doxycycline and amoxicillin. In severe cases, adjuvant therapy is also needed to support the dog’s vital functions. Treatment lasts for at least four weeks or until symptoms disappear.

The success of treatment depends on the precocity with which it was administered. In addition to antibiotics, painkillers can also be prescribed to dogs that suffer from joint pain.

Treatment may not completely eliminate the bacteria from the dog’s body, but it can help reach a state where there are no symptoms, similar to that of dogs that show no signs of infection.

If kidney disease is present, a longer administration of antibiotics is usually required, along with additional medications for kidney disease.

You can prevent Lyme disease in your dog by applying antiparasitic products regularly. There is a wide variety of products to choose from: collars, spot-on pipettes, chewable tablets, or sprays.

There are many ways to prevent ticks on dogs.

The most common advice is to look for ticks on your pet after each walk. Ticks don’t have time to infect your dog if you remove them immediately after they attach.

Ticks in the nymph stage are tiny and difficult to spot. Recheck your dog for ticks several days after long walks in tall grass. As time passes, they become bigger and easier to see.

There is also a vaccine against Lyme disease in the US, but it can have many side effects and is not 100% effective. It only prevents the disease in 60%-86% of vaccinated dogs.[10]

Vaccination is only effective in dogs that have not already been exposed to B. burgdorferi. It can prevent the disease by stopping them from becoming carriers of bacteria.

The vaccine does not provide long-term immunity, so a new annual vaccination is needed (or two times per year), ideally before tick season.

When to Call the Vet

Contact your veterinarian if your dog has been exposed to tick bites and it starts to present lameness, swollen and painful joints, weight loss, or fever. There are cases when a pet may not show any clinical signs for months.

In some Lyme disease cases, pets do not develop any symptoms, making it difficult to know if they are infected with Borrelia.

It is recommended to monitor your pet for a while after removing a tick to see if it develops any strange behavior.

Pay a visit to the vet if your dog experiences lameness, swollen joints, fever, or lack of appetite.

The earlier the treatment for Lyme disease, the more likely it is for your pet to recover without complications.

Does Lyme Disease Have Long-Term Effects in Dogs?

Lyme disease can have long-term effects if left untreated. It can become chronic and lead to kidney failure, heart and neurological problems, and long-term joint pain and arthritis. In some cases, dogs don’t show signs of infection until 2-5 months after infection.

Can Lyme Disease in Dogs Be Cured?

Yes, Lyme disease in dogs is curable, especially if your dog receives treatment early. Often, after treatment, pets can show no symptoms, but the bacteria can still be present in their bodies.

Can Dogs Die From Lyme Disease?

Dogs can die if treatment is not given in time and the disease progresses with complications. A rare but fatal complication for dogs is Acute Cardiac Syndrome. Lyme disease can also cause kidney failure, which leads to death.

Can I Get Lyme Disease From My Dog?

No, you can not get Lyme disease from your dog. Lyme disease can only be transmitted through a tick bite – it is a tick-borne disease.

Is Lyme Disease Contagious in Dogs?

No, Lyme disease is not contagious. It is spread only through tick bites and cannot be transmitted from dog to dog or dog to human. A dog has to be bitten by an infected tick to develop Lyme disease.

Tick bites on dogs can look like mosquito bites. They are small, red, and swollen and are visible after the tick has detached or has been removed. These local reactions occur when the body comes in contact with the tick’s saliva, which can be irritating. These marks usually disappear within a few days.

What Are the Symptoms of Tick Bites on Dogs?

After an infected tick has bitten your dog, fever, loss of appetite, weight loss, joint pain, lameness, vomiting, and difficulty breathing can occur within a few days, weeks, or months (depending on the pathogen the tick has transmitted).