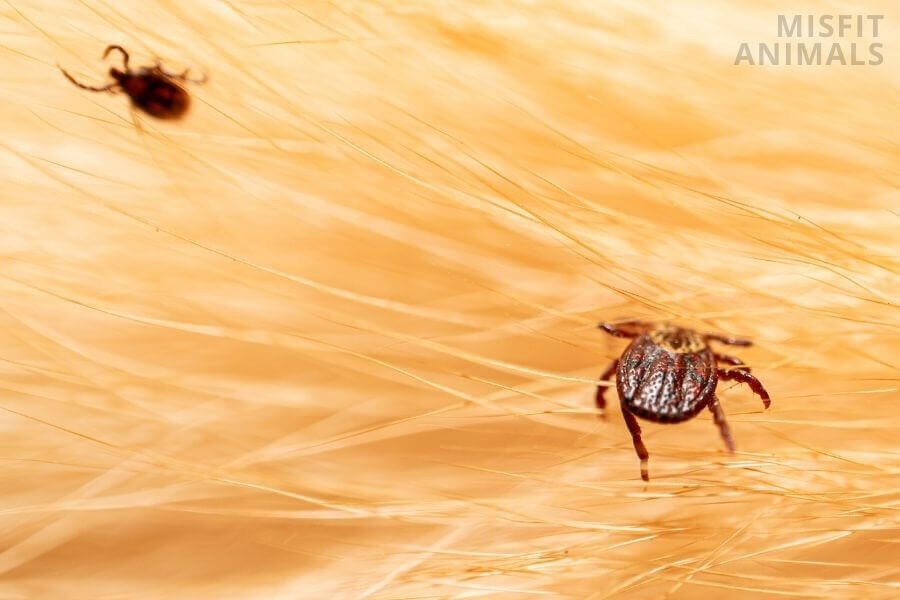 Bull’s-eye tick bites, medically known as erythema (a rash), is a distinctive mark left by a tick bite infected with Borrelia burgdorferi. This is a spirochete bacterium that causes Lyme disease in humans and dogs. The characteristic rash does not develop in dogs.

With the arrival of spring and warm weather, ticks begin to roam our forests, pastures, and gardens. Until recently, ticks were associated with walks in the woods or parks. Now, they also appear in the big cities.

Ticks can transmit diseases to dogs that do not have obvious symptoms. It is best to inspect your dog for parasites every time you come home after a walk. The tick can be small and barely visible, so it is worth taking some time to check your dog’s fur thoroughly.

This parasite can be extremely dangerous for humans and also pets, especially dogs, as they carry diverse pathogens in their bodies, which transmit a variety of diseases.

We must be careful when the warm season comes, especially with our dogs, because they are the most prone to host these external parasites.

In this article, you will find relevant information about ticks, bull’s-eye tick bites, red rings on your dog’s skin, rash, and much more.

What Is a Bull’s-Eye Tick Mark?

A bull’s-eye tick mark is a pattern left on the skin after a tick bite. These ticks are infected and transmit Lyme disease. The mark has a red center, surrounded by a clear ring with a red circle around it. It only occurs in humans.

After a tick infected with Borrelia burgdorferi has fed from a particular area, an expanding red spot (rash) that sometimes clarifies in the center, may appear in three to 30 days.

The rash spreads slowly over days and can reach 12 inches (30 centimeters) in diameter.

Ticks and Why They Are Dangerous

Ticks are ectoparasitic mites (external parasites) related to the spider – they come from the same class, Arachnida.

Although ticks are especially active from March to October, they can parasitize dogs throughout the year due to mild winters.

A dog can get ticks no matter where it lives. Ticks are usually hidden in grass. When a host passes by (dog, cat, human, and other animals), it lifts its forelimbs in the air and clings to the animal’s fur/human’s clothes or shoes.

They are most commonly found near the ears, around the eyes, under the chin on the neck, subaxillary, or paws.

Ticks are hematophagous parasites, meaning they feed on blood. Once they are in their “favorite” area, they grab the skin and cut the surface, then insert the feeding tube.

Before the feeding begins, the ticks inject saliva to overcome the innate and adaptive immune system of the host. They absorb blood and inject saliva through the same feeding tube in an alternate pattern.

Many species of ticks inject a cement-like substance, which keeps them attached firmly during feeding.

The life cycle of a tick is represented by:

They begin to feed on blood from the larval stage and, after each meal, drop off from its host to evolve into the next evolutionary phase. Ticks do this until they become adults that are capable of reproduction. The adult female lays between 1.500 to 5.000 eggs once.

Their size increases as they feed. Ticks do not fly or jump.

The most common species of ticks found on dogs are:

It is known as castor bean tick, sheep tick, or deer tick. This type of tick can transmit Anaplasma spp. or Borrelia spp., among other pathogens.[1]

It is also known as ornate cow tick, ornate dog tick, meadow tick, and marsh tick. It is the main vector of Babesia canis in dogs. [2]

It is commonly called the brown dog tick, kennel tick, or pantropical dog tick and can transmit Ehrlichia spp.[3]

The bull’s-eye mark from the gnat bite is often confused with the bull’s-eye rash caused by the Lyme disease bacteria in dogs. The latter does not occur in dogs, only in humans.

Bull’s-eye is a mark on the skin that can be caused by two different pathogens.

The gnat bite is often confused by vets with a tick bite.

One is caused by ticks and (sometimes) appears in people infected with Borrelia burgdorferi (the pathogen for Lyme disease). Dogs do not develop these red rings on their skin.

The other one is caused by small flying insects that bite (gnats) and appear on dogs’ skin as a bull’s-eye mark or a red ring at the bite site.

How Is Lyme Disease Transmitted To Dogs?

Lyme disease is caused by Borrelia burgdorferi, a spirochete bacterium that is transmitted to the host through the bite of the Ixodes ricinus tick.

Lyme disease is the most well-known disease caused by Borrelia bacteria. After a tick attaches to a dog, it takes 1-2 days to transmit Lyme disease-causing bacteria. Prompt removal of ticks is key to prevention.

The highest risk of transmission is in spring and autumn when active nymphs and adults seek hosts to feed.

Lyme disease in humans versus dogs

Lyme disease manifests differently in humans compared to dogs. 80% of people will notice a bull’s-eye red spot at the site of the tick bite and signs of mild flu. Most people who get bitten by a tick go to see the doctor for the red spot (also called bull’s-eye rash).

The red bull’s-eye area appears in three to 30 days after the infected tick bite and can vary in size.

Approximately 15% of people experience joint pain and neurological disorders, and 5% have a heart rhythm disorder.

The distinctive bull’s-eye mark does not occur in dogs, and the symptoms disappear quickly if antibiotics are administered[4]. What represents an issue in the long run, is kidney damage (glomerulonephritis).

This occurs when the immune system is stimulated for a long time by the latent infection with Borrelia burgdorferi.

Lyme disease is an asymptomatic illness that can start suddenly with lameness, often being the only sign of infection. Kidney or heart problems (rare) can also occur due to Lyme disease and are usually fatal.

Symptoms of Lyme disease begin to appear 1-3 weeks after the tick bite.

This disease is asymptomatic in 95% of infected dogs. The symptoms in others are:

*The first two symptoms can occur a few months after the tick bite.

Other clinical signs that may appear are:

Antibiotics are administered for at least two to four weeks. Amoxicillin and doxycycline are among the most effective drugs. Do not treat your dog at home without consulting a veterinarian first.

The diagnosis of Lyme disease is based on:

There are many ways you can prevent the spread of Lyme disease and ticks. The most popular and effective method is to look for ticks on your dog after each walk. Ticks transmit the infection within 24-48 hours.

Ticks have to be attached for 1-2 days before they can transmit the infection. A daily tick removal inspection will prevent the infection of many dogs. [5]

Keep ticks under control and help reduce the incidence of Lyme disease. These products can last up to 90 days.

Kill ticks and have an action of up to 30 days after a single application.

A vaccine is available in the United States that prevents Lyme disease in dogs but it may present more risks than benefits. [6]

How To Remove Ticks From Dogs?

The tick is removed with tweezers in a firm motion, as is done in humans. The entire tick must be removed, including the “head”, which can often get stuck in the skin and cause infections or other problems.

Removing a tick involves grabbing it with normal tweezers (or special tweezers for ticks) as close to the skin as possible. This way, you are sure that it is completely removed and does not remain in the skin.

Even a small fragment left in your dog can lead to infection or the development of a serious illness. The bite site should be disinfected with alcohol, betadine, or hydrogen peroxide after the removal.

If you are unsure of your removing skills, go to your veterinarian to check if the parasite has been removed correctly and that there is no infection.

Steps you need to take to remove a tick from your dog:

Ticks are external parasites that can transmit bacterial infections and endanger your dog’s life. Among the most dangerous transmitted diseases is Lyme disease, which is caused by Borrelia burgdorferi, a spirochete bacterium.

Lyme disease is asymptomatic for most dogs and treatable, especially if detected early.

The recommendation is to check your dog’s fur and body after each walk. The infection can be prevented in this way.