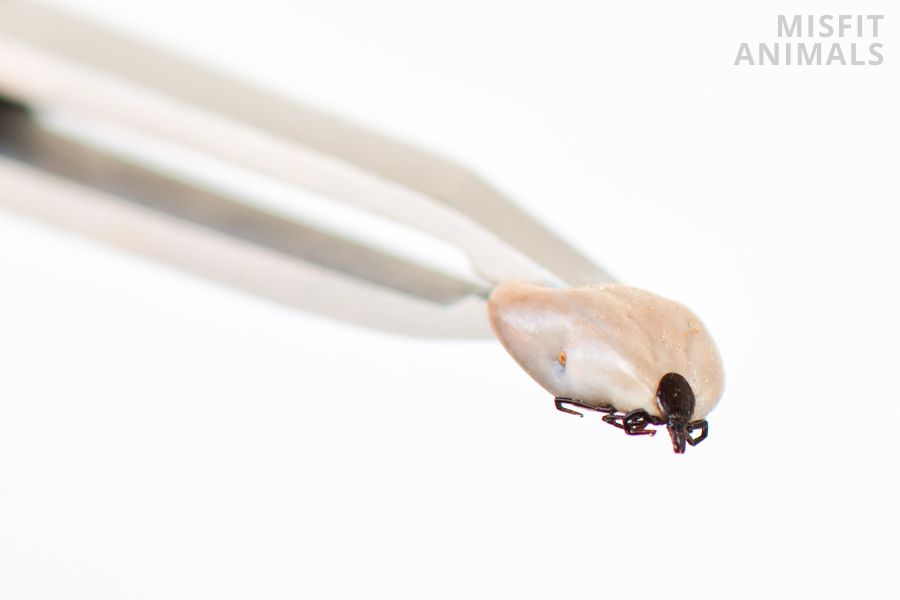 The main difference between engorged deer ticks and engorged dog ticks is the color of their legs and scutum. Engorged ticks can be easily confused with each other. The deer tick is the only tick that can transmit Lyme disease to humans and pets.

If you have found an engorged tick on your dog and want to know if it can transmit Lyme disease (or other dangerous diseases), there are a few things you can look for.

Engorged deer ticks can be easily confused with engorged dog ticks as they have a similar color when they are full of blood.

But you can tell them apart if you look at their feet or scutum.

The deer tick has black legs with a black scutum, while dog ticks have brown-reddish legs with an off-white (American dog tick) or reddish-brown scutum (brown dog tick).

In this article, we will go into detail about the differences between engorged deer ticks and dog ticks, how to identify them, and what to do if you find an engorged tick on your pet.

What Is an Engorged Tick?

An engorged tick is a fully fed tick. Ticks feed with the host’s blood. Once they have eaten enough, they become large, also known as engorged. Engorged Ixodes ticks can transmit Lyme disease, which can be fatal for pets.

Ticks have three stages of development after the egg stage: larva, nymph, and adult. Depending on their biological phase, the time it takes them to become engorged varies.[1]

A tick sexually differentiates when it turns into an adult from the nymph stage. Only adult female ticks become engorged. They do so because they need the energy to lay eggs. A female tick usually mates after it engorges.

Males do not become engorged; they mate and die right after.

Not all engorged ticks are dangerous. Only the infected ones can transmit Lyme disease to pets and humans. They also need to be attached for more than three hours before they transmit dangerous diseases.

Ticks that are not engorged are usually flat, small, and oval. They are reddish-brown or black with white spots or other markings.

Related: Engorged Tick on Dog: What To Do (Removal & Symptoms)

How to Identify a Deer Tick

Deer ticks have black legs and are reddish-brown (females) and dark brown (males). Female deer ticks have a small black scutum on their back near their head, while males’ scutum covers most of their dorsal surface. Lyme disease can be transmitted by engorged nymphs and engorged adult female deer ticks.

Deer ticks are known as “black-legged ticks” and are most often found in deciduous forests, tall meadows, or shrubs.[2]

Deer ticks live for about 2-3 years, depending on the environmental conditions. The female tick lays eggs in early spring, around 4,000 at a time. The larvae hatch in the late summer months.

When it takes a blood meal from an infected host, they are at risk of becoming infected with Borrelia burgdorferi (and other bacteria), the pathogen responsible for Lyme disease.[3]

Engorged larvae become dormant during fall. They use the blood to evolve into their next stage in life: nymphs.

Nymphs become active in spring, being more widespread in May and August. They feed on a new host to gather blood and can infect their host with various diseases if infected.

Deer tick nymphs are best known for transmitting Borrelia burgdorferi. This often goes unnoticed because of their small size (1 to 1.5 mm[4]). After their meal, deer tick nymphs molt into an adult male or female during fall.

Adult females feed once again and become engorged. Males rarely feed and instead search for an engorged female to reproduce with. The female dies after it lays eggs, while the male dies after mating.

Deer ticks are brown-orange and black and have an oval and flat body. They have long, hexagonal mouthparts and the female tick has a small scutum on its back near its head.

Adult males are smaller than females. Female deer ticks have a reddish color, while males are dark brown or black with white margins. Both have black legs. They do not have other marks on their body like many other species of ticks.

Engorged female deer ticks are greenish and you can still see the black scutum near its head.

Some dogs may have no symptoms when infected with Lyme disease, while others develop symptoms after two to five months.

You may notice the following symptoms following Lyme disease in dogs:

The differential diagnosis is often made with anaplasmosis because they have similar symptoms.

How to Identify an American Dog Tick

The American dog tick (Dermacentor variabilis) is often found in areas with long grass and tree cover. These species of ticks do not carry the pathogen responsible for Lyme disease but can transmit ehrlichiosis and Rocky Mountain spotted fever.[5]

Their biological cycle is about the same as deer ticks’. The main difference is that adult American dog ticks are at peak activity in May and June, while deer ticks are most active in October and November.[6]

American dog tick nymphs are light in color (yellowish) when unfed and are approximately 0.9 mm long. They turn gray slate when engorged.[7]

Adults are about the size of an apple seed and reddish-brown. Females have a short, off-white dorsal shield (scutum), while the scutum covers most of the males’ dorsal surface.

The differences between engorged American dog ticks and engorged deer ticks are their feet and scutum:

How to Identify a Brown Dog Tick

The brown dog tick is reddish-brown with reddish legs. Males and females are almost the same size and look alike, but the male is darker in color. Engorged females are greenish, sometimes yellowish, with a brown scutum.

The brown dog tick (Rhipicephalus sanguineus) is the most widespread tick in the world[9]. It can transmit Rocky Mountain spotted fever and ehrlichiosis to dogs.

Unfed adult brown dog ticks have an ornate abdomen, reddish-brown color, and no other markings. They have shorter mouthparts compared to deer ticks.[10]

Engorged brown dog ticks are greenish, sometimes yellowish-green, with a dark brown shield and reddish legs. You can tell the difference between them and deer ticks due to these characteristics.

If you find an engorged tick on your dog, remove it. You can do this with a pair of tweezers or special tick tools, or you can go with your dog to the vet.

Once you find an engorged tick on your dog, you need to remove it completely. Not all engorged ticks and not all species of ticks transmit Lyme disease.

To identify an engorged tick, you need to look at it carefully as only those with black legs and black scutum transmit Borrelia burgdorferi if they are infected.

There are many methods of removing ticks but the most common is by using tweezers.

To remove a tick, make sure you have gloves, tweezers, and disinfectant on hand.