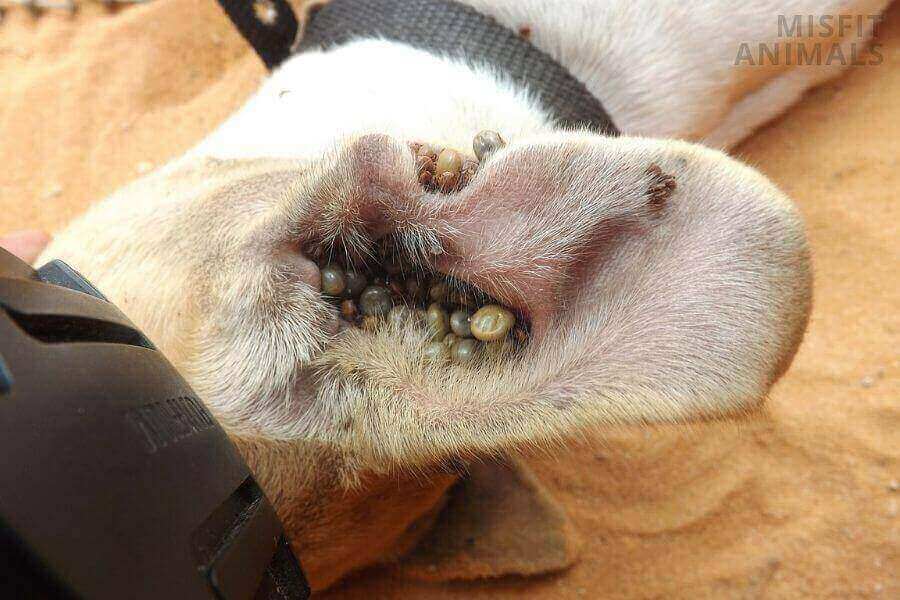 Not all ticks can kill dogs, only infected ones. There are countless species of ticks, but only a few can transmit fatal diseases to pets. At the time of feeding, an infected tick can transmit more than one pathogen to its host.

Once the warm season comes, dog owners start to worry about ticks. Ticks are active from March to October. During this time they look for a host to feed on.

Only infected engorged ticks (full of blood) transmit diseases. A tick becomes engorged between 1.5-3 days after attaching to your dog.

Tick-borne disease symptoms usually do not occur immediately after the dog has been bitten by a tick. In some diseases, the symptoms do not even occur or are barely noticeable, as it happens in Lyme disease in dogs.

In this article, you will find out if ticks can kill dogs, what tick-borne diseases are, how long it takes for a tick to kill a dog, and more.

Are Ticks Bad for Dogs?

Ticks are bad for dogs, infected with pathogens or not. In addition to transmitting various diseases to our pets, ticks can cause pain and itching at the bite site. If you have a puppy or a small dog breed that is massively infested with ticks, it can become anemic due to losing too much blood.

When feeding time comes, ticks look for a host to suck blood from. Once your dog has passed through the grass, the tick climbs on it and inserts the mouthparts into the dog’s skin to feed. The areas where the ticks attach to a dog can become red and irritated.

Some species of ticks secrete a cement-like substance, which helps them fixate. This substance can be irritating to the dog, causing local reactions.

Other species of ticks have hook-like barbs on the feeding tube, which cause pain when the tick pierces the skin with it.

Dangerous ticks are those that transmit diseases to pets. If left untreated, most medical conditions can be fatal to dogs.

Ticks can kill dogs if they infect them with pathogens. An infected tick transmits deadly pathogens when feeding on your dog. One particular species of ticks secrete a paralyzing toxin when feeding that can also kill dogs.

Through the feeding process, ticks can transmit certain infectious agents to your dog. Only larvae, nymphs, and adult females feed on blood. It usually takes up to three days for an infected tick to transmit one or more diseases.

Ticks can cause a lot of medical problems and transmit numerous diseases:

lxodes holocyclus can cause rare paralysis in dogs. Studies suggest that 5% of dogs die from tick-borne paralysis.[1] Younger dogs and those with mild forms of the disease recover faster. The size of the tick does not reflect the severity of the disease.

No method of removing ticks has improved recovery or reduced mortality, although manual removal seems to have the best results.

The paralysis is due to a toxin ticks produce during feeding. If left untreated, the disease almost always leads to respiratory or heart failure.

This species of ticks are found along the east coast of Australia and are widespread, especially around shrubs.[2]

After a dog is bitten by Ixodes holocyclus, the clinical signs appear after 5.5-7 days on average. Once the disease has occurred, the average duration is about 24 hours until the dog dies.[3]

Tick paralysis can lead to:

Tick paralysis symptoms in dogs include the following:

How Long Does It Take for a Tick to Kill a Dog?

It can take up to three days for an infected tick to transmit pathogens for common diseases. Each disease has a certain period in which it evolves and leads to severe symptoms that can cause the death of your dog.

The most common tick-borne diseases that are dangerous to dogs are babesiosis, ehrlichiosis, Lyme disease, anaplasmosis, hepatozoonosis, Rocky Mountain spotted fever, and bartonellosis. For some of them, the symptoms appear within 5-7 days after the tick bite, such as babesiosis, while others may not develop any clinical signs, such as Lyme disease.

Tick-borne diseases are considered dangerous and deadly for pets. These diseases have severe symptoms and can affect many organs.

If detected and treated early, most of them have a favorable prognosis.

Recognizing the symptoms of tick bites and the types of diseases ticks transmit to dogs could make the difference between life and death.

This disease occurs approximately one week after a dog has been bitten by a tick.

Symptoms of anaplasmosis include:

If you do not intervene quickly with treatment, the dog may die from seizures or kidney disease.

Babesiosis is caused by a parasite that destroys the dog’s red blood cells. Symptoms may appear within 5-7-14 days of the tick bite and include:

Babesiosis is a difficult disease to treat. Although blood transfusions can help your dog, they can still die from hypotension and shock.

These diseases are similar and infect dogs in the acute and subclinical stages.

Symptoms of Rocky Mountain Spotted Fever and Ehrlichia may occur within 14 days of tick bite and include:

If left untreated, these conditions can lead to the death of your pet.

A tick infected with the bacterium responsible for Lyme disease transmits it three days after attaching. About 10% of dogs exposed to this bacterium contract the disease.

The symptoms occur in 2-5 months after infection and include:

Most dogs show no symptoms. With the help of antibiotic treatment, Lyme disease is rarely fatal.

How to Prevent Ticks

There are many ways to prevent ticks, but the most popular one is to use spot-on pipettes or antiparasitic collars.

Prevention is the key to having a healthy dog. Anti-fleas and ticks spot-on pipettes are the most commonly used products in preventing ticks in dogs because they are cheap and effective.

There are many other products that can do the trick:

For more rigorous prevention, it is recommended to use antiparasitic substances in the garden and the place where the dog lives, such as its cage.

Ticks can transmit deadly diseases to pets. It is recommended to remove a tick as soon as you find it. Watch your dog for days or weeks for potential symptoms.

If your dog has any symptoms or behaves strangely, do not hesitate to call your veterinarian.