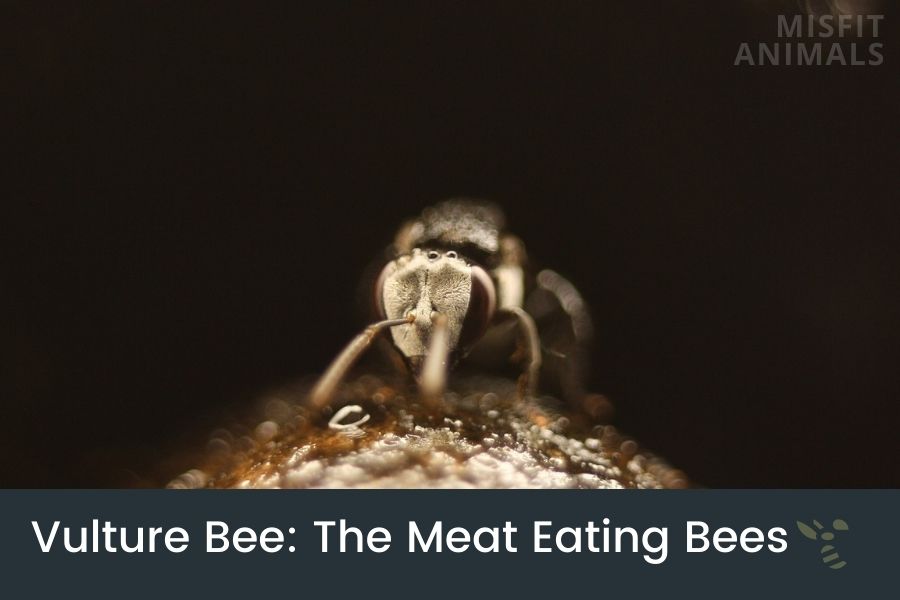 Vulture bees are a type of stingless bee that eats rotting meat and are also known as carrion bees. They are found in Central and Southern America.

These bees do produce a honey-like substance, which is not made out of nectar, but instead from a substance produced in their hypopharyngeal glands on their head.

What Are Vulture Bees?

The vulture bee is a little-known species of bee that gets its name from its unique characteristic of eating rotting meat. They’re also known as carrion bees, or meat-eating bees, again because of their unique dieting.

This type of bee is particularly interesting because it’s one of the few that can survive on a purely carnivorous diet. While other bees feed on nectar and pollen, vulture bees eat meat, carrion, and other animal matter.

Vulture bees, like vultures, feed on dead animals. Like parasites, they enter the carcass through the eyes of the animal.

These unusual bees can be found in a variety of habitats, including drylands and rainforests. They live in colonies of up to thousands of individuals, and each colony has a single queen.

Vulture bees play an important role in ecosystems by recycling nutrients from carcasses back into the environment.

Vulture bees are of the genus “Trigona” and is the largest genera of stingless bees containing 32 species.

The vulture bee is commonly known as the “meat-eating” bee. All vulture bees are part of the genus “Trigona” in the insect family Apidae.

There are three subspecies of vulture bees:

Vulture bees range in size from 8-22mm long and are reddish-black or dark brown in color, with a few pale hairs on their thorax.

They are a kind of stingless bees, meaning they don’t have stingers. Instead, they have developed very strong mandibles, which they use to tear off flesh.

This vulture bee most notably feeds on carrion, which it finds with its highly developed sense of smell. They often nest in trees and are known to build their combs very high up, making them difficult to get to.

Vulture bees are known to be very aggressive when it comes to food or nests, but they are typically not aggressive toward people.

The vulture bee is a meat-eating bee. The vulture bee primarily eats decaying animal flesh. In other words, they take part in carrion-eating, much like other vultures.

Vulture bees use meat as a replacement for pollen, which honey bees eat for protein. Vulture bees aren’t capable of carrying and storing pollen, hence pollen stores are absent in their nests.

Vulture bees also live off of a honey substance, which is made out of processed proteins instead of nectar. They store these in much the same way as honey bees.

To gain a better understanding of these bees, a study was done to research how they process their diet.

Researchers discovered that these meat-eating bees have developed a more acidic gut, which helps them break down the meat. The bees process the meat, hereafter secreting the honey-like substance.

Here’s what the experts say about the microbes in the gut of vulture bees:

“vulture bees have lost some core microbes, retained others, and entered into novel associations with acidophilic microbes found in the environment and on carrion. The abundance of acidophilic bacteria suggests that an acidic gut is important for vulture bee nutrition and health, as has been found in other carrion-feeding animals.”

Although their diet may seem strange, vulture bees have been observed gathering meat from more than 75 different species of animals, including cattle, deer, elephants, ostriches, and others.

Vulture bees are, as the name suggests, vultures. They feed off of decaying flesh, which they get from already dead animals.

When vulture bees forage for food, they will fly into the carcass of the dead animal through the eyes. When inside the carcass, they rummage around while gathering meat.

Forager bees will fly back to the nest, where they will regurgitate the meat, and hand it over to another worker bee. This bee will then process the meat and secrete a honey-like substance from its hypopharyngeal glands.

Honey bees use their hypopharyngeal glands to produce royal jelly.

Its quest for food isn’t easy because many scavengers, such as vultures and hyenas, compete for the same food.

When vulture bees forage, they make use of a pheromone trail to guide their nestmates.

This way, vulture bees can quickly recruit hundreds of foragers to help them gather meat from the carcass of a dead animal.

Vulture bees can remove all meat, only leaving the skeleton, from animals in the span of a few hours (depending on the size of the animal).

Vulture bees are primarily found in Central and South America.

These bees also live in a variety of habitats, from drylands to forests, but prefer places where there are some flowers around them.

Vulture bees do not pollinate as much as honey bees, but they do contribute a little, because of the pheromone trail used to guide other forager bees. They land on flowers and plants to spread the pheromones, carrying small amounts of pollen onwards.

They do not do so intentionally though, as they don’t use pollen for anything.

This honey-like substance is not made out of nectar, but instead from processed meat. Hence, their honey is very rich in proteins.

They secrete this substance from glands on their heads. These are the same glands that are used by honey bees to produce royal jelly.

Yes, vulture bees do make a honey-like substance, but not the honey we know from honey bees. Instead of a sweet substance with plenty of sugar, it is richer in protein.

Unlike honey bees, they don’t make surplus honey, meaning they only produce what they need. Hence, it’s very difficult to come by.

Whereas normal honey, from honey bees, is sweet and tasty, both to bees and humans, honey from vulture bees is quite the opposite. The flavor of this rare form of honey has been described as intense, smokey, and salty, or uniquely sweet.

Since vulture bees make their honey from meat, it also gets its flavors from it. It’s not at all sweet to humans compared to sugar or regular honey.

According to CNN, vulture bee honey is edible and can be harvested as a unique treat. The only problem is, as mentioned, that vulture bees don’t produce excess honey. They need all of it for themselves.

Hence, harvesting, or even just coming by, this honey can be rather difficult.

The human body can break down this honey, but not as easy as regular honey. This form of honey is complex in its structure, yet the human body does produce the necessary enzymes.

Do Vulture Bees Have Stingers?

No, vulture bees don’t have stingers. They’re stingless bees, meaning they can’t sting. They instead use their mouths when attacking, as they have very strong mandibles with sharp teeth.

What Type of Bees Eat Meat?

When most people think of honey, they think of a sweet, sticky substance that tastes great on toast or biscuits. However, vulture bee honey is not like your average honey. Some people find the taste to be unpleasant, while others find it to be somewhat addictive.