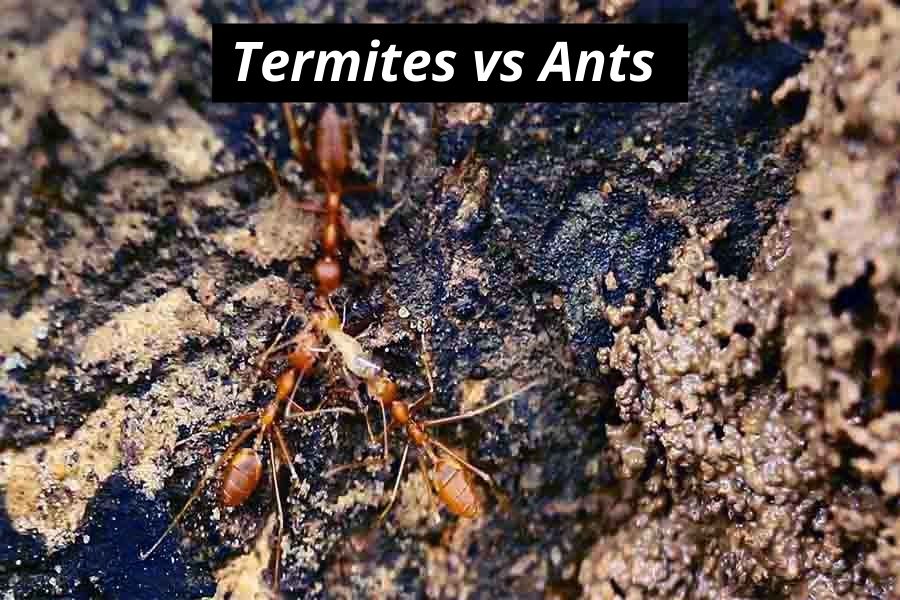 The main difference between termites and ants is their destructiveness. Termites eat wood, where ants just push it aside. This makes termites more destructive.

Termites and ants are both tiny bugs that can cause a lot of damage if they get into your home.

Termites and ants have many similarities, but termites are more destructive than ants. Ants eat dead things while termites eat the wood in your home.

When it comes down to a fight though, ants will usually win due to their sheer force in numbers.

Read on to learn more about termite vs ant differences so you can protect yourself from these pesky insects!

The Difference Between Ants and Termites

There are many differences between ants and termites, even though they’re both insects. These include:

In short: almost everything.

But, they do have some similarities as well.

Termites don’t possess wings like many types of ants. There are also similarities to be found in diet, attractants, and behavior.

An unfortunate similarity is a habit of invading homes. Both of these insects will nest in your home, creating problems for you as a homeowner. Both may also be difficult to get rid of.

When it comes down to size termites will often be 2-3 times bigger than ants. Both of them can be very small, termites around ⅛ of an inch and ants about 0.03 inches.

Both can also grow big, termites reaching 1 inch, while really big ants can grow up to 2 inches (this is only in extreme cases or for rare species).

Both ant queens and termite queens are bigger than the average of their species.

You can also check this article: How tall are ants?

When it comes to the body shape of these creatures, there are quite a few differences, the main one being their thorax (waist).

When you look at ants, you’ll notice that their waist is well defined. Their bodies are wider at the head and abdomen (front and back) than the middle.

Termites on the other hand have more of a rectangular shape. You can’t tell where their waist starts or ends.

The antennae of ants are a little different than the ones you can find on termites. An ant’s antennae are bent and longer, than the termite’s straight and short antennae.

Both species use these antennae for a bunch of things though.

Reproductive ants and reproductive termites have wings. The regular workers do not in both cases.

See more: Do ants have wings?

Both ants and termites come in all kinds of colors, from yellow to dark brown. Most people associate ants with a darker color though, either the black seen in little black garden ants or dark brown like carpenter ants.

The termites we usually think about are more of a tan, lighter brown color. They do also come in red and dark brown.

What Type of Damage Do They Cause?

When it comes to damage, termites are the clear winner.

Termites cause much more damage than ants do, and at a faster rate. These little insects have been known to destroy entire homes in just a few years due to their destructive nature.

Ants will in most cases just eat your food, or take it back to their nest if they find some.

Now, if we’re talking about carpenter ants or other wood-infesting ants, they can cause damage to your home, but they won’t cause as much destruction as termites.

Termites have been known to cause structural damage by hollowing out the wood in a home. Termites also eat wood, while ants only carve it out to fit a nest.

Both ants and termites can cause problems for you though, as both of them can mess with wires, insulation, and, as said, wooden structures. They’re both known to nest in walls, which can cause issues down the road.

While neither termites nor ants are frequent carriers of disease, living in a termite-infested home can cause allergic reactions or even asthma attacks.

Ants eat a variety of foods including plants, termites, and other insects. Most ants prefer to eat sugary substances such as honeydew and nectar.

The diet of termites consists mainly of wood but can vary depending on the species. The interesting thing is, they don’t eat wood for the sake of wood. They’re actually looking for the cellulose inside the wood.

This can also be found in plants or grass.

Apart from food, termites and ants are both drawn to decaying wood (if we’re talking about carpenter ants), moisture, and dark places to nest.

The life span of ants and termites are very different. While worker ants may only live 6-12 months on average, worker termites can live for 2-5 years. This is a very big difference.

If we’re talking queens, some ant queens can live for up to 20-25 years, while termite queens have been recorded living up to 50 years.

Termites have a much greater life span overall.

The way termites and ants behave in your home is quite different. Termites are subterranean creatures, meaning they like to stay out of sight in their nest. They eat the wood they nest in, which lets them stay hidden most of the time.

You’ll more often see signs of termites rather than the insect itself.

Carpenter ants, on the other hand, venture out to find food. They don’t eat the wood they nest in, but simply excavate it, dropping the frass somewhere out of the way.

If you have ants in your home, you’ll be able to spot them often, as they’ll have to cross through your house to find food.

Termites vs. Ants War: Who Wins?

Just because termites and ants are both insects, doesn’t mean they’re good friends. Ants like to feast on termites, as they’re a good source of protein.

It’s been seen before, that ants will invade an entire termite nest, in order to hunt down their prey.

Now, when it comes down to a fight, ants will usually be the victors. Ant colonies are much larger than termite colonies, which gives the ants a big advantage. Even though termites are often much bigger, the ants will easily take down their opponents.

Both termites and ants have colony members known as “alates” – flying members of the colony that is ready to reproduce. These are virgin queens and males.

While both can fly, there are some differences you should know.

Flying termite bodies are shaped like narrow cylinders or tubes. They can be anywhere from 1/2 an inch to 1 inch long with antennae that extend beyond the body of the termites.

Termites have oval-shaped heads with straight antennae that are about the same length as their bodies. They have soft bodies, they’re a mix of white to brown with pale legs.

Flying ants have very different appearances from termites in many ways.

Their long antennas are elbowed at a 90-degree angle making them look almost like a bumblebee. Their wings are also much larger than termite wings.

Flying ants have blackish-brown bodies with rounded heads that look almost identical to termites, but do not have pale legs.

The colors of the two insects vary depending on the species.

Termites and carpenter ants are very similar in appearance [3].

Because termite damage is often mistaken for carpenter ant damage, it’s a good idea to know the difference between the two before any treatment is done, to avoid any expensive ineffective treatment.

A good way to tell them apart is by the debris – termites eat wood, while carpenter ants will simply move it out of their nest.

Can You Use Ants to Get Rid of Termites?

Ants can get rid of termites for you, but you shouldn’t rely on ants to take care of the problem for you.

If you want to get rid of termites, you should either buy insecticides specifically for termites or even better, you can call an exterminator.

A professional exterminator will always know how to handle a termite infestation.

In conclusion, termites and ants are both insects that can cause damage to your home. However, termites and ants look very different. There are also significant differences when it comes to life span, diet, behavior, body shape, size, etc.

If you see signs of termite or ant infestation in your area contact a pest control professional immediately.