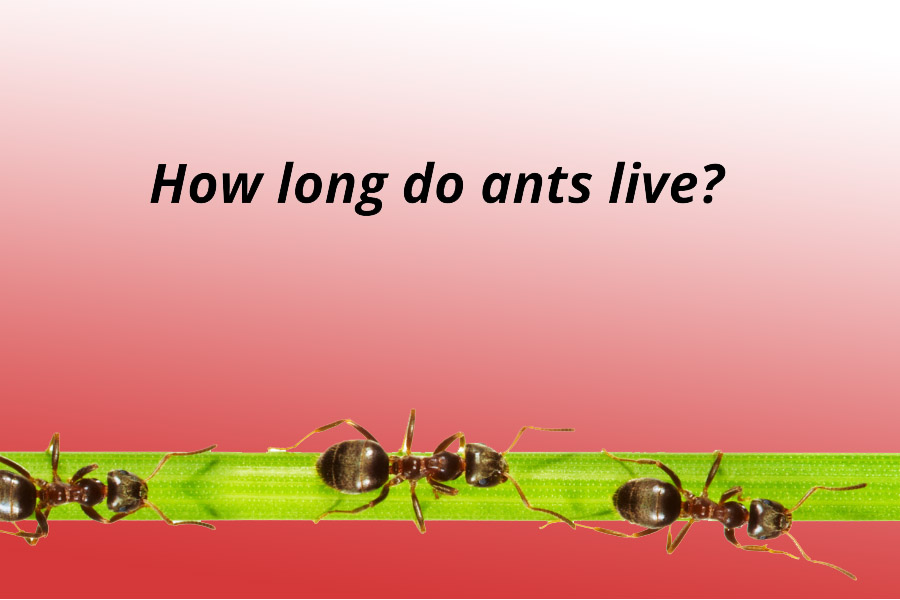 Ants live for about a year on average, though the queen can live up to 15 years for some species. The workers typically only live for 4 to 12 months.

Ants are some of the most resilient insects. They can survive in an array of environments and live anywhere (except Antarctica).

However, how long ants live depends on several variables; different types of ants will have different life spans, what predators are around, and the food availability.

The average ant lifespan is about six months, but many factors contribute to how long do ants live – which we’ll explore below!

What Is the Life Cycle of Ants?

Ants are eusocial insects, which means they have a complex social structure. Most ant colonies live in nests that can be above or below ground. Ants typically go through four stages during their life cycle:

Eclosion is how an insect emerges from its chrysalis as the adult form of the species after it has gone through metamorphosis inside its cocoon-like shell (which may last days or weeks).

The lifespan of Different Ant Species

While the lifespan of an individual depends on how it is affected by its environment, different species tend to have similar life spans.

According to experts, most ants live for about one year, although queens can live up to 15 years.

Workers usually only survive for four or five months during their active phase and hibernate through winter before dying at the end of spring).

Ants that produce males and females will mate once and die shortly after mating occurs. The fertilized female ants enter diapause (a period where growth slows down) until they give birth next springtime when food sources increase again such as aphids blooming early in summertime.

The average life span of a black garden ant is about 4 years.

The black garden ant is the most common type of ant found in the United States. They are usually around ¼ to ½ inch long with dark brown bodies and orange legs, but they can also be black. Their diet mainly consists of honeydew, but they are known to take meat when the opportunity arises. They live in large colonies that work together to find food and protect their nests against invaders.

The carpenter ant is one of the most common types that can be found in North America.

These ants have a lifespan of about two years, where they spend their time working on finding food and taking care of larvae.

Fire ants are known for how quickly they can form large colonies. A single colony of fire ants is capable of having over 100,000 members!

While many ant species live about a year, depending on how much work the queen has to do keeping the population alive and growing, some queens have been recorded living up to 20 years or more.

Ghost ants are small ants that range in color from pale yellowish to light brown. They have a transparent outer covering of their bodies which makes them difficult to see on countertops or other surfaces where they might be foraging for food.

The workers and queens of this species both only live about 12 months, but the reproductive period is much shorter at just three weeks.

These ants will only live for a year or so. The reasons that they die include disease and starvation, as well as the fact that many of them are killed by predators such as birds and other insects.

Pavement ants are considered to be one of the most common household ants in North America. As for how long do they live, their lifespan is about two years and includes a colony cycle that lasts between three and six months.

Pharaoh ants are one of the most common ant species in North America. Females can live for up to two years, while males only survive about five months on average.

There are a few reasons why ants might be flying. First, they could just be swarming because it’s how ants communicate and warm up their bodies.

The flying ants are males (or queens ready to mate), and their sole purpose is to mate with the queen. When this is done, they die, hence their life span differs a lot.

In the summertime, many colonies have queen ants that take off from the nest to mate with nearby males from other nests. Once she has mated with multiple males (in what is known as polygyny), her eggs will fertilize quickly and produce thousands of worker offspring back at the original colony!

Flying male ants can also help defend or attack another species’ territory by protecting or killing rival queens in an attempt to establish dominance over a certain area.

The average lifespan of the bullet ant is about one year, but some specimens have lived several times longer than that.

Harvester ants are the most populous type of ant in North America. Their colony can live for 15-20 years, but the workers usually last about a year.

The worker ants of this type usually live for 10 – 12 months.

Argentine ants are one of the most common ant species. They can be found all around the world, but their home is in South America. There are multiple colonies of these ants living near each other, with millions upon millions of worker ants spreading out across a large area.

What Are the Causes of Ant Deaths?

Ants die from a variety of causes. Some common causes include:

How Long Do Queen Ants Live?

Most ants are sterile female worker ants. The main job of these workers is to take care of the queen ant and ensure her survival so that she can produce more eggs.

The queen ant is the only one that can lay eggs, which is why she’s so important to the colony. She’ll typically live for anywhere between 5 to 15 years.

How Long Do Ants Live Without a Queen?

Ants will not die without a queen. They can survive for several months to more than a year, as long as they have food and resources available, but how long will depend on the species of ant.

Some ants are solitary insects that only live inside rotting wood or underground, so their lifespans may be shorter than other types of ants which can last for years if there is no threat in the area.

Larger colonies with multiple queens tend to live longer due to better protection against predators and disease within the colony itself.

How Long Do Ants Live Without Food and Water?

All ants need water to survive since they are very small insects. If an ant is deprived of access to water, it may die within 24 hours or less depending on how hot it is outside and how much moisture exists in its environment.

All ants require food for energy but not all species eat different things. Some types of ants only come out at night while others feed off sweet substances like nectar, fruits, sap from trees, etc.

Ants that have more specific diets might only stay alive up to a few weeks without their favorite foods whereas other generalist ant species can live several months without any nourishment besides liquids if necessary because they don’t mind eating dead bugs or even!

Related: How long can ants live without food and water?