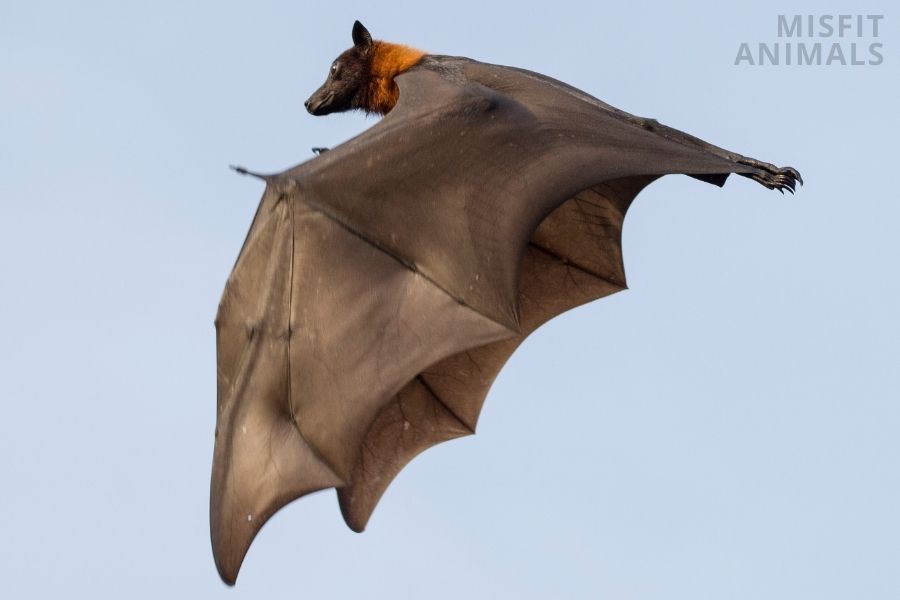 When you think of animals with wings, the first creatures that come to mind are probably birds.

But did you know that there are many other animals with wings that can fly?

Bats, insects, and even some mammals can take to the sky. Here is a list of 10 animals with wings that can fly, that aren’t birds.

There are many animals with wings, but there is only a handful that can actually fly.

Birds are the most well-known flyers, but they’re not the only ones. Bats, insects, and even some lizards can all take to the air.

Here are some of the animals with wings that fly, that aren’t birds:

The Colugo is a mammal. This creature is found in Southeast Asia and is often confused with a bat due to its similar appearance.

The Colugo is also known as a “flying lemur,” although it doesn’t technically fly. Instead, it glides from tree to tree using its large, furry tail and webbed feet[1].

It’s an expert at this, able to cover up to 150 meters in a single glide.

While the Colugo is interesting to watch, it’s also an important part of the ecosystem. These creatures help disperse seeds and pollinate plants, which helps keep the forest healthy.

The flying fish is another unique creature that can fly without wings similar to birds. Not only can it fly, but also swim.

The flying fish is found in tropical and subtropical waters all over the world. It has long, narrow pectoral fins that it uses to glide through the air. When it reaches the water, it uses its tail to propel itself forward.

Flying fish can grow to be up to 16 inches long. They are usually silver or blue in color with dark spots on their sides. Their diet consists of small crustaceans, mollusks, and other small fish.

The Flying Fox is a species of bat native to Australia and New Guinea. The name “Flying Fox” comes from their long, fox-like snout.

As their name suggests, these bats are able to fly using their wings.

There are three subspecies of Flying Foxes:

All three subspecies are listed as “vulnerable” by the International Union for Conservation of Nature (IUCN).[2]

The flying squirrel is a small, nocturnal, arboreal rodent that is found in North America, Europe, and Asia. They are the only member of the family Sciuridae that can fly.

Flying squirrels have a furry membrane called a patagium that extends from their wrists to their ankles, which allows them to glide through the air[3]. They can glide up to 160 feet (49 m) and land without injury.

They are not capable of true flight.

Most squirrels are diurnal, but not the flying squirrel. This squirrel is nocturnal, meaning they are most active at night. During the day, they sleep in nests that they build in tree cavities or abandoned bird nests.

They are social animals, living in groups of 2-20 individuals. They communicate with each other using vocalizations, body language, and scent marking.

Bees are flying insects closely related to wasps and ants, known for their role in pollination. The best-known bee species is the western honey bee, known for producing honey and beeswax.

Bees are a monophyletic lineage within the superfamily Apoidea and are presently considered a clade, called Anthophila.

There are nearly 20,000 known species of bees in seven to nine recognized families, though many are undescribed and the actual number is probably higher. They occur on every continent except Antarctica, in every habitat on the planet that contains insect-pollinated flowering plants.

Some bee species including honey bees, bumblebees, and stingless bees live socially in colonies. Bees are adapted for feeding on nectar and pollen, the former primarily as an energy source and the latter primarily for protein and other nutrients.

Most pollen is used as food for larvae.

Bees have a long proboscis (tongue) that enables them to obtain the nectar from flowers. They have antennae almost universally made up of 13 segments in males and 12 in females, as is typical for members of the superfamily Apoidea, though a few groups have considerably fewer.

Related: How Do Bees Fly?

Draco lizards are rare “flying” reptiles. As with many other animals, they are not capable of true flight but gliding flight. They can glide long distances using the webbing on their bodies.

There are several different species of Draco Lizard, all of which are native to Southeast Asia. The most common and well-known species is the Common Draco Lizard (Draco sumatranus), which is found in Indonesia, Malaysia, and Brunei.

These lizards get their name from their ability to glide using the “webbing” between their front and back legs. When they jump off of a high place, they can open up this webbing and catch the wind, allowing them to glide for up to 50 meters (160 feet).

While they are in the air, Draco Lizards can change direction by simply shifting their weight. This makes them very hard to catch if you’re not a professional lizard wrangler.

Sugar gliders cannot fly, but they can glide. They do so using their long tail as a rudder and can reach speeds of up to 60 miles per hour. Their “wings” (twin-membrane between their limbs) are covered in a bright, iridescent color that helps them blend in with their surroundings.

These fascinating animals are found in the tropical rainforests of South America and Southeast Asia. They are proficient climbers, and often nest in the hollows of trees.

Flying Phallangers are nocturnal animals, and their diet consists mainly of insects. They use their long tongues to capture their prey.

Snakeflies are found in tropical forests and can glide from tree to tree using their wing-like skin folds. Though they can’t fly like birds, they are still proficient at getting around their environment using the air currents.

There are several species of gliding snake, but the most well-known is the Chrysopelea ornata. This species is found in Southeast Asia and can grow up to 3 feet in length.

Gliding snakes are able to flatten their bodies and extend their ribs to create “wings” that help them glide through the air.

While they may look like they’re flying, gliding snakes are falling slowly. They use their “wings” to control their descent and can glide up to 100 feet in a single jump.

The Termite is a small, winged creature that is often considered a nuisance by homeowners. These little insects are known for their destructive habits, as they tunnel through wood and eat away at the foundation of homes. While they are considered pests, termites play an important role in the ecosystem.

Termites are found in tropical and subtropical regions around the world. There are over 2,000 different species of termites, and they range in size from just a few millimeters up to over a foot long.

As social insects, they live in colonies that can number in the millions.

While most people think of termites as pests, these little creatures actually perform an important role in the ecosystem. Termites help to break down dead wood and other organic matter, recycling these materials back into the soil.

This process is essential for the health of forests and other ecosystems.

The mosquito is a small, flying insect well-known for its ability to transmit diseases. Mosquitoes are found in nearly every part of the world and they can carry a variety of diseases, including malaria, dengue fever, yellow fever, and Zika virus.

While most mosquitoes are harmless, there are some species that can pose a serious threat to human health. A mosquito’s mouthparts are specially adapted for piercing skin and sucking blood.

When a mosquito bites, it injects saliva into the wound, which can cause irritation and swelling. In some cases, their saliva can also transmit diseases.

Mosquitoes are attracted to warm-blooded animals, including humans. They are most active at dawn and dusk, but they can also bite during the day.

Mosquitoes typically lay their eggs in stagnant water, such as ponds and swamps. The eggs hatch into larvae, which develop into adults in about two weeks.

What Is the Only Mammal That Has Wings and Can Fly?

The only mammal that has wings and can fly is the bat. Bats are found all over the world, with the exception of Antarctica. There are more than 1,200 species of bats, making them the second-largest group of mammals after rodents.

Are Birds the Only Animals That Can Fly?

Do Penguins Have Fins?