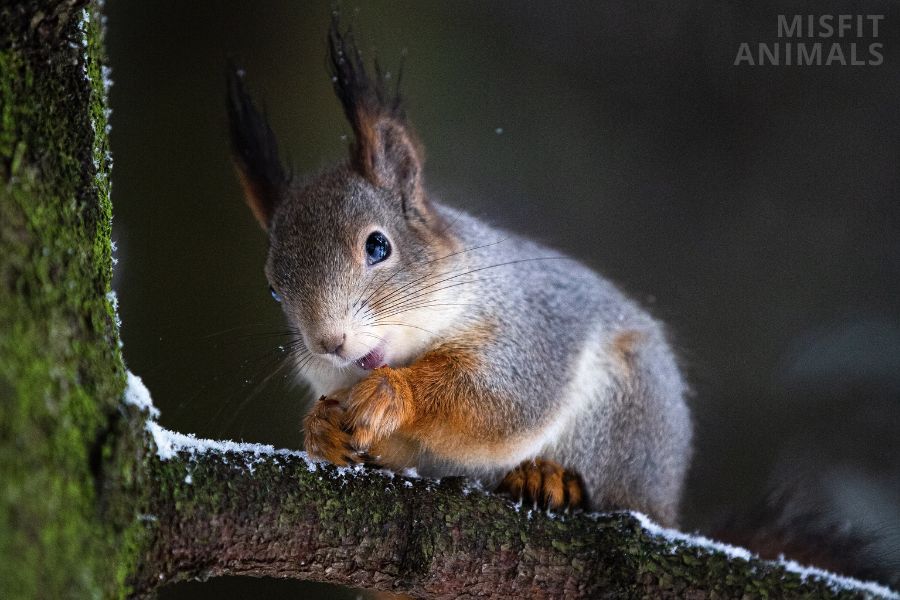 Squirrels are not nocturnal. Most squirrel species are diurnal, including tree and ground squirrels. This means they are active during the day and sleep at night. Flying squirrels are nocturnal.

Could the rustling sound in your attic or roof at night mean you have squirrels as houseguests?

Squirrels are active at different times a day, depending on species, diet, seasonality, and more.

In this article, we’ll explore diurnal and nocturnal squirrels, when squirrels are the most active, and where squirrels go at night.

When Are Squirrels Most Active?

Tree squirrels and ground squirrels are most active during the day, with some adjustments to their daily schedules based on the season. Flying squirrels are only active at night.

There are three main types of squirrels:

The activity pattern depends on the type of squirrel, the climate, and the season.

They have adapted to living in tree-lined suburbs and even within parks in busy cities.

Related: How & Where Do Squirrels Sleep?

Native to eastern North America, Eastern gray squirrels (Sciurus carolinensis) have been imported and have become one of the most common tree squirrels around the word.

These resilient squirrels have made themselves home in treelined suburbs and city parks, including New York City.[3]

When Are Eastern Gray Squirrels Active?

Like the gray squirrels, American Red squirrels (Tamiasciurus hudsonicus) have adapted to living in suburban and urban settings. They live across North America where there are interlocking coniferous tree canopies.[5]

When Are  American Red Squirrels Active?

Red squirrels are diurnal but occasionally exhibit nocturnal behavior. They are most active in the morning and afternoon in spring and summer. They are active all day in the fall (autumn) as they work to collect and store food for winter.

In winter, red squirrels are most active around midday.

Also known as the eastern fox squirrel or Bryant’s fox squirrel, the fox squirrel (Sciurus niger) is North America’s largest native tree squirrel. They are found in forests and tree canopies in the eastern United States and the southern prairie provinces of Canada.[6]

When Are Fox Squirrels Active?

Many ground squirrels live in natural settings near mountain ranges and in forests, but due to habitat loss, a few have adapted to suburban settings. An example is the thirteen-lined ground squirrel.

Thirteen-Lined ground squirrels are diurnal. They are most active at midday and on warm sunny days. They are inactive in winter since they hibernate until spring.[9]

This squirrel is named after the thirteen alternating dark brown and tan strips running from their head down to the base of the tail.

It has lost much of its prairie habitat but has found a replacement form of grasslands in golf courses, parks, pastures, and cemeteries.

Thirteen-lined ground squirrels (Spermophilus tridecemlineatus) can be found as far as Ohio in the east, Arizona in the west, Alberta in the north, and the Texas coast in the south.[8]

Flying squirrels are nocturnal animals, which is why they are rarely seen by people. They come out to feed at night, jumping from tree to tree using their skin flaps.

Are Flying Squirrels Active At Night?

According to the Connecticut Department of Energy and Environmental Protection, a common complaint about flying squirrels is when they have taken up residence in a home.

Flying squirrels can get into a home through ridge vents, eaves, and attic vents. Close these entry points and trim overhanging trees to discourage flying squirrels from nesting in your home.[10]

Southern flying squirrels are nocturnal. They are active all night during the summer months but in winter they venture out briefly shortly after dusk and just before dawn. When it is freezing, they can stay in their nest for a few days. [12]

They live in woodlands and forests in the eastern half of the United States, southeastern Canada, Mexico, and Honduras.

Nocturnal northern flying squirrels are active for about two hours an hour after sunset and again for an hour and a half to two hours before sunrise.[13]

They live in forests across Canada, south of the mountains of North Carolina, and west of Utah in the United States.

When Do Squirrels Come Out to Eat?

Diurnal tree squirrels and ground squirrels forage for food during the day. They adjust their feeding schedule according to the season. Nocturnal squirrels come out to eat at night.

Most diurnal tree squirrels, like the Eastern Gray Squirrel, venture out to forage for food right after sunrise. They then retreat to their nest and come out to forage again in the late afternoon to early evening in spring and summer.

In autumn, diurnal squirrels are active most of the day as they have to eat more than usual to gain winter weight and collect and sash food in preparation for winter.

Although diurnal tree squirrels do not hibernate, they spend more time in their nest or dens over winter. They will come out when it is warmest at midday to find food stores.

Diurnal ground squirrels also come out to eat during the day. Those that live in cold regions hibernate throughout winter.

Nocturnal flying squirrels come out to eat at night. In summer, they stay out all night. In winter, they will only leave their nests briefly to find hoarded food.

Where Do Squirrels Go at Night?

Before the sunsets, most diurnal tree and ground squirrels curl up for the night in their respective treetop and underground nests. And while they are falling asleep, the nocturnal flying squirrels are waking up and preparing to leave their nests for the night.

Tree squirrels sleep in their nests in the trees or cozy dens in tree cavities. Ground squirrels get their shut-eye in their underground burrows.

Flying squirrels also build nests in trees or make a home in the cavity of a tree, but they sleep there during the day and forage for food at night.

Do Squirrels Forage at Night?

Do Squirrels Sleep at Night?

Yes, squirrels sleep at night. As diurnal animals, they are active during the day, while they spend the majority of the night resting in their nest.

What Time Do Squirrels Wake Up in the Morning?

Squirrels wake up around dawn. Most squirrels become active about 30 minutes after the sun comes up. They will start foraging and do other squirrel activities throughout the day.

Can Squirrels See at Night?

No, squirrels can’t see at night. Nocturnal animals have developed a special lens, called a tapetum lucidum. Squirrels don’t have this lens and can’t process light in dim-light settings as well as nocturnal animals.