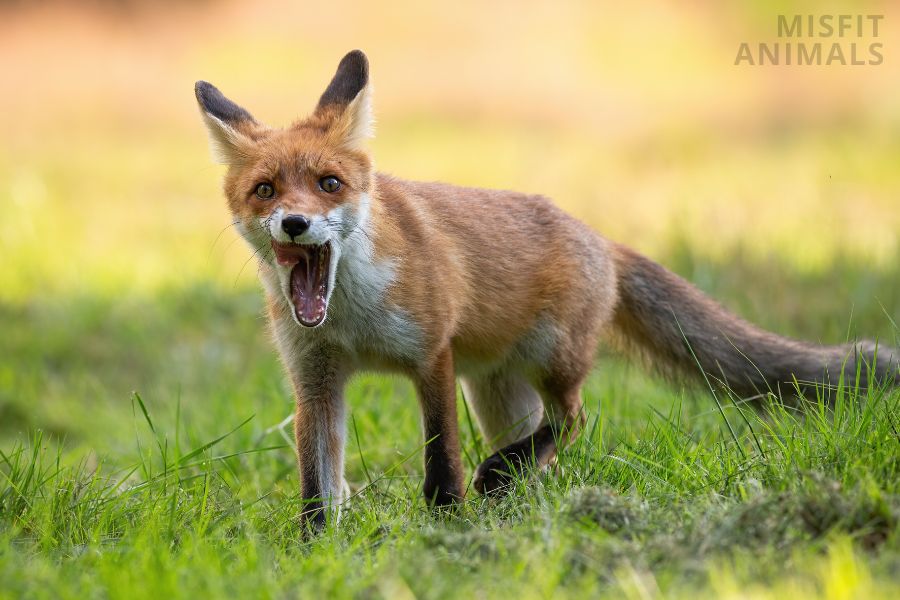 Foxes scream to attract a mate. They also scream when mating. Both male and female foxes scream, the males doing it most often. As nocturnal and crepuscular animals, they mate at night, which is why fox screaming is mostly heard at this time of day.

Hearing a fox scream at night can be terrifying. Many people describe this sound as a crying baby or a screaming woman.

In this article, you will learn why foxes scream, what other sounds foxes make, why they mainly scream at night, and more.

Foxes can make over 20 different sounds. They bark, scream, howl, squeak, rattle, and purr. Foxes use these sounds to communicate with each other or scare off predators.

Foxes have a high voice. Many people compare the sounds of a fox to a lady in distress because of this.

Their vocalizations are a mixture of cat and dog sounds.

One of the most common fox sounds is a hoarse or raspy bark. Foxes use this sound to pass on information:

Foxes can repeat this raspy barking every 3-10 seconds.

Another sound common to foxes is a high-pitched scream that they use in the mating season. Foxes also use this scream to scare predators away.

Baby foxes make around eight sounds. Their most common sound is crying, but they can also:

Fox cubs use sounds to communicate and attract attention, like adult foxes.

Why Do Foxes Scream?

Foxes scream to attract a mate during the mating season in winter and spring. They also scream when they feel threatened and want to scare the predator away. This is why you can hear foxes screaming all year round.

Foxes are related to dogs, belonging to the same family – the Canidae family. Like dogs, foxes also have a wide range of sounds through which they communicate.

Dogs usually make low and raspy vocalizations, while foxes make use of a much higher pitch. This is why most of the foxes’ sounds resemble a scream.

Many people describe this scream as terrifying, especially if they hear it at night. But foxes don’t scream to scare us; they do it to communicate and to scare away predators.

Male foxes mainly scream when they are looking for a mate. Their scream is similar to that of a woman. You will most often hear this sound in the winter and spring during foxes’ mating season.

Female foxes also scream during the mating season. Their screams are compared to a crying baby. The scream of female foxes is also called “the vixen call” or “vixen’s screams”.[4]

Outside the mating season, foxes scream to scare predators and drive them away from their territory.

If you hear a fox screaming and it’s not winter or spring, it’s most likely a warning scream because it feels threatened.

Do Foxes Make Noise at Night?

Yes, foxes do make noises at night as they are crepuscular-nocturnal animals.  This means they are active during dawn and night and sleep during the day.

If you live nearby a forest and hear screaming and other strange sounds at night, they probably come from a red fox.

Unlike gray foxes, red foxes make some noise at night. The noise they make sounds more like a woman’s scream than a dog’s bark.

As foxes are most active at night, they mainly communicate at this time. They communicate with members of their pack, their cubs, or family members, but also with unfamiliar foxes or predators.

During mating season, foxes are even more vocal than the rest of the year. Males are actively looking for partners in mating season, so they scream to find a mate.

What Other Noises Do Foxes Make?

Foxes use many ways of communication, including making sounds. Some sounds can scare people, especially if they are heard at night.

The most common sounds foxes make are:

Arctic foxes make up to 12 sounds, the most common being loud yowls and high-pitched sounds.

Other Animals That Scream

Foxes aren’t the only animals that make screaming and screeching sounds. Other animals that scream include the following:

Coyotes are part of the same family as foxes, dogs, and wolves. They usually scream to locate other members of their pack.

Coyotes are not nocturnal like foxes but they can change their circadian rhythm to avoid humans. This is why you will rarely hear coyotes howling and screaming at night.

Besides screaming, coyotes also bark and growl. They usually make these sounds to scare away predators or when they are in a fight.

Mountain lions are usually silent animals, but females scream when they are ready to mate. Their scream is often confused with that of a frightened woman, as with foxes.

The rest of the mountain lion’s sounds can be confused with a person whistling or a bird chirping.[5]

Bobcats are part of the feline family and have a high-pitched voice, like mountain lions. Their mating calls can easily be mistaken for wild animals fighting or someone being killed.

You will most often hear these sounds in the winter and spring when it is bobcat mating season.

Koala bears scream to alert the other members of their species that a predator is approaching. Their scream is not high like that of foxes. Koalas scream with a deep pitch.

Female koalas also scream during the mating season when the males harass them. They will scream louder and louder as the male approaches.[6]

Goats scream out of fear or excitement. They do not only scream as a reflex but also to inform the other members of their species that a predator or danger is approaching.

Squirrels use a variety of sounds to communicate, including screaming. They usually scream to alarm other squirrels that danger is approaching. Squirrel babies start making short screams at the age of four weeks.[7]

Marmots generally scream when they are scared. This sound is often compared to a human scream. The closer the threat is, the shorter the sound will be.

Besides screaming, the most common sound marmots make is chirping, which is similar to that of a bird.[8]

Foxes scream at night to attract a mate during mating season. The scream of males in heat is compared to that of a woman, and that of females to a baby’s cry.

Foxes also scream to scare predators when they feel threatened.

Since foxes are nocturnal animals, you will most often hear this sound at night.