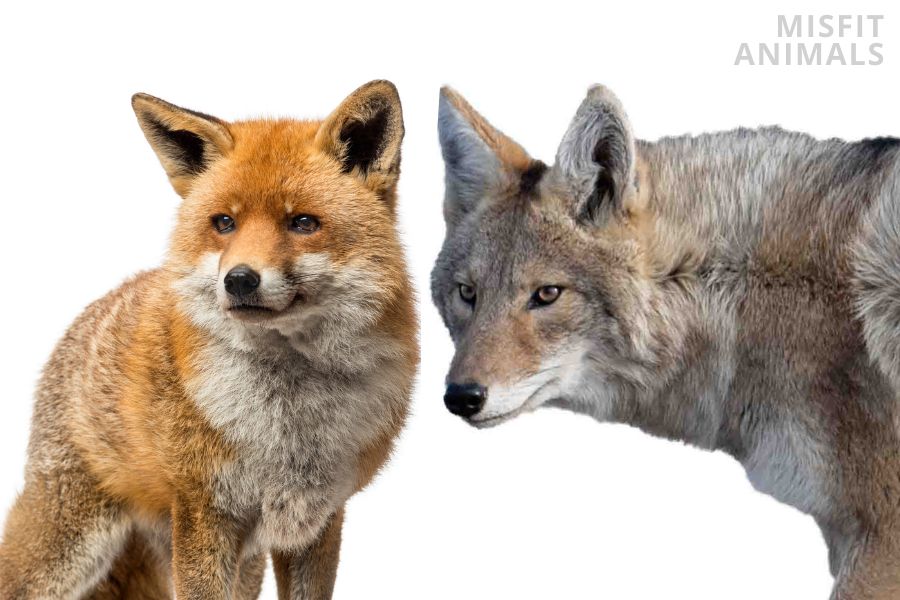 The main differences between foxes and coyotes are their size and physical features. Coyotes are almost twice the size of foxes and more closely resemble wolves. Both species are omnivores but coyotes favor meat.

Foxes and coyotes are related species as they belong to the same family of Canidae.

It can be hard to tell them apart as they have some similarities. But if you look closely, you will notice that there are key differences that make them easy to distinguish.

The main aspect that distinguishes foxes from coyotes is their size, foxes being two times smaller than coyotes. Another key difference is the color.

In this article, you will learn the differences between foxes and coyotes, what the similarities between them are, how a fight between them looks, and much more.

Fox vs. Coyote: An Overview

Foxes and coyotes are canids of the Canidae family. The main difference between these two species is the size of their body. Adult foxes weigh around 20-30 pounds, while coyotes weigh 50 pounds.

While body size is the main difference between the two, there are many more.

Foxes are crepuscular-nocturnal, while coyotes are usually diurnal. Some coyotes change their circadian rhythm, becoming crepuscular, to avoid humans.

Foxes and coyotes belong to the same family, Canidae, but they belong to different genera.

Looking past their main differences, they also share many traits:

Differences Between Foxes and Coyotes

The main feature that differentiates foxes from coyotes is their weight. Foxes weigh about 30 pounds body weight, and coyotes can weigh up to 50 pounds. Both species are of similar size but coyotes have longer and more muscular bodies.

Foxes and coyotes look similar, especially to an untrained eye. But they have certain physical traits that differentiate them.

The most obvious feature is their size. Adult coyotes are double the size of adult foxes. Other minor distinguishing features are the size of the ears, tail, and fur color.

Here are the main differences between foxes and coyotes:

Scientific Classification of Foxes vs. Coyotes

The Canidae family, which includes foxes, coyotes, dogs, and wolves, is a family of dog-like carnivores.

The members of this family are colloquially called dogs (canids) and constitute a clade.[1]

Foxes comprise six genera with 23 species. Of these species, only those of the genus Vulpes are considered true foxes. There are 12 true foxes.

Coyotes are a single species belonging to a single genus, Canis, along with domestic dogs and wolves.

The anatomy of foxes and coyotes is alike, given the fact that they are part of the same family. But they also have some fundamental differences that can help you tell them apart.

Coyotes and foxes are omnivores, but they have slightly different eating habits.

If coyotes and foxes share the same territory, they will compete for food. Because of this, coyotes hunt foxes to eliminate the competition.

Foxes are crepuscular-nocturnal animals that prefer to hunt between dusk and dawn.[5]

If the territory they live in is free of predators and has plenty of food, they can change their circadian rhythm. They will be active during the day instead, making them diurnal.

As for dens, they either dig their own, inherit one, or steal them. Foxes use their dens to store food, raise their young, and hide from predators.

They sleep during the day near the den.

Coyotes are found in North America, from eastern Alaska to New England and south into Mexico and Panama.

These canids are diurnal, as they carry out their activity during the day.

In populated areas, some coyotes have changed their circadian rhythm to avoid people, hunting at night.[6]

Coyotes dig burrows to raise their young and store food. Like foxes, they prefer to sleep outside the den in tall grass.

Similarities Between Foxes and Coyotes

The main similarities between foxes and coyotes are their eating habits and general appearance. Both are opportunistic omnivores, and they look similar, especially when they are babies.

If you look past the size difference, coyotes and foxes are very similar. Especially when they’re young.

Newborns of both species are born with fur, with their eyes and ears closed, and depend on their mother for protection and food.

Here are the main similarities between foxes and coyotes:

Foxes and coyotes are also similar in terms of the kits they give birth to.

Their babies are born with fur, with their ears and eyes closed, and depend on their mother for food and protection until they are ready to leave the nest.

Baby coyotes are similar in appearance to baby red foxes, including color.

Are Coyotes Stronger Than Foxes?

Yes, coyotes are stronger than foxes as they are more muscular and double the size. Coyotes sometimes kill foxes to eliminate competition for food.

Coyotes have more muscular and bigger bodies than foxes. Their legs are longer, and their bites are more powerful.

Coyotes definitely win in fights against foxes, unless the fox is lucky. Coyotes usually attack large animals like elk, deer, or moose, so foxes are easy kills for them.

It is said that coyotes are the greatest enemy of foxes. They will kill them to eliminate food competition and also eat them if they are hungry.

Can Coyotes Mate With Foxes?

No, coyotes and foxes can’t mate. Even though they are from the same family and are related, coyotes and foxes are part of different genera. They do not have the same amount of chromosomes to produce offspring. Even if you see a coyote mating with a fox, they will never be able to have cubs.