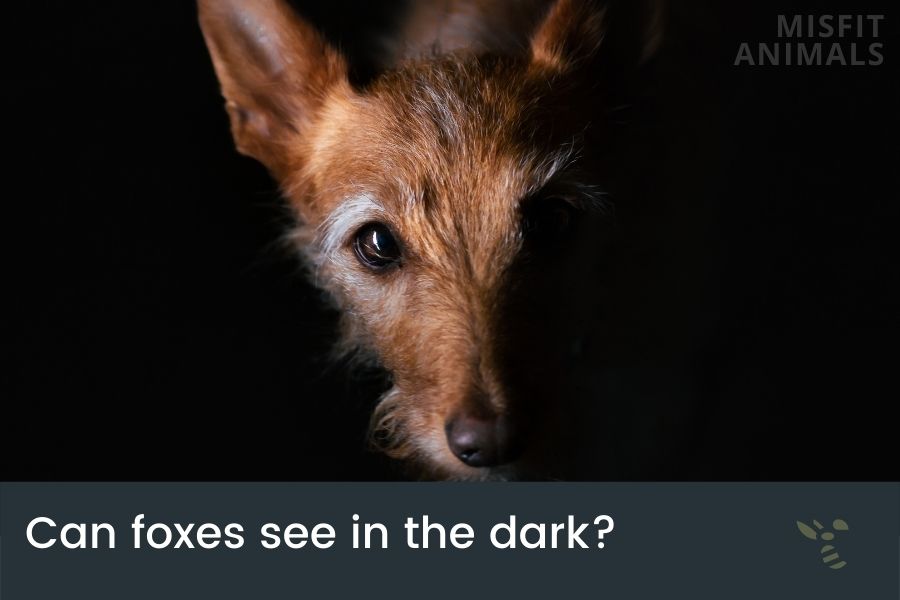 Foxes can see in the dark and have excellent night vision. They have a special membrane behind their retina called the tapetum lucidum. This reflects light back onto their retina, enhancing their vision in low-light circumstances.

This gives them excellent night vision to catch prey and avoid predators.

In this article, we’ll talk more about the nocturnal nature of foxes, as well as how their night vision works.

Can Foxes See in the Dark?

Yes, foxes can see very well in the dark, but they do need some light. They are great nighttime hunters, partly due to their ability to see when there’s practically no light present.

Foxes are nocturnal animals, meaning they are active during the nighttime. Their main activities, such as hunting, take place between sunset and sunrise.

Since being able to hunt efficiently can mean the difference between life and death for a predator like a fox.

It’s important to note, that no animal can see in the dark. A little light needs to be present, which will be enhanced by elements in their eyes.

How Far Can a Fox See in the Dark?

While it’s known that foxes have great night vision, it’s now known how far they can see. They have great eyesight in general, as good as cats.

This is expected to be a bit worse at night, but still much better than humans’ ability to see at night.

How Do Foxes See at Night?

Foxes can see in the dark because of their tapetum lucidum. The tapetum lucidum is a layer of tissue that sits behind the retina and reflects visible light back through it. This increases visual acuity two-fold.

In other words, the tapetum lucidum allows for visual pigments to absorb very low-intensity light twice.

Visual Acuity is the clarity or sharpness of vision. [1]

This means they can pick up on subtle movements during low illumination levels much better than other animals can.

The tapetum lucidum is a layer of tissue in the eye that reflects light onto the retina [2]. This way, foxes can absorb even more light than humans can with their photoreceptor rods.

Rod cells are photoreceptor cells that help to see in dim light. The more rod cells, the better night vision.

In addition to this awesome structure, foxes also use what call “visual pathways” when they are hunting or exploring at night.

These paths include information about depth perception as well as visual images from past experiences on how to navigate around obstacles.

When foxes’ eyes are exposed to light, it’s reflected back. This is why their eyes glow at night, much like dogs or wolves.

How Do Foxes Navigate at Night?

Foxes use a combination of different factors when navigating around at night:

As stated, foxes have great night vision, mostly due to the tapetum lucidum. Their eyes are exposed to more light since this reflective layer sends light particles back out through the eye.

Second, foxes have a great sense of smell. They can use this to guide them by referencing smells to those they already know.

Lastly, they also have great hearing. Foxes can use this to find prey or to avoid predators.

Foxes are primarily nocturnal animals. This means that their activity level is higher at nighttime than it is in the daytime. They hunt, mate, and mark their territories at night.

However, just because foxes aren’t active does not mean that they sleep all of the time either.

The majority of a fox’s nighttime activities include:

While foxes are considered nocturnal, it’s not uncommon to see foxes roaming around during the day as well.

Do Foxes Have Good Eyesight?

Foxes have great eyesight, much like cats. Foxes’ eyes are small slits, making them more cat-like than dog-like. This also applies to their field of vision, which is 260-degrees.

A small field of vision provides predators the ability to focus better on moving objects. This is seen in wolves, lions, and similar predators. These animals will have eyes facing frontwards.

A wide field of vision is often seen in prey animals, such as birds or deer. They need a wider vision to easily spot predators that are sneaking up to them.

Do Foxes Come Out During the Day?

While foxes are considered mainly as nocturnal animals, they also exhibit diurnal or crepuscular habits. This means that they are active during the day, or during dusk and dawn.

However, it is not unusual to see foxes wandering about during the day as well.

Foxes are very opportunistic hunters and eat what is readily or easily available for them in their territory. If their food source (small birds, rodents, smaller animals) are diurnal or active during the day, the foxes may hunt them during the day.

There are also times that a family of foxes and their new kits would be seen traveling during the day when they would transfer or look for a new den.

Foxes are wary of human interaction and will most likely leave you alone if you meet one during the day. You must, however, always keep your guard up and observe the behavior of the fox that’s active during the day as they may be rabid.

Whether foxes like the dark is unknown, but they prefer to roam around, hunt, and conduct other activities during the night. This is simply due to their nocturnal behavior.

Due to their great sense of smell, hearing, and ability to see well in the dark, they’re very effective nighttime predators. As most of their prey is either sleeping or inactive at night, this makes hunting easier.

In the case of urban foxes, they mostly come out at night to avoid humans. Most urban neighborhoods become quiet at night when people sleep. Hence, there’ll be fewer people around at night.

Humans are a natural enemy of the fox, hence foxes have learned that it’s best to avoid them.

Foxes have great night vision, one of the best within the Canidae family (wolves, dogs, coyotes, jackals, and foxes). They have a reflective layer in their eyes, called the tapetum lucidum.

This reflective layer sens light back out through their eyes, letting light pigments absorb light twice, instead of just once light humans eyes.

They mainly roam about at night looking for food, mates, predators, or dens where they rest or sleep.

Do Foxes Have Night Vision?

Yes, foxes have great night vision. They’re typically nocturnal, meaning they venture out at night. Their night vision helps them hunt better at night. This is due to the tapetum lucidum, as a reflective layer in their eyes. This is also what makes their eyes glow at night.

Can Foxes See in the Day?

Yes, foxes can see in the day. Just because they have great night vision, doesn’t mean they can’t see during the day. They’re great at tracking pray during the day. The structure of the cells in their eyes helps them regulate the entry of bright light.