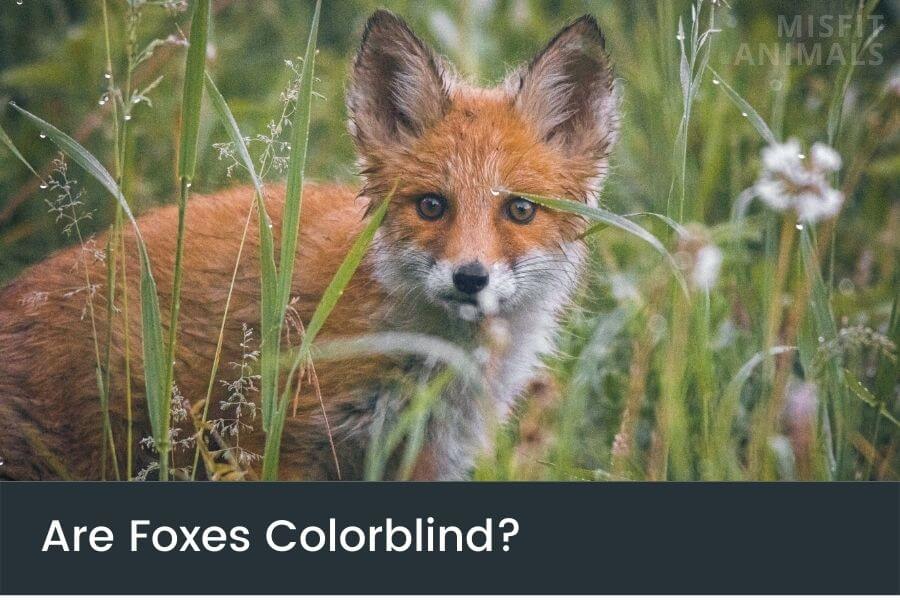 Foxes are red-green color blind, meaning they only see blue and yellow colors. They’re not completely color blind but have dichromatic vision.

Foxes don’t see all colors. They base their colors on blue and yellow, meaning they can’t see other shades or colors other than that.

This is different than human color vision, which is trichromatic.

In this article, we’ll discuss how foxes see colors, how color vision works, as well as other facts about foxes’ vision.

Yes, foxes can see color, but they only have two-color vision (called dichromatic vision). This means the base color combinations on only two colors, blue and yellow.

As a result, foxes are technically colorblind: red-green color blind. They are only to distinguish between blue and yellow colors, but reds and greens look the same to them.

This same color-blindness is also seen in wolves and dogs. [1]

Foxes are known to be colorblind, meaning they are unable to distinguish between certain colors.

This is because of how colors and color vision works.

As stated, foxes are dichromatic and can see two colors: blue and yellow. Their eyes are only capable of absorbing light within certain wavelengths.

Colors come in the form of light. Different species can absorb and see different colors, depending on their photoreceptors in the retina, specifically the cone cells. These cells are responsible for detecting colors.

Color-blindness occurs when these light-sensitive cells fail to respond appropriately to different wavelengths of light.

Colors are important, as they allow individuals to easily distinguish between objects [4]. As a result of fewer cone cells, as well as only two types of color photoreceptors, they can’t do this very well.

Most animals have either dichromatic or trichromatic vision, meaning they see color combinations based on either two or three colors.

Different animals also base their colors on different colors, such as foxes who see blue and yellow, instead of green or red.

Some animals, such as bees, have cone cells designated for detecting UV light. They can’t see red, but can instead see UV light, which is invisible to humans.

When an animal has dichromatic vision, it means that they are only able to see two colors, in this instance blue and yellow. The reason for this is because they have two types of cones cells:

Most mammals, like squirrels, bats, tigers, and dogs are considered to be dichromatic. Primates are typically trichromatic. Frogs are also dichromatic.

What Colors Can Foxes See?

Foxes can see blue and yellow, as well as shades of these colors.

Foxes can’t see colors outside of the blue and yellow spectrum, meaning they can’t see red, green, or ultraviolet light. These are either seen as grey, or they’re seen as shades of blue and yellow.

How Do Foxes See the World?

Foxes have great night vision, but their vision during the day isn’t very remarkable. Their eyes are built much like cats, with a vertical pupil, instead of a round pupil like wolves, or humans.

They’re short-sighted, meaning anything from far away is very blurry. This is also called myopic vision, where short-distance visual acuity (sharpness) is great.

Foxes use this short-ranged sight to better maneuver when running at high speeds, or when they’re chasing now prey.

Their eyes are also narrow, and they have a wide field of view. This allows them to easily spot any movement with their peripheral vision.

This allows foxes to see very well when there’s almost no light, or during night time.

Related: Can foxes see in the dark?

Do Foxes Have Good Eyesight?

The eyesight of foxes has been well-adapted to their ever-changing habits. They can see well in the dark and in bright lights. Their vision is well suited for pursuit, as their short-range visual acuity is great.

While they do have good eyesight, it has evolved to work better with moving targets. Their vertically-slit eyes are believed to be more suited to prey moving horizontally.

As mentioned, they also have very good eyesight during the nighttime, though not as good as other animals (such as the owl, which has the best night vision among all animals).

What Color Are Foxes’ Eyes?

Most foxes have yellow eyes, as this is a dominant gene. This is due to the amount of melatonin in their eyes. Foxes may also have light blue, green, brown, or grey tones.

The kits are believed to have a bluish color in their eyes while they are still young and developing. However, they turn to a different color like brown, yellow, or reddish-brown when they mature.

Foxes are colorblind, but they can still see blue and yellow colors. Hence, they’re red-green colorblind, just like many humans are.

Foxes have dichromatic vision, meaning they see colors based on two cone cells (the cells responsible for detecting light): one type for blue light, and one type for yellow light.

They can’t see red, green, or ultraviolet light, as these may occur as shades of grey, or shades of blue and yellow.

No, foxes can’t see red light. They don’t have photoreceptor cells that can detect light with this wavelength, hence it probably appears as a shade of grey.

Yes, foxes can see blue light. Their eyes have photoreceptor cells dedicated to light within the blue spectrum. They can also see a yellow light, but no other colors.