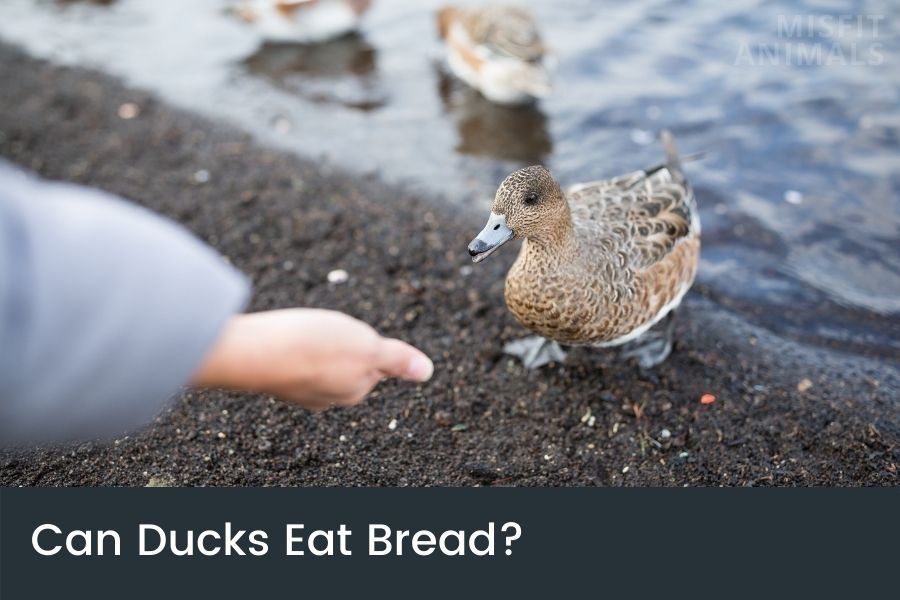 Bread is very unhealthy for ducks. It’s full of empty calories, as it provides no nutritional value. It can cause health problems for ducks and negatively impact their natural behavior.

Feeding ducks is a popular activity, both among older and younger people.

They are very common in urban areas and can often be seen at duck ponds and parks.

However, there are certain foods that are unhealthy for ducks, and bread is one of them.

Let’s take a closer look at why bread is bad for ducks and some of the alternatives you can use to feed them instead.

Yes, ducks can eat bread, but it’s not healthy for them. Ducks need a varied, nutritional diet, which they don’t achieve by eating bread.

Bread is essentially the same as junk food for ducks.

It’s high in calories, high in carbohydrates, and low in nutrients, vitamins, and minerals. Ducks need certain vitamins and minerals to survive, which is exactly why bread is bad for them.

When ducks are fed bread, they’ll fill up their stomachs with it. This results in them not being able to eat the healthy and varied diet they need to survive.

Feeding ducks bread is the equivalent of humans living off of candy and junk food.

It can also contain yeast and fermentable carbohydrates, which can cause impacts to the stomach and intestinal flora of birds.

This can lead to a nutritional deficiency and can predispose animals who eat bread to other health conditions such as colic or canker.

Is Bread Bad for Ducks?

Yes, bread is very bad for ducks. As it doesn’t provide them with the nutrients they need, it can lead to health problems.

Bread can work as a treat to ducks, served in moderation. Unfortunately, it’s the go-to food that people feed to ducks.

Instead of bread, you should feed ducks healthy foods such as grapes, oats, seeds, duck pellets, and similar.

Why You Shouldn’t Feed Ducks Bread

It can be so satisfying to watch ducks waddle over to you for a snack.

However, feeding ducks bread can lead to a series of issues, including:

Ducks will eat almost anything they can find. Hence, they won’t hesitate if you feed them bread.

Bread Can Lead To Duckling Malnutrition

Baby ducks are called ducklings, and ducklings need a very specific and varied diet at the beginning of their life. Feeding them bread can be detrimental.[1]

Feeding ducks’ bread can lead to malnutrition in ducklings and can ultimately result in a poor quality of life.

Bread Can Lead To Overcrowding

Bread can lead to overcrowding. If there’s easy access to food, ducks will come. It can also result in more waterfowl laying eggs in the area, resulting in even more overcrowding.

In return, overcrowding can lead to difficulty in finding healthy foods and increase territorial aggression. [2]

Pollution can be caused by a number of different factors, one of them is feeding ducks bread.

When too much bread is offered to ducks, they won’t be able to eat it all, resulting in leftover, rotting bread. This can cause an increase in bacteria that can lead to diseases that will impact both humans and animals.

Diseases and pests can spread from the bread. This is primarily due to leftover bread not being eaten by the ducks.

Bacteria can grow on stale pieces of bread. This can cause diarrhea in ducks and make them very sick.[3]

A type of fungus can grow along with the bacteria, causing a disease called aspergillosis. Symptoms can include weight loss, trouble breathing, and lethargy. This is fatal to ducks.

Another type of fungus can also grow on bread and food that can lead to botulism. Symptoms can include lack of appetite, paralysis, and respiratory problems that can cause the duck to suffocate.[4]

Feeding ducks bread can cause a loss of natural behavior. This can happen in two scenarios:

What to Feed Ducks Instead of Bread

Instead of feeding ducks bread, you should feed them oats, rides, fruits, vegetables, or insects such as mealworms.

As stated, bread makes for a good treat. Unfortunately, this is usually what people feed to ducks.

Instead of bread, try feeding them something healthy, such as grains, fruits, vegetables, or insects.

These foods are all part of a duck’s natural diet, and they’re all full of nutrients that ducks need to survive.

Related: What to feed ducks? (what can they eat?)

As much as we would love for ducks to be able to live off bread, there are better alternatives.

Bread can have a negative impact on the digestive system of ducks and can even cause health issues, such as mold growing in their crops.

Instead of bread, feed them wheat, barley, or other similar grains.

Wheat is an important part of a duck’s diet because it provides them with the nutrients that they need to survive. Barley can also be fed to ducks as a substitute for bread.

Grains are very rich in fiber, which is why they’re great for ducks. Just make sure not to overfeed them, as grains are rich in calories as well.

Oats can be a great alternative to bread, especially when feeding domesticated ducks.

A simple half-and-half mixture of oats and water can be fed to ducks on a daily basis, but can also serve as a treat for more special occasions.

Rice can be fed to ducks instead of bread. Bread can cause obesity, malnutrition, and deformities in ducks, so it can be harmful to feed them this food.

Rice is a great food for ducks, as it contains fewer empty calories than bread. As with grains, make sure not to overfeed ducks with rice, as too much of anything can cause harm.

Fruits and vegetables contain plenty of vitamins and minerals. 80% of wild ducks’ diet consists of vegetation, which might give you an idea of why it’s good for them.

Some of the fruits to feed ducks are:

When you feed ducks fruits or vegetables, make sure they’re not too big. As ducks don’t chew their food, but swallow it whole, it can be a choking hazard.

Worms can make a nutritious alternative to bread for ducks. Worms are part of ducks’ natural diet, as they provide protein.

You can either grow these yourself, order them from a multitude of retailers, or buy them in a store.

Bread is bad for ducks if they have too much. Bread has high levels of carbohydrates and calories, while not providing any necessary nutrients. Hence, they’re not good for ducks.

If you want to feed ducks, feed them something like oats, rice, fruits, vegetables, or insects instead.

Is It Ok To Feed Bread to Ducks?

Ducks can definitely eat bread, but it can damage their digestive system and lead to malnutrition if they have too much.

Yes, bread can indeed kill ducks. They don’t die instantaneously unless they choke on it, but they can die due to malnutrition, diseases, overcrowded areas, or loss of natural behavior.

Is Fresh Bread Bad for Ducks?

Bread, either fresh or stale, can cause health problems for ducks. Instead of bread, feed them grapes (cut in half), oats, or insects.