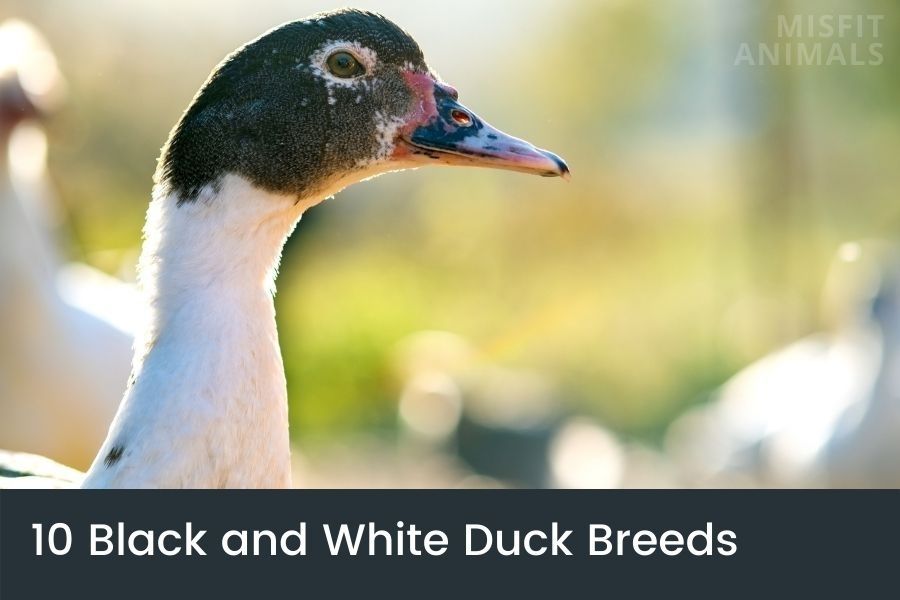 Some of the most common black and white duck breeds include Magpie, Muscovy, Crested, Tufted, and more.

Duck breeds come in all shapes and sizes, each with its own unique personality and quirks.

From the regal Muscovy to the curious Mandarin, ducks are a favorite among bird enthusiasts for their engaging personalities and beautiful plumage.

Whether you’re a bird watcher, bird enthusiast, or just enjoy watching ducks at the park, you’ll want to check out this list of 10 black and white duck breeds.

From the Rouen duck to the East Indie duck, these unique ducks are sure to catch your eye.

The Magpie duck is a British domestic duck breed. It has distinctive black and white markings and is known for laying large eggs.

The black wing tips are visible in flight. The black shoulder patches are also apparent in flight.

Magpie Ducks have short tails, which makes it easy to identify when flying overhead. They have a black and yellow beak, brown eyes, orange legs, black and white head, black laces on the black feathers, black breast, and black rump.[1]

Ancona is a lesser-known breed of ducks, which is not recognized or listed by the American Poultry Association, the Entente Européenne d’Aviculture et de Cuniculture, or the Poultry Club of Great Britain.

Anconas are black and white ducks that have a black head, tail, and wings with a white body. Their plumage is generally black with a white belly and a black spot at the back of their heads. They also have orange feet and legs.

The Ancona is believed to originate from England and was later introduced to the United States, though there’s still some debate about that.

The Muscovy duck is very common in America. It’s native to South America and is generally very large.

Muscovy duck is a black and white duck breed that originates from South America. Muscovy Ducks are either white or black with black feathers on their wings, black tail feathers which they can hide between for perfect camouflage, a red/orange bill, and black legs.

Females and males can be told apart by their tail feathers, whereas females are more grey in color.

Muscovy ducks are one of the largest breeds in the waterfowl category.  They are very strong and heavy-bodied birds that don’t like to fly much but will if necessary or when they feel threatened.

Even though they’re from tropical climates, they thrive in cold weather as well. They can live in temperatures as low as 10 °F (-10 °C).

The crested duck is a domesticated duck breed, native to the East Indies and brought to Europe.

The crested duck is known for the deformation on top of its head, which is caused by genetic mutation because it’s heterozygous.

The black feathers on the crest of this black and white duck breed are evident as soon as it is born.

A version was bred by John Hall and Roy Sutcliffe in the United Kingdom, called the Crested Miniature, as the head deformation is very popular in Europe.

The Tufted duck is a smaller duck. They’re diving ducks, meaning they dive for food.

The Tufted Duck is black and white waterfowl of the Anatidae family. They have black heads, and are black all the way from the head to their back, except for a small spot on the back of their head, with white parts throughout their body.

Only the males are black, whereas the females are brown.

The population of tufted ducks is around 1 million.

The greater scaup (also known as the scaup in Europe, or bluebill in North America), is a medium-sized duck and is found in both North America, Europe, and Asia.

The greater scaup (Aythya marila) is a black and white duck breed that is native to the northern hemisphere.

Greater scaups can be identified by their black heads and blue bills. Males have white bodies, with black dotted wings. The females have brown bodies.

They’re migratory birds, spending their summers breeding in Alaska, Canada, Siberia, and other Northern parts of Europe. In the winter, they spend their time in Southern parts of North America, Europe, and Japan.

Greater scaups are larger than their counterparts, the Lesser Scaup.

The Bufflehead duck is a black and white duck breed that originates from North America. It’s part of the “goldeneyes” genus of Bucephala.

Buffleheads are not domesticated ducks so they cannot be kept as pets. They tend to fly in small flocks or pairs during the day but can often be seen in larger flocks during the fall and winter months.

The hooded merganser is the last living merganser in the genus Lophodytes (crested diving ducks). Mergansers can lower and raise their crest.

The hooded merganser is typically considered a beautiful bird, with magnificent crests on both males and females, with a mix of colors and patterns.

It is a black and white waterfowl found worldwide, but are most prominent in North America, with year-round nesting sites from the southern Canada-U.S. border down to the Gulf Coast around Mississippi.

This duck gets its name from its hood-like crest, which is black for males, and brown for females.

Males may also have black beaks, black wings with white stripes, and brown feathers here and there.

Females are all-brown, ranging from light brown to dark brown.

The wood duck, also known as the Carolina duck, is a perching duck. It’s one of the most colorful waterfowl in North America.

Wood ducks are black and white duck breeds that are easily identified by their distinctive plumage. The “wood” part of the name refers to these ducks’ ability to seek safety in wooded areas, which is where they prefer to nest.

Many species of wood ducks are native to eastern North America, but due to hunting and habitat loss, many have become threatened or even extinct.

The common Goldeneye, also known as goldeneye, is a sea duck from Ancient Greek. They’re aggressive and territorial.

The common Goldeneye duck has:

It’s only the male common goldeneye which is black. Females are brown.

This is a diving duck, meaning it feeds on vegetation and insects found in the water of lakes or ponds, which it retrieves by diving into the water.

The Agreement on the Conservation of African-Eurasian Migratory Waterbirds applies to the goldeneye.[4]

What Breed of Duck Is Black and White?

There are many breeds of black and white ducks, the most common including the Magpie duck, Muscovy duck, and Crested duck.

Ducks come from all over the world, from different habitats. Hence, some have developed black feathers for better survival.

This has resulted in a large amount of black and white duck breeds.

They’re all characterized by having a mix of black and white feathers, though they still stand out amongst each other.