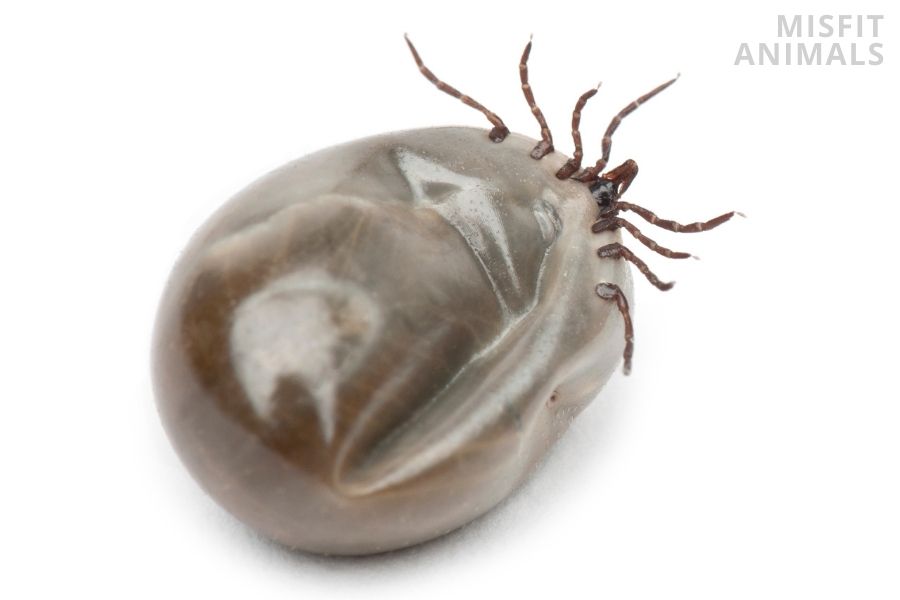 White ticks are ticks that have fed on blood to the point of becoming engorged. Unfed ticks are dark in color, but their color changes as they feed and their body expands. Engorged ticks can be white, green, yellow, or pink depending on the species and the degree of engorgement.

Most people know ticks as dark brown or black. When they come across a white tick, they may think it’s a special species.

Certain tick species turn white when they are full of blood, such as deer ticks or black-legged ticks.

These ticks are among the most dangerous because they can transmit diseases to dogs, such as Lyme disease and babesiosis.

If a tick infected with microorganisms that cause diseases turns white, it most likely transmits these pathogens to your dog.

In this article, you will learn what a white tick is, if it is dangerous, how to remove it, and more.

What Is a White Tick?

White ticks are engorged ticks. The engorgement causes some species of ticks to appear white. Ticks’ abdomen is like a sack that stretches to hold blood. The tick lightens in color as the sack fills up with blood.

A tick needs to feed on blood until it becomes engorged to move on to the next evolutionary stage or to lay eggs.

Only adult female ticks from the Ixodes species turn white (deer ticks or black-legged ticks). Given that it’s about perception, other species of ticks can also be perceived as white.

It takes at least three days after attachment for a tick to become engorged and white. Ticks feed for an average of 4-7 days to become engorged[1], but there are cases in which they stay attached to the host’s skin for up to ten days[2].

In the feeding process, their abdomen expands so much that they turn silvery or whitish.

When ticks turn white, they have usually finished feeding and detach from the host to look for a place to lay their eggs.

What Colors Are Ticks?

Engorged ticks can turn pink, matching the color of your dog’s skin. These ticks are often confused with skin lumps.

Look for legs and movement to differentiate between a skin lump and a tick.

White ticks are globular and can reach one-quarter inch to two-thirds of an inch in diameter.[3]

Engorged white ticks of the Ixodes species have the following appearance:

Partially engorged white ticks will look wrinkled (like a raisin) and have about one-eighth inch in diameter.

Why Do Ticks Turn White?

Some ticks species turn white when they become engorged. This results in their abdomen expanding, lessening the coloration of their pigment (as a balloon that loses color when you blow it up).

All adult ticks have a shield-like structure (scutum) on their back.

This small shield in females allows them to swell with blood as their abdomen is elastic. The abdomen expands as the tick feeds, resulting in a silvery-white color, sometimes with shades of green.

Ticks most associated with the white color are those of the Ixodes species, commonly known as deer ticks.

Are White Ticks Dangerous to Dogs?

White ticks are considered dangerous to dogs. This is because they have had enough time to transmit diseases. Deer ticks can transmit Lyme disease, babesiosis, and anaplasmosis to dogs, but only after they become engorged.

Ticks are vectors for many pathogens that can cause severe illness to pets. These diseases are called tick-borne diseases.

Deer ticks (Ixodes scapularis) can be vectors for the following microorganisms:

The transmission time of these pathogens is measured in “time since attachment”, which varies depending on the disease:

Some studies show that a tick can transmit Lyme disease within 16 hours if the bacterium is in the tick’s salivary glands at the time of attachment.[4]

It is possible for white ticks to transmit all these pathogens to your dog if they are infected.

A white tick has usually been feeding on your dog for at least 3-4 days if you find one. But there are some cases in which the feeding of ticks is interrupted, and they detach. These ticks then search for another host to complete their feeding cycle.[5] This pattern of interrupted feeding makes white ticks transmit pathogens faster for some diseases.

How to Remove White Ticks

It is easy to remove an engorged white tick. Pull the tick out with a pair of tweezers or special tick tools. Make sure you wear gloves when you do this.

There are many methods to remove ticks from dogs. White engorged ticks are easier to remove because they are bigger, meaning you have a larger grip base.

Here’s how to remove white ticks:

What not to use on an engorged white tick:

These substances or methods can make an engorged white tick spill its gut content into your dog’s bloodstream. In other words, by traumatizing a tick, you can make it infect your dog with diseases.

How Do You Get Rid of White Ticks on Dogs?

Get rid of white ticks on your dog by applying or administering antiparasitic products. You should also check your pet for ticks after each walk. This way, you will find attached ticks before they become engorged.

There are many ways you can prevent white ticks on dogs:

It is recommended to search for ticks on your dog on a daily basis or every time you return from a walk. Even if it has antiparasitic substances applied.

Check your dog for ticks from head to tail and insist in the following areas:

This way, you ensure that a tick that has just climbed onto your dog won’t have time to become white and engorged.

Can Ticks Be White?

Yes. Ticks from the Ixodes species can turn white when they become engorged. Ticks’ initial color is dark or light brown, but they turn white or silver as their abdomen stretches when they feed.

Are All Engorged Ticks White?

No. Usually, only deer ticks turn white or silver-green when engorged. Other species can become darker, yellow, gray, or pink.