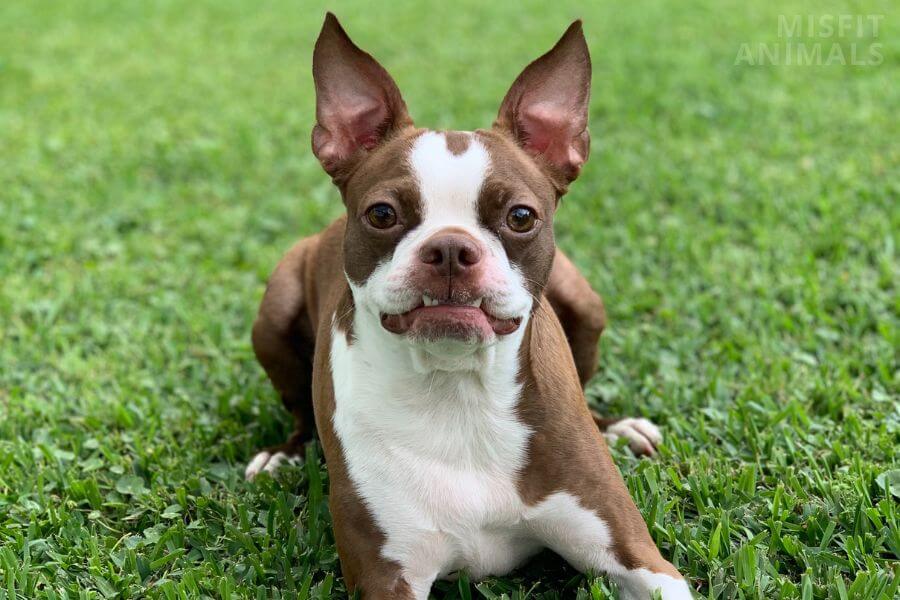 The red Boston Terrier is not a separate breed but standard Boston Terriers with a liver-like color. The cause of the coloration lies in their genes, inherited by their parents.

If you own one, you may be wondering what’s causing this strange coloration, or if they can compete in the competitions.

This article explores the specific characteristics of red Boston Terriers and if they meet the breed standards.

You will also learn why they exhibit red coats and how common they are.

Red Boston Terriers have the characteristic of Boston Terriers, with the exception that their hair is red. Their true color is not red though but looks more like a liver color. This Color is determined by a melanin type responsible for red to yellow collaboration in dogs.

Red Boston Terriers are single-coated. Their hair is short and shiny, lined close to their body, resulting in low amounts of shedding and required grooming.

Even though they don’t shed much, red Boston Terriers are not hypoallergenic.

No dogs are 100% hypoallergenic but some shed more than others.

Why Is My Boston Terrier Red?

The coat coloring of Boston Terriers is determined by a pigment called melanin.

There are many types of melanin. Of these, eumelanin and pheomelanin are the ones that affect dogs’ hair color.

The white markings on Red Boston Terriers are the result of a lack of melanin as well. In these portions, neither eumelanin nor pheomelanin is produced.

What Is the Nose Color of A Red Boston Terrier?

Red Boston Terriers have brown noses. Even though the brown color of their nose is similar to their red coat color, their noses are categorized as red.

Pheomelanin, the pigment responsible for the red color in dogs, influences only the coat coloring. Not the nose color.

The color of the nose and eyes is only affected by eumelanin. As eumelanin determines black and brown colors, their noses can only be black or brown. Red-nosed Boston Terriers do not exist, but some brown colors can be mistaken for red, causing confusion.

Some Boston Terriers have pink noses. This is due to a lack of eumelanin in the nose. This phenomenon usually occurs in albino dogs that also have pink eyes.

The following white markings also have to be present to meet the breed standard:

Does the Red Color Influence the Health Of Boston Terriers?

There is a popular misconception that red-haired dogs are prone to more health issues. The origins of this myth come from a condition called “Red Coat Syndrome”.[3]

The red coat syndrome is actually a separate condition that causes the hair of dogs and cats to develop a red hue. The causes of this syndrome are linked to their diet and the effect is temporary. There is no correlation between the red-coat syndrome and the base color of Boston Terriers.

Boston Terriers have a predisposition to the following issues:

Red Boston Terriers have prominent eyes. This leads to irritation and redness.

The eye disorders red Boston Terriers have a predisposition for are listed in this table.

Red Boston Terriers have a predisposition for congenital deafness. This is a recessive disease, which means both parents need to pass on the gene for the puppy to be deaf.

Congenital deafness is a condition some red Boston Terrier puppies are born with. Their hearing is impaired forever because it has no remedy, not even surgery.

This health condition affects more than 100 breeds[9] and is often correlated with a lack of pigmentation.

The BAER test is recommended to detect deafness in dogs.

Patellar luxation, in popular terms, is when the knee cap pops out of place. This is a common condition in small breeds. Boston terriers have a high risk of experiencing patellar luxation.[10]

The symptoms of patellar luxation can be missed by owners, especially in their primary phases. A patella evaluation is recommended to avoid further complications.

Boston Terriers can experience brachycephalic obstructive airway syndrome[11]. This is a condition caused by the shape of Boston Terriers’ skulls. They have shortened noses and upper jaws.

The main symptom of brachycephalic obstructive airway syndrome is noisy breathing. Some red Boston Terriers can even avoid physical exercise because they can’t breathe properly.

Some of these issues are treated with surgery. Still, surgery is not recommended if the symptoms are mild.

The gene for the color red is recessive, meaning both parents need to pass on the gene.

Offspring needs two allenes of the same gene in order to be red. If they have genes for another color, the genes for red dominate them. This result in a red Boston Terrier, even if the offspring carries other color genes.

How Much Is a Red Boston Terrier?

When buying a red Boston Terrier puppy make sure the breeder doesn’t overprice it. Many breeders demans a higher price claiming it’s because of the rarity of the color.

The price of red Boston Terriers also varies according to the quality of their parents. If the parents are from champion families, the puppies are more expensive.

In other areas, red Boston Terriers are bred on purpose, making them easily available.