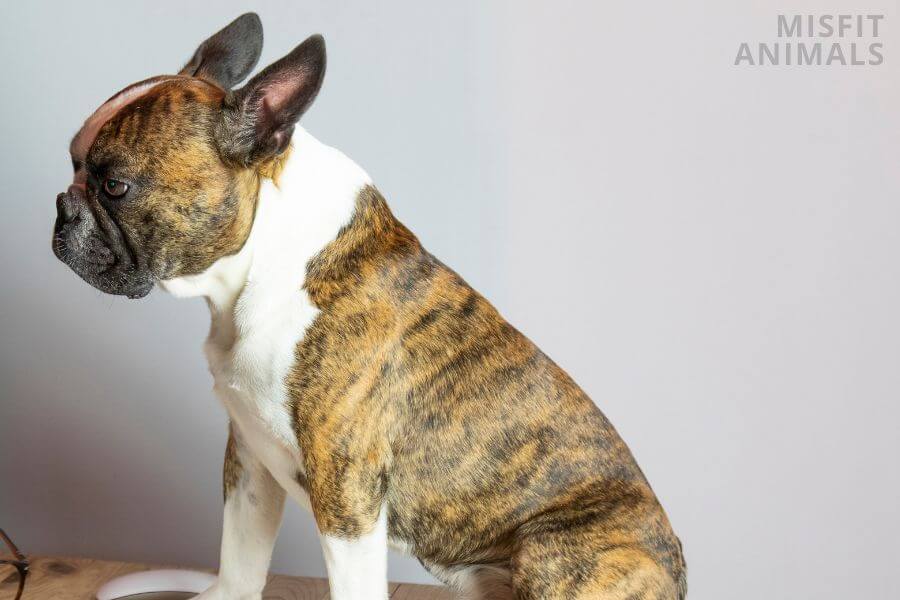 Boston Terriers come in many colors, but they can also have different patterns.

One of these is the brindle pattern.

Want to know if your Boston Terrier is brindle?

This article explores the different types of brindle Boston Terriers and provides information about their appearance.

It also offers details about which brindle patterns are accepted in competitions and why.

What Does Brindle Mean?

Brindle is a color pattern seen in dogs, cats, cattle, guinea pigs, and horses. It is characterized by dark stripes, similar to tiger stripes. The difference between a tiger’s stripes and the brindle pattern is tiger stripes are darker.

Brindle is a pattern, not a color. The brindle pattern manifests itself in different ways, either thick or narrow stripes.

Some dogs can seem all black, even if they are brindled. This is because of a type of melanin, called eumelanin, is present in high amounts on a dog’s coat. Some owners don’t even notice their dog is not black because of this.[1]

Other dogs have narrow stripes, making them almost invisible. This usually happens when the color of the stripes is similar to their base color.

Brindle Boston Terriers have unique patterns because the genetic variation is high. Two dogs can’t have the same pattern.

Why Are Some Boston Terriers Brindle?

Some Boston Terriers are brindle because of a recessive gene in their DNA. Their color gene combination determines where the stripes are located and how intense they are. The brindle pattern gene causes one type of melanin to create dark stripes.[2]

Brindle is a coat pattern formed by two types of melanin. These types are eumelanin and pheomelanin. Eumelanin is responsible for and black hairs, while pheomelanin determines hair color ranging from yellow to red.

The mix of these melanin types causes the brindle pattern.

Yes, the American Kennel Club accepts brindle Boston Terriers[3]. Not all types of brindle rise up to their standard. If Boston Terriers lack white markings, they are excluded from competitions.

Here are the brindles accepted by the AKC:

Brindle dogs usually display black stripes on a red base. The red base is caused by pheomelanin, while the stripes are caused by eumelanin. Stripes are either black or brown as a result of the eumelanin.

Other genes can interact with the genes that cause these stripes, resulting in diluted, broken, or patchy stripes.

There are four types of Brindle Boston Terriers:

This Red Brindle Boston Terrier is the closest to the original brindle. This color combination is not accepted in competitions.

The red base of a Boston Terrier differs depending on their gene bouquet, as the pheomelanin that causes red can interact with a dilution gene.

The red base color of Boston terriers varies, as follows:

Boston Terriers with blue coats actually have gray coats. The blue is a light shade of gray called ‘blue’. It is the result of a dilution gene.

This gene interacts with eumelanin, which causes dogs’ coats to be black.

The ‘blue’ color gene is recessive. Both parents of blue brindle Boston Terriers need to pass on the gene responsible for blue.

As the brindle pattern is also caused by a recessive gene, this type of Boston Terrier is rare. The chances of both parents carrying both genes, and for them to manifest in the offspring, are low.

The seal coloration is not fully understood by scientists. Seal Boston Terriers are black but they seem brown when observed from certain angles. There is not enough research to explain this phenomenon.

The stripes on a seal brindle are sometimes almost invisible because they have a similar color.

Black brindle Boston Terriers have a black base and white markings. They display dark stripes on their back, which can be of different dark colors.

These colors are influenced by the combination of genes of every individual dog.

Black brindle Boston Terriers are often confused with black Boston Terriers. Sometimes the stripes are dark and are identified only when observed from a close distance.

Is a Brindle Boston Terrier Rare?

Yes, Brindle Boston Terriers are not as common as seal or black-coated Bostons. The gene that causes the brindle pattern is recessive, meaning both parents need to be carriers and pass on the gene.

Black or seal Boston Terriers can be carriers of the brindle gene. If they pass on the gene, it doesn’t guarantee the puppy will come out brindle though. But, the offspring can become carriers even without the pattern.

As most Boston Terriers are not brindle, it’s easy to understand why the pattern is not easily propagated.

These are the rarest colors for brindle Boston Terriers:

Even though these colors are rare, they are not desired by most owners. This is because the American Kennel Club does not include them in the breed standard.

As a result, these Boston Terriers can not take part in competitions and are not considered valuable parents by breeders.

The brindle pattern is sometimes confused with the merle pattern. This is why some people think it comes with various health issues.

The merle pattern can determine health problems in dogs when two merle genes are present. These problems include ocular and auditory defects.

The genes for the brindle pattern are not correlated with any health issues though. But, brindle Boston Terriers can carry the merle gene.

If they are mated with a dog that is also a carrier, there are chances the offspring will manifest the health conditions associated with the double-merle.

What Is The Price of a Brindle Boston Terrier Puppy?

Boston Terriers puppies cost between $500 and $1000 and you can expect brindle Boston terriers to be in the higher part of this range. The higher price is explained by their rareness.

When buying an expensive brindle Boston Terrier puppy, make sure their color is accepted by the American Kennel Club. If it isn’t, their price is not justified.

You will most certainly find one of similar colors at a lower price.

Brindle Boston terriers can have many colors but only some of them are accepted by the American Kennel Club.