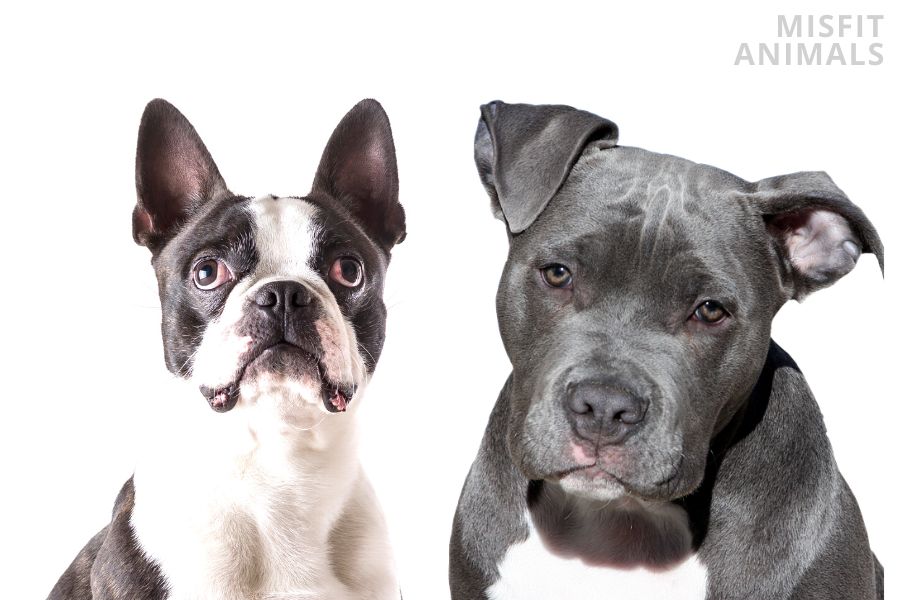 The Boston Terrier Pitbull Mix is the result of cross-breeding Boston Terriers and American Pit Bulls. This mix is affectionate and loyal. They form strong bonds with their owners and are protective of them.

If you are looking for an attentive cheerful dog with a muscular and athletic appearance, the Boston Terrier Pitbull mix is a great choice.

But, as with all dogs, they have their pros and cons (such as their great watchdog compatibilities).

This article explores the appearance of Boston Pits, as well as their temperament. You will learn what health issues they have a predisposition for and all about their origin.

The Boston Terrier Pitbull mix is a crossbreed with wide variations in appearance. The size of Boston Terriers and American Pitbulls differs, making the offspring either small or medium-sized. They are also loyal and playful.

This mixed breed has average intelligence and can be stubborn. They are charismatic and affectionate but unsuited for beginner owners because of their temperament.

3 Reasons To Get a Pitbull Boston Terrier Mix

The Pitbull Boston Terrier Mix has many good qualities, such as their minimal grooming needs. They also adapt to apartment living and make great watchdogs.

Pitbulls and Boston Terriers are low shedders. They are not hypoallergenic but they don’t leave big piles of hair around the house either.

This mix needs occasional bathing, only when they are dirty. Frequent bathing depletes the skin of their natural oils and leads to skin problems.

Weekly brushing is enough to keep a Boston Pitbull’s skin and hair healthy.

Boston Pitbulls have moderate energy levels: they experience both highs and lows.

They like apartment living because of their occasional laziness. If you provide at least 30 minutes of outdoor physical activity per day, a Boston Pitbull Terrier will be happy.

Do not leave them alone indoors for long. They can engage in destructive behavior.

Boston Pitbull Terriers are protective of their family members. They are not highly territorial but don’t like strangers.

As well-suited watchdogs, they will let you know when something is wrong. They have a strong loud bark, which keeps strangers away.

3 Reasons Not To Get a Pitbull Boston Terrier

Pitbull Boston Terriers are stubborn and need early training. They don’t like to be left alone and are not great with young children.

Both Pitbulls and Boston Terriers are both stubborn and easily distracted. The Pitbull Boston mixes need to be introduced to training techniques from puppyhood. To train them properly, they need a firm and calm trainer with a lot of patience.

Training Boston Pitbulls during puppyhood is essential. If they’re not trained early on, they become difficult to control in adulthood.

This is a key aspect to consider, especially because this mix is prone to aggression.

2. Boston Pitbull Terriers Don’t Like To Be Left Alone

Boston Pitbulls form strong bonds with their owners. They are clingy and love to spend time with their family members.

Pitbulls and Boston Terriers like to be around children. The problem is that children make sudden movements and tend to pull and hit dogs. This can scare Boston Pitbulls and lead to unwanted reactions, such as biting.

If Boston Pitbulls are introduced to children during their puppyhood, the risks of aggression are lower. Still, young children should not be left alone with Boston Pitbulls.

The exact origin of the Pitbull and Boston Terrier Mix is unknown. It is clear they were first bred in the United States, but nobody knows exactly when. Both parent breeds have a long and interesting history.

Boston Terriers were initially bred in Boston in the second half of the 19th century. The purpose of the breed was pit fighting. Initially, they were bigger and sturdier.

The breed was officially recognized by the American kennel club in 1893.

Boston terriers descend from White English Terriers and English Bulldogs. In its early years, the breed was called Hooper’s Judge, as its first owner was named Robert C. Hooper.

Pitbulls were first bred in the United Kingdom at the beginning of the 19th century. Their ancestors are Old English Bulldogs and Old English Terriers.

Pitbulls were introduced in the United States between 1845 and 1860 as descendants of the American Pitbull.

There are some mixed opinions on the American Pitbull amongst breed clubs:

The Boston Terrier mixed with Pitbull’s size varies, depending on which parent they resemble. They are usually medium-sized and have a muscular appearance. This mix comes in various colors and sometimes has white markings.

This table illustrates the main physical characteristics of Boston Pits.

They can also have mixed colors, markings, or patterns, such as the brindle pattern.

If one of the parents is a brindle Boston Terrier, the puppies inherit this pattern only if the other parent carries the gene for it.

Boston Pits have short hair and are single-coated. Their hair lies close to their body and has a slick appearance.

If they inherit the appearance of their Boston Terrier parent, Boston Pits have a shortened upper jaw and nose, prominent eyes, and a round face shape.

The Boston Terrier Pitbull mix is friendly and loyal. They are protective of their family members and engage in territorial protection. They are bold, confident, and fun to be around.

This table illustrates the traits Boston Pitbull Terriers inherit from their parents.

Boston Terriers have great personalities. They get this from their parent breeds. American Pitbulls consistently score more than 85% on the Temperament Test.[3]

Yes, Boston Terrier Pitbull mixes are predisposed to aggressive behavior. Both Pitbulls and Boston Terriers were initially bred for fighting. The aggressive gene is passed on to Boston Pitbulls.

In 2011, a study[4] analyzed aggression levels in shelter Pitbulls. They were compared to other breeds, resulting in no evidence that Pitbulls were more aggressive

But, a recent study[5] conducted in 2019 found a correlation between the purpose of a dog breed and how their brains evolved over time.

Their original purpose enhances the traits necessary for the job.

As Boston Terriers were initially bred for pit fights, and Pitbulls were bred for dog sighting and rat baiting, they needed a high level of aggression.

Even though these activities are banned at present, the breeds were involved in aggressive behavior for a long time. This enhanced their tendency to aggression.

As a result, they have a higher predisposition for aggression compared to other breeds.

You can minimize aggression in Boston Pitbulls in many ways:

Yes and no. Boston Pitbull Terriers bite if they are provoked but are friendly dogs, especially if they are trained since puppyhood. The issue with Boston Pitbulls is their bite is strong and can cause severe injuries. This happens because they have wide sturdy jaws.

Both parent breeds were initially bred to engage in aggressive behavior:

In 2020, a study[6] reported that pitbull bites were responsible for 72% of dog bite fatalities in the United States. This doesn’t mean people were not bit by other dog breeds, but that the Pitbull’s bite is strong enough to kill.

The strength of a Pitbull bite is between 240 and 330 pounds per square inch, while the bite of a Boston Terrier measures 269 PSI.

As a result, The bite force of a Boston Pitbull Terrier measures 277 PSI, on average.

The Boston Terrier Pit Bull Mix is generally healthy. But, they have a predisposition for various diseases common to its parent breeds.

How Much Does a Boston Terrier Pitbull Mix Puppy Cost?

A Boston Terrier Pitbull mix puppy costs between $300 and $1200, on average. Some breeders sell them for more, depending on the reputation of the breeder. The quality of the parents is also a factor that influences the price of a Boston Pit.

Boston Pits are rare in many areas. This inspires breeders to ask for higher prices, around $1500.

The Boston Terrier Pitbull mix is an interesting crossbreed. This mix is loyal and protective but not suited around young children. Boston Pits make great watchdogs and adjust well to apartment living.

Boston Pitbulls have a predisposition for aggression and their bite can be lethal. This is why they need early training and socialization. Physical activity and mental stimulation are essential for controlling their aggression.