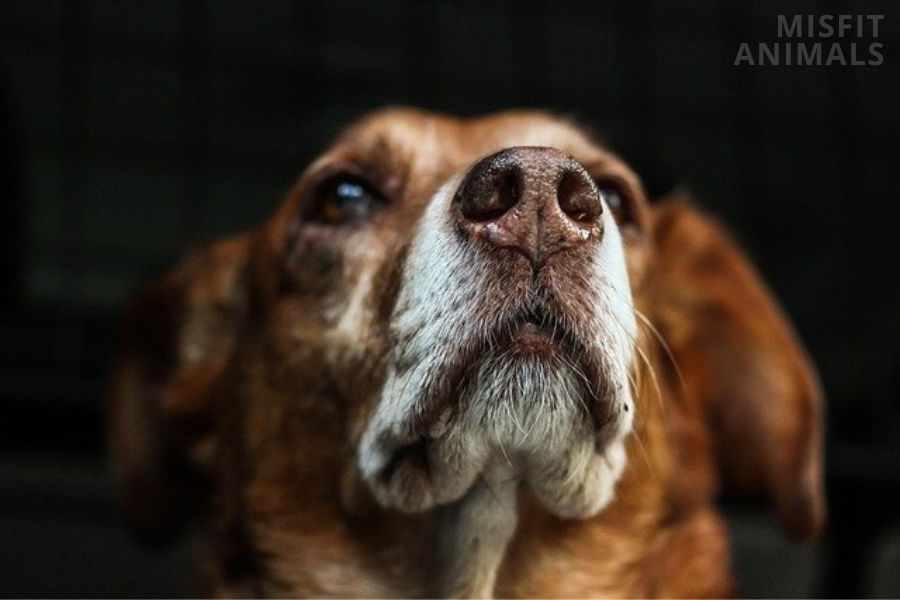 Bumps on the nose of dogs appear for hereditary, inflammatory, or parasitic reasons. In some cases, these growths are cancerous tumors. These masses usually seem like they develop overnight and are red or ulcerated, hard, and immovable. Contact the vet if your dog has a bump on its nose.

Most dog owners associate bumps or lumps on their pet’s bodies with cancer. These bumps can be a sign of numerous medical conditions.

Some bumps are hereditary and do not pose any serious risk to your dog’s health. There is no need to panic about every new bump on your pet’s skin.

If the bump appears overnight, it should be a cause for concern. But even then, you can’t know if it is cancer until you consult the vet. Bumps on the nose or elsewhere on the body should not be ignored.

In this article, you will find out why dogs get bumps on their noses, what the symptoms are, what you can do, and much more.

Why Does My Dog Have a Bump on Its Nose?

The most common causes that lead to bumps on dogs’ noses are bacterial infections and parasites. Cancer and autoimmune diseases are not as common but are possible causes. The most common symptoms include hypo- or hyperpigmentation of the nose, ulcers, crusts, and redness.

Dogs frequently develop bumps. These are either skin conditions, insect bites (or other parasites), or allergies.

When dogs develop skin conditions on the notes, it’s known as nasal dermatoses. This includes both the hairy part (nasal bridge) and the hairless part, where the nostrils are (nasal plane).

There are several specific causes behind bumps on a dog’s nose:

Bacterial infections can cause bumps on the nose and are not something worry about. They are usually treated with local antibiotic cream.

Bacterial infections affect only the superficial layer of the skin and hair follicles. The most common bacteria that cause this condition are those of the genus Staphylococcus and Streptococcus.

The most common symptoms of bacterial infections are as follows:

Treatment of bacterial skin infections is not complicated and usually includes local antibiotic creams and application of antiseptic shampoos 2-3 times per week.

Oral antibiotics and anti-inflammatory drugs are usually prescribed when the bacterial infection is severe.

The most common parasitoses in dogs are those produced by mites and ringworms. Both parasites lead to the appearance of bumps, crusts, and itching on the skin, including the nose.

There are two parasites that lead to bumps on dogs’ noses:

Demodex mites that parasitize dogs include:

Demodex mites are microscopic vermiform parasites, which are normally found on dogs’ bodies. They are transmitted by the mother to her newborn puppies.

When dogs have a weak immune system, the mites multiply excessively and cause illness (demodicosis or demodectic mange).

The most affected dogs are puppies with bad hygiene and care.

Demodicosis has two forms (dry and wet) and the symptoms include the following:

Ringworms cause dermatophytosis in dogs. Contrary to its name, ringworms are not worms but a type of fungus.

These filamentous fungi digest keratin and are part of the following genera:

Dermatophytoses are more common in warm periods and humid environments. Excessive bathing or cleaning can also lead to the appearance of mycosis, as the natural barriers and oils of the skin are removed.

Ringworms are called so because the lesions often look like rings. This is not always the case, making it easy to miss.

The symptoms of dermatophytoses include the following:

Demodicosis is treated over a long time. The goal is to achieve the following:

In the treatment of dermatophytosis, the general health of the dog is important. If the dog is in good health, the symptoms disappear faster and resolve completely in three months.

It is recommended to apply antifungal treatment whenever a dermatophyte infection is detected. This way, you reduce the chances of infection for other animals and humans and the spread of spores in the environment.

Some autoimmune diseases can lead to the appearance of bumps on the nose of dogs. These include pemphigus and lupus.

Pemphigus is characterized by blisters on dogs’ skin. These blisters break and leave the skin surface without hair, with grayish-yellow crusts, scales, and ulcers.[5]

The most affected body regions are the face (including the nose and lips), ears, groin, perianal region, chest, and abdomen.

This condition can be confused with lupus erythematosus. A cytological and histological examination is necessary for differentiation.

The standard treatment for pemphigus in dogs is the use of immunosuppressive drugs. They can be used alone or combined with other medications.

The prognosis of the disease is good, as dogs go into remission after 4-7 weeks from the start of the treatment. The remission rate is 50%.

Lupus erythematosus in dogs is a common autoimmune disease, mainly located on the following sections of their bodies:[6]

Unlike pemphigus, lupus does not develop all over the body.

The symptoms of lupus erythematosus in dogs include:

Effective control of pemphigus can be achieved without the use of strong immunosuppressive drugs.

It is also recommended to avoid exposure to UV radiation (it is one of the causative factors of the disease) and to use sunscreen on dogs’ noses.

Other alternative methods of treatment include the administration of antibiotics (doxycycline), vitamin B3, vitamin E, and omega 3 and 6 supplements.

Topical corticosteroid creams may also be helpful in such cases.

There are three common types of cancer that can affect dogs’ noses both externally and internally:

The main reason why dogs develop nasal adenocarcinomas is unknown, but there are certain predisposing factors:[7]

Dogs with long noses are more affected than those with short noses.

The symptoms of nasal adenocarcinoma are often confused with those of allergies:

Squamous cell carcinoma is a type of cancer often caused by prolonged exposure to the sun. It is aggressive cancer that quickly destroys the surrounding tissues.

The most common symptoms include the following:[8]

This type of skin cancer rarely spreads to other parts of the body until its later stages.

Malignant melanoma is the most dangerous form of skin cancer. It grows and spreads to the lymph nodes and other organs fast.

The most frequent location is in the hairless areas that are most often exposed to UV rays, such as the mouth and nose.

The main cause that leads to the development of malignant melanoma in dogs is still unknown.[9]

Most nasal cancers are treated by removing the tumor mass. Depending on how deep has penetrated into the adjacent tissues, it is possible to remove a piece of your dog’s nose (nosectomy).

Radiation or chemotherapy is also recommended, depending on the severity.

Insect Bites and Direct Contact With Irritating Substances or Plants

Insect bites and irritating substances can lead to the occurrence of red bumps or blisters on the nose and lips.

Insect bites can lead to the appearance of small, red, itchy bumps. These usually go away on their own.

If the bites become infected or are extremely itchy, the vet can prescribe local antibiotics or anti-inflammatory ointments.

If dogs come into contact with irritating plants or substances, blisters can appear on their nose and lips. These blisters break and form lesions and crusts. The treatment is similar to that of insect bites.