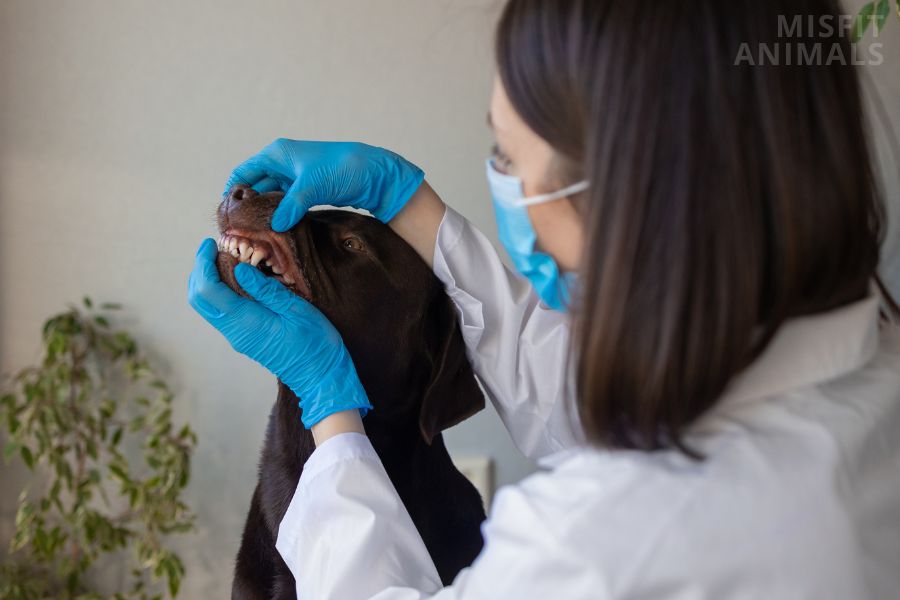 White bumps on dogs’ lips are caused by papillomavirus, insect bites, trauma, and acne, with papillomavirus being the most common cause. Papillomas are contagious to other dogs; therefore, you should not let your dog play with other dogs. Contact the vet if your dog has white bumps on its lips.

Dogs use their mouths to eat, drink, and communicate. If a medical condition occurs around the mouth, including the lips, dogs can no longer fulfill these basic needs.

That’s why it’s important to look out for.

White bumps on the lips can mean many things. The most severe and common cause is the papillomavirus. Because of this virus, warts appear on the dog’s lips (outside and inside).

When there are many warts on the lips, dogs are no longer capable of eating. Sometimes they also bite the tumors, causing bleeding and pain.

In this article, you learn the causes of the white bumps on dogs’ lips, what to do, and more.

Why Does My Dog Have White Bumps on Its Lips?

There are many reasons why white bumps on dogs’ lips occur, including acne, cysts, or papillomas. Papillomas are contagious, so if your dog suffers from this condition, make sure it does not come into contact with other dogs.

There are three main reasons why dogs develop white bumps on their lips:

All these medical conditions are treatable and do not endanger dogs’ lives unless complication arises. For example, dogs can die if they are very allergic to insect bites, but this is rare.

Acne is a common problem among dogs in puberty (5-8 months). This medical condition causes hair follicles to become inflamed and irritated.

Even though acne is an unpleasant condition, it disappears quickly. Mostly when the pet is well cared for.

Acne is more common in dogs with short hair:

Among the many causes of acne, the most common are as follows:[1]

Symptoms of acne in dogs include:

Good hygiene and treatments with creams and ointments are essential measures for dogs suffering from acne.

White bumps on dogs’ lips can be cysts. These appear for many reasons:

Trauma is represented by:

Sebaceous cysts are common types of skin cysts that contain sebum. Sebum is a thick, oily material that is normally found in the skin around hair follicles. These masses can be found anywhere on the body, including the lips.

Treatment may consist of local ointments, drainage of the infected cyst, oral antibiotics, or surgical removal.[2]

Sebaceous cysts need to be sent to a lab after their removal. A veterinary pathologist will determine if it is a sebaceous cyst, an adenoma, or adenocarcinoma, which may need more treatment.

Papillomatosis is a viral disease caused by a virus from the papovaviridae family. These DNA viruses replicate in the cell nucleus and produce warts on different parts of the skin[3], especially around the mouth of dogs.

Papillomavirus is a contagious disease that is transmitted in three ways:

The papillomavirus can live in the environment for weeks, so it is possible for dogs with warts to leave the virus behind and then for another dog to pick it up later.

It generally takes a month or two for warts to develop after infection.

Multiple papillomas are more common in young dogs, whereas older dogs often develop single papillomas. These do not always have a viral cause.

There are three clinical forms of canine papillomavirus infections that are described in dogs:

The first (and the one that interests us) is canine papillomatosis of the mucous membranes, which primarily affects young dogs with a low immune system.

It is characterized by the appearance of numerous warts on the oral membrane. This stretches from the lips to the esophagus, the conjunctival membrane, and adjacent hairy skin.

When the oral cavity is strongly affected, dogs have trouble chewing and swallowing.

The other two forms are cutaneous papillomas and cutaneous inverted papillomas. Once a dog has been infected with one type of papillomavirus, it is immune to that type but not others.

Related: Why Dogs Get Bumps On the Mouth

Symptoms include the appearance of warts on the lips and in the mouth of dogs. They resemble white or grayish bumps, cauliflower-shaped, and of various sizes. These growths can also appear as white bumps on your dog’s snout or tongue.

Sometimes, warts on dogs’ lips are so numerous, large, or located in such a way that they cause secondary symptoms such as difficulty eating and drinking.

Other times, dogs bite these warts and cause bleeding. In this case, another symptom you will see is blood in your dog’s saliva.

Warts can also become infected with bacteria, in which case you will see pus or smell a foul odor coming from your dog’s mouth.[4]

Warts generally disappear on their own within a few months as the dog develops immunity against the virus. But there are also situations when veterinary treatment is necessary.

In rare cases, warts that do not heal on their own can turn into cancerous tumors. In general, warts that are present for more than 3-5 months should be treated by a vet.

Dogs that take immunosuppressive drugs or have other severe health conditions may not be able to get rid of warts without help.

If one or more warts are a cause for concern, surgical removal is the best treatment. This is done with a scalpel, laser, or cryosurgery (using intense cold to destroy the wart).

Unfortunately, it is difficult to assess how effective these treatments are since most dog warts disappear on their own.

Drugs are often needed when a large number of warts are present.

Why Is My Dog’s Tongue White?

If your dog’s tongue is white or has a pale color, it is not normal and may indicate an underlying condition. The most common cause of a dog’s tongue turning white is anemia. Anemia is the decrease in the number of red blood cells and can occur as a result of intoxication, internal parasites, heart disease, and others.

A blue tongue can mean that your dog does not have enough oxygen in its blood, and its body does not oxygenate properly. These diseases put your dog’s life in danger, so it is recommended to go to the vet as soon as you notice that your dog’s tongue has an unhealthy color.

What is the White Growth on My Dog’s Tongue?

The most common cause of white growth on your dog’s tongue is papillomatosis. This condition is caused by a contagious virus (papillomavirus) that is transmitted from dog to dog and through objects. The disease usually disappears after a few months when the dog develops immunity. Cancer can also be a cause of the appearance of white growth on dogs’ tongues.