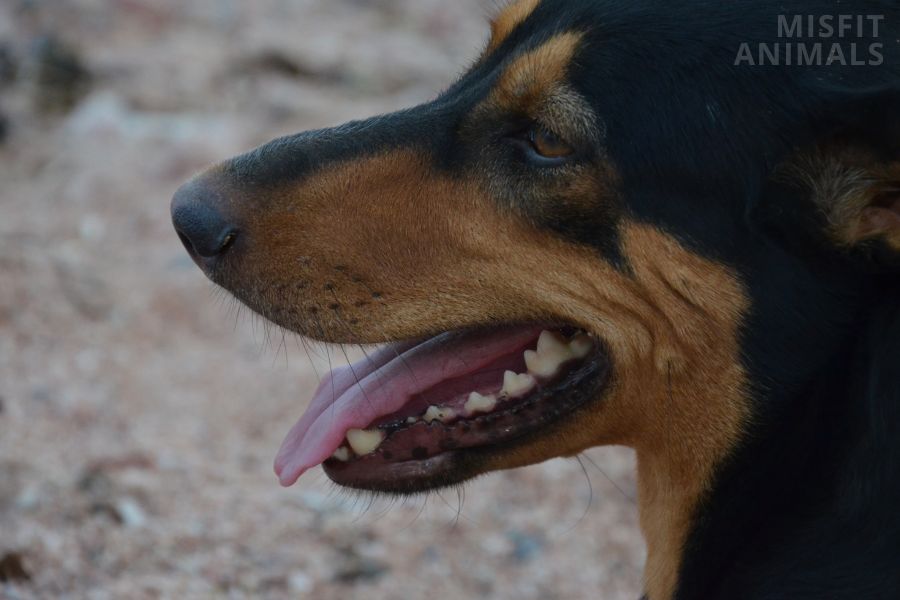 Bumps on dogs’ faces are moles or skin tags (which are normal) or caused by medical conditions such as acne, warts, or tumors. Don’t panic when you see a bump on your dog’s face, as tumors are rare. Always contact the vet.

If you’re petting your dog and suddenly feel a bump, don’t worry. They are most often simple moles, skin tags, skin infections, or tumors.

While they are often harmless, bumps can also be cancerous, which is why it’s important to contact the vet.

In this article, you will learn why bumps on dogs’ faces appear, what they are, what you can do, and more.

Why Does My Dog Have a Bump on Its Face?

So, you have found one or more bumps on your dog’s face, and are wondering what it is.

Here are the possibilities:

There are slight differences between them all, so look for the following:

They can appear anywhere on the face, but the most common place is in and around the mouth.

Do not panic if you find a bump on your dog’s face, as they are rarely harmful. Instead, contact the vet.

Moles on dogs are not uncommon, but they are also not as common in dogs as they are in humans. Most moles are harmless, but there are cases where they represent severe conditions.

Harmless moles on the face are not surrounded by inflammation and don’t hurt unless scratched. They are flat or raised and darker than the skin color.

It is best to contact the vet as they can tell the difference between a harmless mole and a dangerous one.

Why Do Dogs Have Moles on Their Faces?

Innate moles (the hairy ones found under the chin) are not actually moles but vibrissae. They do not pose a health threat or medical issue.

The vibrissae help dogs pick up information about the environment. They are similar to cats’ whiskers, part of a tactile sensory organ in the face area:[2]

Dog Breeds With Moles on Their Face

All dog breeds have moles on their face (vibrissae), but it is more prominent In some breeds:[3]

Acne often occurs in young dogs and short-haired breeds. It is a medical condition where the hair follicles become inflamed and infected.

Several factors lead to the appearance of acne in dogs:[4]

Apart from the appearance of black or white bumps (pimples) on the face (muzzle, chin, and lips), acne is also accompanied by the following symptoms:

Is It Ok to Pop My Dog’s Pimples?

No, it is not ok to pop your dog’s pimples. Although popping a pimple isn’t life-threatening, it can lead to several complications:

An abscess is a collection of pus. It is painful and often caused by a bacterial infection. Abscesses can form anywhere on or in the body.

Skin abscesses are visible or felt deep in the skin. Abscesses on the face occur due to insect bites or traumas that penetrate the skin and create an entry gate for bacteria.

In terms of treatment, small abscesses shrink and resorb on their own. For large abscesses, the vet can prescribe an oral antibiotic treatment, drainage, and cleaning of the pus.

Some breeds have a greater genetic predisposition to cysts than others:

Hairless breeds such as Chinese Crested and Xoloitzcuintli can develop multiple cysts as the lack of protection increases the risk of sebaceous cysts.

Sebaceous cysts can become infected and accumulate pus. Depending on the severity, the following treatments are recommended for this condition:[5]

Warts are caused by a papillomavirus, which is why they are also called papillomas. This virus has an incubation period of 1-2 months and can live a long time in the environment.

Although warts are generally harmless and disappear by themselves within a few months, there are cases of harmful warts. These develop on the oral mucosa and esophagus, causing eating problems.

Papillomatosis is contagious and is transmitted to other dogs through direct contact or contaminated objects. If your dog has papillomatosis, do not let it have contact with healthy dogs and vice versa.

This disease is characterized by the appearance of pedicled, cauliflower-like bumps of different colors and sizes. Warts can appear anywhere on the body but most often appear on the face, especially in the mouth area.

Warts can be removed surgically if they do not disappear by themselves in a few months. This is recommended if they cause discomfort and pain.

Skin tags generally occur in old dogs and are small, noncancerous growths that appear mainly due to friction. They rarely occur on dogs’ faces, but they can be found around the eyes.

They are not harmful, and treatment is cosmetic.

Bumps on dogs’ faces can be benign tumors, though these are rare compared to acne, moles, or warts.

The color of tumors varies from pink to black, and they have different sizes and shapes. They are generally soft and mobile and do not affect the surrounding tissues.

Old dogs are more prone to develop tumors on the face, but there are cases when they appear in dogs under three years old.

Treatment consists of the surgical removal of the tumor. Benign tumors rarely reoccur.

Malignant or cancerous tumors are often life-threatening. They can spread at a distance in the organism, causing damage to organs.

There are three types of skin cancer in dogs:

The color of tumors varies from pink to black, like benign tumors. The differences lie in their appearance and consistency. Cancerous tumors are usually hard, immovable, and have an irregular surface. They often ulcerate and cause bleeding and pain.

Treatment generally consists of the removal of the tumor and the administration of chemotherapy or radiotherapy. Cancerous tumors reoccur often.