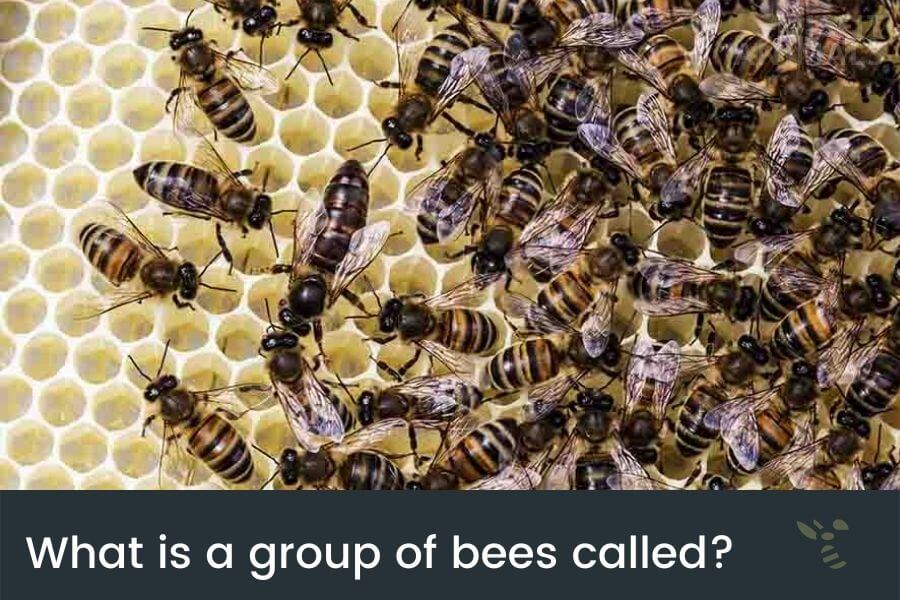 “What is a group of bees called?” you might ask. Well, the answer to that question is situational.

A group of bees can be called different things depending on the circumstance. In general, you can call them a group of bees, but they can also be called a colony, swarm, ball of bees, cluster of bees, and congregation of bees.

In this article, we’ll dive deeper into the differences.

It Depends on the Circumstance

Bees do various tasks depending on the season, as well as the time of day. Depending on what they’re doing, you can call bees different things.

If you want to use a general term that can be used at all times, you can simply call them a group of bees. This would be a correct term, but if you want to be more specific, you’ll have to use different terms.

A colony of bees is a group of bees living together in a beehive. Colonies can vary, but colonies have been observed to become as large as hundreds of thousands.

The term “colony” is simply another word for “group”, but has a slightly different meaning, as this suggests the bees live together.

Related: How Many Bees are in a Beehive?

A swarm of bees describes a large group of bees flying together. Many bees will take to the sky with the queen when she leaves the colony. This can either be to mate or to start a new colony somewhere else.

Swarming can occur for a number of reasons, but it’s usually because the queen is off to start a new colony because the current one is overcrowded.

The queen may also have been replaced, and since there can only be one queen, the old one has to leave.

Swarming often takes place from late April to June during the peak of bee season.

Bees aren’t aggressive – usually. If they sense a threat, they may attack though. When they attack collectively, they will surround their enemy, creating a ball of bees.

This may be a large wasp or hornet, who’s threatening the colony.

You will be able to witness balls of bees in the spring and summer months, as bees are dormant during the winter. In the winter months, they’ll cluster up.

5. A Cluster of Bees

A cluster of bees is what a group of bees is called when they cluster together. This is done to conserve energy and heat during the winter.

Honeybees aren’t active all year. They will work hard during the spring and summer, slow down activity in the fall, and go dormant during the winter.

On cold days, they have to conserve heat. They will cluster up around their queen to make sure she’s safe and warm.

Now, this doesn’t count for all bees. Some bees that live in warmer places are active all year round, and bumblebees hibernate alone (the queen bumblebee is the only bumblebee alive at this time of year).

A drone congregation area is a place where a large number of drones wait for a virgin queen to come and mate.

Males constantly buzz around the DCA (Drone Congregation Area), as they await new virgin queens to arrive to mate.

While you can use “a group of bees” in all instances, the different terms help with specifying the context of what the bees are doing. A swarm of bees is very different from a cluster of bees, as they’re actively flying in the first scenario, while they’re inactive in the second.