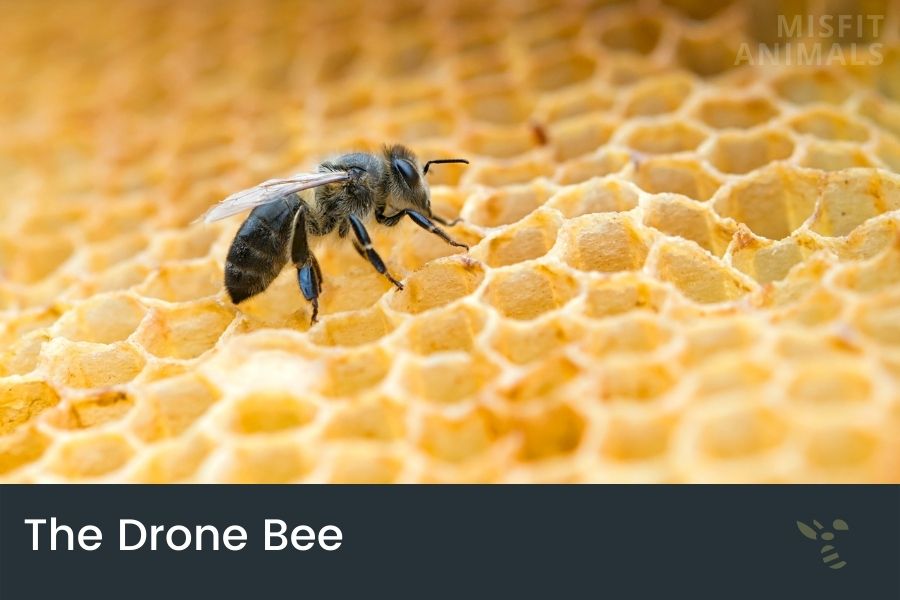 Male bees, known as drones, are vital to a beehive. They don’t do any work (like female bees) but they still play an important role in the overall survival of the hive.

The drone bee’s only job is to mate with the queen bee.

After they’ve successfully carried out this task, they’ll die, resulting in a very short lifespan.

In this article, we’ll dive deeper into the male bee, what they do, and why they’re important.

What Is a Male Bee Called?

Male and female bees have some differences when it comes to responsibilities, behavior, characteristics, and anatomy.

What Is a Drone Bee?

Drone bees are male bees, responsible for mating with virgin queens. They are usually larger than the worker bees and do not have stingers. They don’t forage, produce honey, or do any other tasks.

Because drone eggs haven’t been fertilized, they are haploid (containing only one set of chromosomes from the mother). Instead of having 32 chromosomes, they only have 16.

Female bees have 32 chromosomes since they get chromosomes from the egg, as well as the sperm when the egg is fertilized by the queen.

Role of the Drone Bee

Drone bees’ only responsibility is to mate with virgin queen bees. They don’t have any roles when it comes to hive maintenance, honey production, or any other tasks.

They simply sit around and wait until it’s time to fly out to mate.

What Does the Drone Bee Do?

The drone bees typically do nothing, up until the point where they have to mate. They will sit around in the nest, being fed by the worker bees. They can almost be considered parasites, as they only have a negative effect on the hive.

They are unable to collect pollen or feed the colony, so they only serve one purpose – mating with a queen honeybee.

Drones are also unable to sting, as they don’t have a stinger. They’re essentially incapable of taking care of themselves.

Drones look like regular honeybees, but they do have their own characteristics, that can be used for identification.

How Big Is a Drone Bee?

Drones are slightly larger than their sisters. The average male honeybee measures about 12-18 millimeters long whereas the smaller female is 10-15 mm long.

The main difference between drones and worker bees is their purpose in life. A drone bee will spend its entire life trying to mate with a queen bee, while worker bees spend their lives working.

Worker bees don’t have any reproductive organs and thus devote all their time to working in the hive.

As described earlier in the article, there are also slight differences in appearance, such as the fact that drones don’t have stingers, they are slightly larger, and have much bigger eyes.

Life Cycle of the Drone

Drones start out as eggs, just like any other bee. Drone eggs are different from worker bee and queen bee eggs, as they aren’t fertilized. This results in the drone bees having fewer chromosomes (16 instead of 32).

Drones have four stages of their life:

After about 3 days as an egg, drones will turn into larvae. Larvae look like small maggots. They’re cared for and fed, and well after about 6 days turn into a pupa.

When drones are in the pupa stage, they’ll have spun a cocoon around themselves. While in this cocoon, they start developing their external organs and body parts (legs, antennae, etc.).

At last, they will hatch into adult drones. When they’ve emerged, they won’t do much until they’re ready to take flight and mate with a queen.

Drones can mate up to 10 times with different virgin queens and will die shortly after.

How Long Do Drone Bees Live?

Drone bees typically only live for 3-5 weeks, but can survive up to 3 months. After they mate, they will die, resulting in this shorter life span.

Their life span is very similar to that of worker bees, who often live between 5-7 weeks.

Why Do Drone Bee Die After Mating?

Drone bees die shortly after mating. They can mate 7-10 times, whereafter their abdomen rips as the endophallus (the inner penis sac) are removed.

In other words, the death is caused by a rupture in the abdomen, as the drone’s reproductive organ is removed during mating. Their body experiences immense trauma, and their body is no longer able to function.

When bees mate, the drones will attach themselves to the rear end of the queen bee. As he ejaculates, he’ll fall back, while the endophallus remains attached to the queen, hence being ripped off.

One of the most interesting behaviors to note about a drone bee is that it appears lazy. In fact, it spends hours at a time simply lazing around rather than working.

Although this might seem like a wasteful behavior from an evolutionary perspective, drones play very important roles throughout their lives.

As previously mentioned, drones have one very important job to do – mate with the queen. Before mating, queens fly through drone congregation areas at high speeds.

Drone congregation areas are the mating grounds for bees. Drones will gather in big swarms while waiting for queens to take flight for mating.

The drones are able to easily keep up and will mate along her path as she flies by them.

Mating starts out by drones gathering in a drone congregation area (DCA). Here, swarms of drones will be waiting for virgin queens to mate with.

When mating, drones can mate with 7 to 10 queens before dying.

As mating takes place, the drone, a male honeybee, will insert his endophallus into the queen. After successfully mating, the drone will try to fly away, while the endophallus is still inserted in the queen. This results in a ripped lower abdomen, and the death of the drone.

During mating, the queen will store sperm for later use. While they only store about 3-5% of the total sperm acquired, they still have enough for 1.5 to 2 million fertilized eggs.

As the drones die, the queen bees simply fly back to their colony and will use the sperm they’ve acquired to fertilize eggs for the coming years (they can use sperm from a single mating flight for up to 8 years).

How Far Does a Drone Bee Fly to Mate?

While drones are strong fliers, they have their limitations. When they reach the drone congregation area, where they’ll mate with virgin queens, they need the energy to fly around. Hence, they can’t spend all of their energy to reach the mating grounds. [2]

Related: How far do bees travel?

Drones don’t have a stinger. Unlike workers, that have barbed stingers, and queens, that have smooth stingers, drones simply aren’t equipped with one, hence, they can’t sting.

This is most likely tied to the fact, that their only responsibility is to mate with the queen. They don’t protect the hive, they don’t forage, and they don’t make honey.

They leave all of the hive maintenance, production, and protection to the worker bees.

Related: Do all bees sting?

A drone congregation area (DCA) is an area where drones gather, waiting for virgin queens. Drones seem to gather in the same locations each year, even when queens aren’t present.

While the exact physical traits that attract drones and virgin queens to DCA’s are not fully known, there are several hypotheses on this topic. [3]

Features such as rivers, trail intersections, forest gaps, or large objects (big rocks or large trees) have been found to be important for navigation when drones and queens locate drone congregation areas.

Most mating takes place within these drone congregation areas. While drones bay chase after virgin queens for a chance to reproduce, they’ll stop chasing when the queen leaves this area.

How Many Drones Are in a Hive?

The number of drones in a hive can vary depending on the time of year. There’ll typically be a few hundred drones before mating season, while there’ll often be considerably less in the months after.

During the spring, summer, and early fall, there may be hundreds or thousands of drones in a single hive.

There are several reasons why drones make up a smaller percentage of the population. For starters, the presence of too many drones does not benefit the colony. This is because they don’t contribute to the work, like taking care of the young or foraging for pollen.

Drones are essentially parasites to the bee society, living off honey stores but contributing nothing to their upkeep.

Male bees are important to the reproduction of bees. While they don’t produce honey or collect pollen, they mate with virgin queens to ensure that new generations of bees and beehives can be born.

Drone bees typically don’t live very long, with an average of about 2 weeks. That’s because they die after mating.

In a single beehive, you’ll typically find a few hundred drones. Sometimes, the queen bee will experience reproduction incapabilities, which can cause her to increase the number of drones in the hive.

When this happens, the queen is most often replaced, as the worker bees want to avoid too many drones in the hive.

Drones are characterized by having large eyes (twice the size of regular bees), and a body size that’s a little bigger than that of a worker bee.

Do Drone Bees Do Anything?

No, drone bees almost don’t do anything. The drone bee’s primary role is to mate with the queen bee in flight. This means that all their energy and time are dedicated to this. Aside from mating, they do nothing and contribute nothing to the colony.