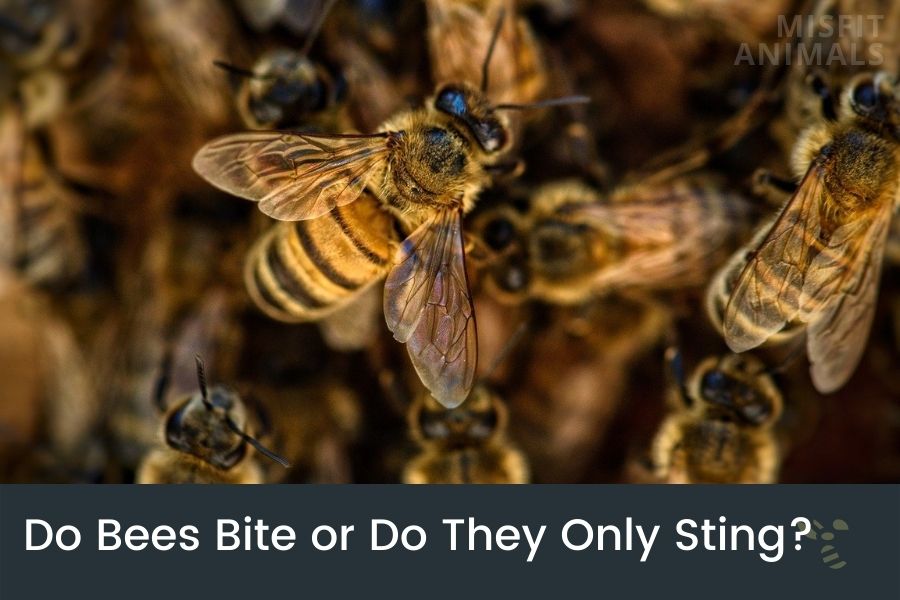 Bees can both bite and sting when attacking. Bees’ can also inject venom when they bite, but this venom is different from the one injected by their stinger.

The blog post will discuss what happens when humans get stung by these tiny winged insects, how we can avoid getting stung, what to do if we are unlucky enough to be bitten by one, and other interesting facts about bees.

Bees both bite and sting their victims when they attack. They aren’t limited to either one. Bee bites may look like a sting, as they’re small, red bumps that’ll itch and may cause some swelling.

One study shows, that bees also secrete venom when biting, just like when they sting. The venom, however, is different.

When a bee stings it releases an allergen called melittin and histamine into the human body. It causes swelling, redness, and itchiness in the skin near the site of the sting.

When a bee bites, it secretes an anesthetic called 2-H, or 2-Heptanone. This effectively paralyzes other small animals, but won’t harm humans.

What Kind of Bees Bite?

Only the female bees bite and sting. The males do not have a stinger and they aren’t aggressive. The female bees sting to protect their hive.

Bees will bite or sting if they feel threatened, and if they are trying to protect their hive.

If you are bitten by a bee, place ice on the wound to reduce swelling and discomfort. You can also hydrocortisone cream or an antihistamine pill to relieve pain and itching.

Bees have small teeth on their mandibles, making their bites even more painful.

Honeybees are not known to bite unprompted. As a whole, they are docile and will only attack when directly provoked or threatened.

Honeybees will sting and bite to protect their hives or colony. An attack should be expected if you provoke the bees, threaten them, or directly harm them. They’re also more inclined to sting when the weather is bad, as this can agitate them.

Bumblebees are the friendliest, most gentle, and calm bees of all the species in the world. They don’t bite or sting unless they feel like they have to.

If a bumblebee chooses to bite you, you wouldn’t feel much. They use their tongue to extract nectar, which is why their mandibles are weak. With weak mandibles, they aren’t able to bite with a lot of force.

Unlike other bees, that typically live in nests they build themselves or holes in the ground, carpenter bees make their homes in wood.

Although there have been some cases of carpenter bee attacks, it is generally considered quite rare.

Why Do Bees Bite?

Bees bite because they are protective of their hive. If they feel threatened, or otherwise disturbed, they will attack, both with bites and stings.

People usually get bitten by bees when they are gardening or just hanging out outside during the day. They may get too close to a nest, without even realizing it.

All people react differently to bee stings. Some people don’t feel anything. Other people feel a slight pinch, and some people get extreme pain with their sting.

If you’re bitten by a bee, you should take care of the bite as soon as possible, washing and cleaning it. If you’re allergic to bees, you should seek immediate medical attention.

Alarm Pheromone (2-Heptanone) is a pheromone secreted by worker honeybees to alert other bees of danger. 2-Heptanone signals other bees of a threat, which causes them to enter an alarmed state.

This is why beekeepers use smoke [1]. The smoke from a bee smoker mask the alarm pheromones that bees produce, which avoids any alarmed bees. As the alarm pheromone goes by unnoticed, the bees will remain calm, instead of becoming agitated.

When Do Bees Bite?

Bees will only bite when they feel threatened. This commonly happens when people get between the bees and their hive, or if people invade the space around the hive.

They may also be agitated if there is a lack of food or too many people in one area.

Mandibular bee venom is a potent and dangerous toxin and includes multiple biological compounds. This is especially dangerous to smaller animals or insects. Bees can even paralyze a target with their mandibular venom.

The same goes for the venom in their stinger.

While bee venom is nowhere near fatal for most humans, it can still hurt, cause itchiness, redness, and swelling. You should make sure to treat any stings or bites, as well as seek medical attention if they don’t go away within a couple of days.

What Happens if a Bee Bites You?

A bee bite, or sting, will cause temporary sharp pain, as well as redness, swelling, warmth, and itchiness. There should be no serious complications.

Are Bees Aggressive Towards Humans?

In popular culture, bees are usually depicted as being very aggressive towards humans. There have been countless stories about people getting stung by a bee and dying from an allergic reaction.

However, this is not true. Bees are generally docile, and friendly, creatures, who won’t do humans any harm. It’s only when humans pose a threat, or act aggressively themselves, that the bees will turn agitated and aggressive.

This is when they may attack.

Generally speaking, beekeepers don’t get stung a lot, which is a testimony to the non-aggressive nature of bees. Most beekeepers get stung less than 10 times a year, and they’re handling bees almost every day.

Stingless honey bees, or meliponinis, are found in tropical areas [2] and often make their nests in hollow logs. While they do have stingers, they’re reduced to the point where they can’t be used as a method of defense, hence they tend to bite instead.

Some stingless bees have very powerful and painful bites, and may even keep biting you until they die. [3]

Bees do bites, as well as sting, and these bites can be just as painful. When bees bite, they inject venom, as they do with their stinger, though the venom is chemically different.

Where bees’ stingers inject a venom intended to harm others, their mandibular venom has more of a paralysis effect.

Bees won’t bite unless they’re threatened. If you make sure to stay calm around bees, you’re going to be just fine. If you do get bitten, make sure to wash and clean the bite.

Bee bites can cause redness, swelling, immediate sharp pain, itchiness, and warmth around the bite. If you’re allergic to bees, you should seek medical attention.