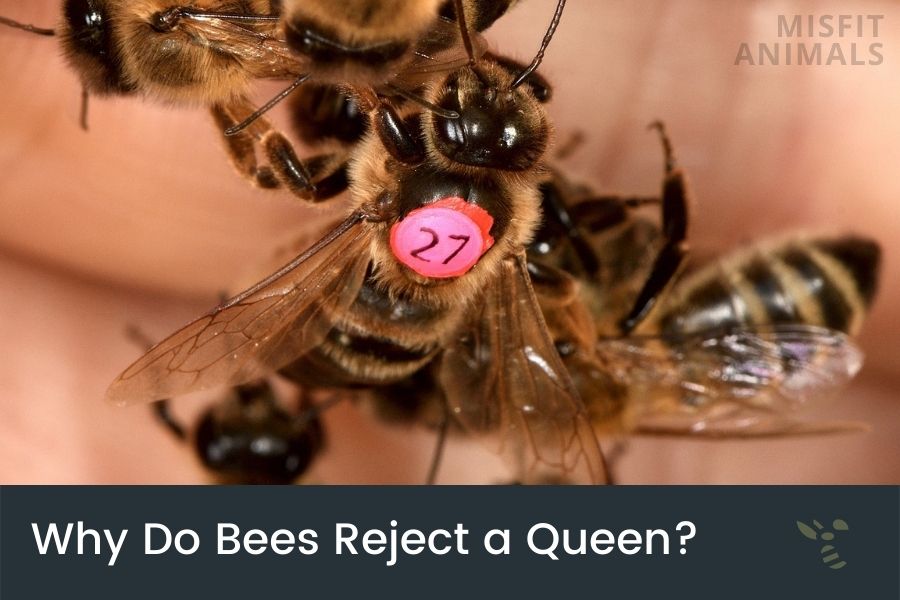 Bees may reject a queen if she’s incompatible with the colony, if they don’t trust her, or if she’s incapable of reproducing efficiently. If a queen is rejected, the workers will kill her.

Bees need a queen. Not for control, but simply for reproduction.

When a new queen is introduced to a hive, bees may choose to reject her. There are several reasons why this can happen, but it’s never good.

This blog post explores more about what happens when bees reject a queen, and how they deal with the problem.

Why Do Bees Reject a New Queen?

When a new queen is introduced to a colony, instead of the bees raising one themselves, they may reject her. This can happen for many reasons:

In other words, the reason for the queen’s rejection varies with the situation, but the outcome is the same.

When workers collectively reject a queen, they will kill her, by smothering and biting her to death.

The Queen Is Seen as an Invader

Queen bees release something called “queen pheromone”. This pheromone is used to identify the queen.

It also lets workers know if the queen is healthy, or if she’s dying or already dead.

Sometimes, when a new queen is introduced to a colony, the workers may sense her queen pheromone as foreign.

This can trigger an aggressive response in the workers, where they see the new queen as an invader.

When that happens, the workers will do everything in their power to destroy her.

For the worker bees to accept a queen, they must fully understand that she is not a threat. She is more readily accepted into the colony if she shares similar markings with them and is of their species.

The queen is responsible for reproducing. She’s the only one who lays eggs. Hence, it’s extremely important that she can do this properly.

A queen may lose her ability to reproduce properly. If a queen starts producing diploid males, the workers will notice that she’s not reproducing correctly.

Diploid males are sterile males. These are of no use to a bee colony, hence the queen is seen as failing to reproduce. [1]

If the queen reproduces normally, she’ll be accepted into the colony.

What Happens When Bees Reject a Queen?

As discussed, one of two things may happen when a new queen is introduced: The bees may accept her, or they may reject her.

The bees act under the responsibility of continuing their genes to the next generation. If they feel an inadequate queen is in place, they may kill her to make way for a better one.

If they decide not to kill her, they can raise another queen, who’ll take the old queen’s place when she’s ready. This is called “supersedure”.

Whether or not the old queen is killed, the bees will raise a new queen.

Queen bees are social creatures, and therefore they communicate with other members of the hive through gestures and pheromones.

When the colony rejects a queen bee, it will show certain signs. You can use these to avoid the death of the queen:

Beekeepers need to take note of why the queen was rejected. If they can properly diagnose this, they may be able to introduce a fitting queen next time.

Workers Will Form a Ball Around the Queen

When worker bees reject a queen, they’ll quickly try and kill her. They do this by creating a ball of bees around her.

This ball has two functions:

While in this ball formation, the bees in the center will also bite and sting the rejected queen.

If the queen isn’t rescued or removed from the ball, by a beekeeper, she’ll surely die.

The Bees Raise a New Queen

Since the bees have gotten rid of their old queen, they need a new one. If no queen is artificially introduced, they need to raise one themselves.

When it comes to raising a new queen, bees are in a race against time. They need to raise a reproductively mature queen before the colony dies.

Bees have a specific process for raising new queens:

When a new queen hatches, her first act is typically to kill the competition – the brood that has yet to hatch. After that, all she needs to do is mate.

Related: The Queen Bee & Her Role

Queen rejection is not completely random. Some factors can sway this process one way or the other.

Here are the most common things that can have an effect when it comes to queen rejection or acceptance.

Workers start by verifying and identifying the new queen.

They do this by smelling her pheromones and comparing them to their current queen’s scent. If the smells don’t match up, there can be conflict.

Pheromone traits can also be passed down from mother to daughter. A study shows that daughters of previous queens have a much greater acceptance rate. [2]

Queens can either be mated or virgins.

The difference here is that mated queens can start reproducing right away, while virgins need to mate before they can get to work.

One study shows that mated queens have a much higher chance of acceptance than virgin queens. This may be because the bees know she can start laying eggs right away.

They’re simply in a race against time.

This is also the reason why time is a great factor when it comes to queen acceptance.

The longer a hive has been queenless, the more inclined they are to accept a new queen – and there’s a big difference when it comes to time.

A study done on queen acceptance in queenless hives shows how big the difference is. [4]

Time of year is another important factor when it comes to queen rejection or acceptance.

Bees are more inclined to accept a new queen in the fall, compared to the spring or summer.

Similar to when bees are left without a queen for long, they become desperate in the fall. Worker bees know that winter is coming and that they need a queen to survive the winter.

On the other hand, the acceptance rate was lower in the spring and summer, when the bees can raise their queen. In these times, the bees have plenty of access to nectar to make honey and royal jelly.

How Does a Colony Get a New Queen?

Bees have two primary ways to replace an old queen: supersedure or swarming.

Both involve introducing a new queen, where the bees raise themselves.

First, all the worker bees in the hive begin to raise new queens by feeding royal jelly to several eggs that the queen laid.

This queen brood will then hatch into virgin queens.

Related: How does a bee become a queen?

Supersedure is the process of replacing an old queen with a new one, with an overlap. Meaning, the old queen is kept alive until the new virgin queen can take over.

This can end in two ways:

Supersedure is triggered by declining pollen availability and decreased brood production by the current queen. [5]

If this process takes place over the winter, the colony may die before spring comes around. The new queen will be unfertilized, meaning she can’t reproduce until she mates in the spring. [6]

Swarming is the process of a queen bee flying off with a bunch of workers to start a new hive somewhere else.

Swarming is an essential part of the beehive life cycle. In the spring, after the queen has increased reproduction, there may be too many bees in the hive.

This can also be triggered by an increase in pollen and drone production.

Before the queen swarms, she’ll have laid eggs in queen cups, ready to be raised into new virgin queens. This is done to make sure the hive isn’t left queenless.

Requeening is the process of artificially adding a new queen bee to a beehive. Requeening is another word for “queen again”.

A beekeeper will take out the existing queen, and replace her with a new one. This can be done for several reasons, such as increasing honey production.

This can also be done to increase the population of the beehive.

An experiment was done to test how requeening affected the population of beehives when requeening occurred in late summer or early fall. The results were an average increase of 8,637 bees. [7]

How to Introduce a New Queen and Avoid Rejection

Here are some things beekeepers can do to avoid rejection when requeening:

How Do Hives Otherwise Become Queenless?

A beehive can become queenless in several ways:

We’ll dive deeper into these topics below.

Related: How Many Queen Bees Are in a Hive?

The first way a beehive can become queenless is if she dies. This can either be by natural causes or because of a parasite.

When this happens, the bees will only realize this after the levels of queen pheromone drops.

Worker bees can detect the level of queen pheromone. When it’s low, they know something is wrong.

When a hive becomes too big, or if the queen is for some reason rejected, she will swarm (if she isn’t killed).

This involves the queen flying away from the hive, usually bringing some worker bees with her.

To avoid the hive from staying queenless for too long, the queen will often have laid eggs in so-called “queen cups”. These will turn into new virgin queens when raised by the workers.

The Queen Is Killed

The queen can also be killed. Either by humans or by the workers themselves. As stated earlier, if rejected, the queen may be killed.

Worker bees will create a ball around her, smothering, biting, and stinging her until she’s dead.

Related: What Happens When a Queen Bee Dies?

The loss of a queen is among the most detrimental events that can happen to a bee colony.

Although the hive may take some time to recover, the loss won’t be fatal if the bees act fast.

If the worker bees can manage to raise a new queen, before they die, the colony will survive.

It’s not uncommon for a colony to reject their queen. This often happens if she’s reproducing incorrectly (for example only giving birth to drones), or if a new queen is introduced without being a match.