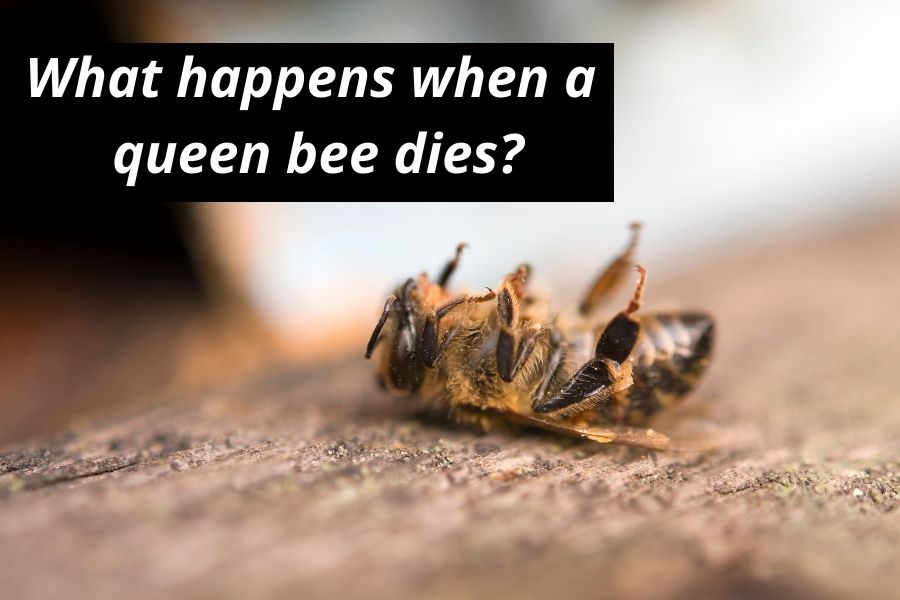 The queen bee in a colony is the most important one in the hive. Without her, no new bees are born.

The fate of a bee colony lies upon the shoulders of the queen – until she passes away.

When a queen bee dies (or if she’s killed), it is up to the worker bees to select and raise either another queen or a drone.

Let’s take a closer look at a queen bee’s primary role and her impact on the colony – as well as what happens when the queen dies.

One queen rules them all:

The Queen Bee’s role in a hive is relatively straightforward – she lives for overall hive propagation (breeding and reproduction). She lays eggs and makes sure new worker bees can take over from the old ones.

A virgin queen (a queen before she’s mated), will set out on her mating flight to find drones (males) to mate with.

Once this is done, she will start her colony.

Her fertility levels drop over time, and after 2-5 years, the colony will replace her with a new queen that has yet to mate. This happens either if the queen dies, or if she leaves the nest.

The old queen can leave with a part of the hive’s workers to find another suitable nesting spot where they can start over again.

When a queen bee dies, the colony will at first be upset. Then, once the initial panic has passed, the workers will start preparing for a new queen to take over. The workers will find eggs less than 3 days old, and move them to special vertically hinged cells called “queen cells”.

This process can be split in two:

You can read more about this process below.

A Lack of Queen Pheromone

Queen bees produce something called “Queen Pheromone”. This is a chemical only produced by queen bees by the queen’s mandibular glands.

Worker bees are attracted to this pheromone, and it is the presence of this pheromone that lets workers know where the queen bee is, and even how healthy she is.

A worker bee can not only detect the presence of queen pheromone, but it can also measure its level. A dip in the queen pheromone levels suggests that something is wrong with the queen.

Its five known components are:

The queen produces about 500 μg of her queen pheromones on a daily basis.

This is picked up by worker bees that groom her. They will then, unknowingly, spread it throughout the hive.

When a queen dies, the queen pheromone levels with fall, letting workers know that she’s passed.

The main sign of a lack of queen pheromone is the creation of queen cells. These are enlarged, vertical hinged worker bee cells that contain pollen and honey, which larvae can then feed on during their development.

This is where future queens are hatched.

When the queen pheromones disappear, the worker bees can start laying eggs. They will do this and place selected ones in the queen cells.

Why Would a Queen Bee Die?

There are many reasons why a queen bee would die. For instance, disease, old age, or predation. However, the most common reason that queens die is due to their having outlived their reproductive usefulness, being replaced with a new queen.

The latter is known as “supersedure.”

Supersedure is defined as:

“The act or process of superseding; especially: the replacement of an old or inferior queen bee by a young or superior queen.”

Do Bees Kill Their Own Queen?

Yes, bees can, and will at times, kill their own queen. When a bee colony decides it is time for a new queen, they can decide to kill her. This can happen for several reasons.

For one, the queen might not produce enough offspring. If her reproduction slows down, or if she produces too many males, the worker bees may decide to kill her and introduce a new queen.

This system works so well because of how quickly the bees decide to replace their old queen with a new one.

What can also happen is queen-on-queen fighting [1]. If more than one egg-laying reproductive female reaches maturity at roughly the same time, they will fight each other until only one remains alive.

Some older queens can also kill off new queens, who haven’t hatched yet.

What Happens if You Kill a Queen Bee?

When you kill a queen bee, the bees will go through the same process as if the queen died on her own. They will first panic a bit, but they will eventually start developing queen cells to hatch a new queen.

How Bees Find a New Queen

New queens can be found in a few different ways, the most common being grooming larvae to become the new queen.

Here’s how the process goes:

Eggs Are Taken to Queen Cells to Hatch

Queens don’t come from special eggs – instead, they are developed through a richer diet.

Now, to be on the safer side of things, bees always prepare a few of these larvae. This is because the bees only have one shot at this. If the brood dies or the queen cells are damaged, the hive will die.

The Virgin Queens Will Mate

The virgin queens will mate with about 15 different males during the one or two mating flights they take.

After mating, the queen uses the sperm to reproduce. Now, the colony is finally growing again.

As the queen starts reproducing, she won’t fly again (or not until it’s time to swarm at least). She won’t have to gather food, as her workers will do it for her. She’s now the queen of the hive until something happens to her or the colony that forces her out of her role.

The Potential New Queen Bees Fight to the Death

As said, bees will make more than one virgin queen. As more queens are present, they will fight to the death – there can only be one.

During this fight, all of them will die except for one. According to scientists, the death rate is as high as 87 percent among those fighting for supremacy.

Now, if one bee hatches before all of the others, she will usually kill them off, before they even become virgin queens. This is done to prevent any of them from growing up to challenge her.,

How Long Does It Take To Raise a New Queen?

It takes between 10-16 days to raise a new queen. First of all, it takes 3 days for eggs to become larvae, then 3 days for the larvae to grow, and finally 10 days of grooming from the worker bees, until the larvae hatch into a virgin queen).

What Happens if a New Queen Isn’t Found?

If a new queen bee isn’t found in time, the colony will simply die. Since there’s no one to lay eggs, the workers will eventually get old and die. Hence, the hive must have a queen to survive.

Worker Bees Will Begin to Die

The first sign of a failing or failed hive is that the remaining worker bees will die.

This is because they have no queen to lay eggs or organize the colony. Without new workers being born, there will be no future generations, thus, leaving the remaining worker bees to survive on their own, until they die.

The queen bee also produces a particular type of pheromone that will keep the colony calm and collected. So, if the queen dies, you can expect panic to occur in the hive because they have no leader to coordinate their actions.

How Long Will Bees Stay In a Hive Without a Queen?

A normal honey bee will usually survive for about four to six weeks without a queen. They won’t leave the hive, as they have nowhere to go, and no queen to follow to a new hive. They will simply die, one by one.

How Long Before Bees Realize They Are Queenless?

It doesn’t take long for bees to realize that they have become queenless. This depends on the layout of their hive but usually doesn’t take more than 30 minutes to a couple of hours.

This is because of the so-called “queen pheromone”.

As discussed earlier, the queen releases pheromones that let the worker bees know where she is, and that she’s alive and healthy. It also keeps the colony calm and helps the queen organize her workers.

When she dies, this pheromone slowly disappears.

As bees can detect the level of this chemical, they will quickly catch on. This will leave them “panicked”, but after a while, they will start organizing the rise of a new queen.

To summarize, when the queen bee dies, the workers raise a new queen. They will do so in queen cells, where eggs or larvae will be fed a special diet. This is what makes a queen bee a queen.

Bees will make multiple new queen bees to make sure that one of them is fit to take over. Once this new queen hatches, she will kill off the competition, to make sure she’s the sole ruler.

If no new queen is made, the colony will die. Queens will survive for about 4 to 6 weeks before dying off.