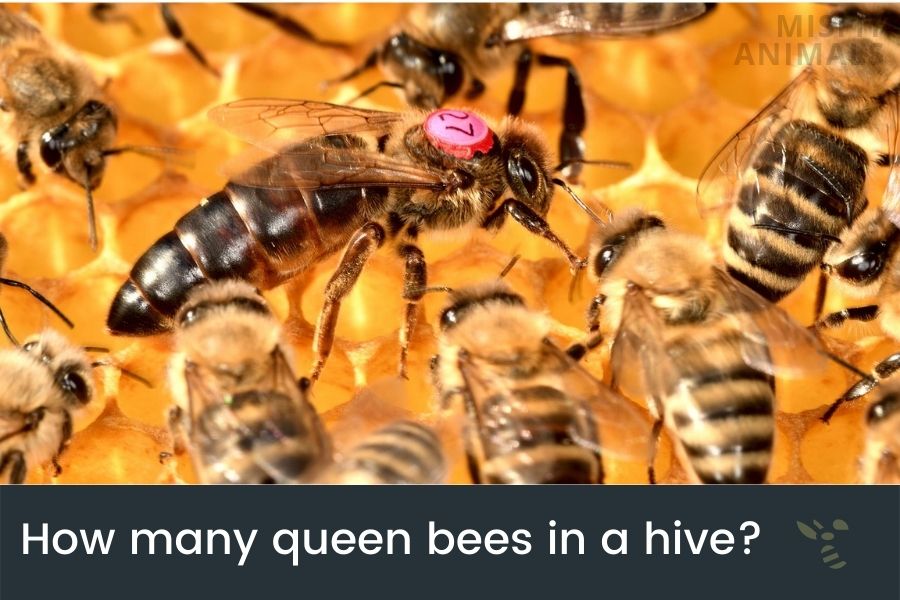 One of the most important aspects of a beehive is the queen. She lays all of the eggs that later hatch into workers necessary for colony growth.

There will, in most cases, only be a single queen in a hive. One bee is responsible for all reproduction.

In this article, we’ll dive deeper into the topic of queen bees, their role in the hive, and how there can even be multiple queens in some cases.

How Many Queen Bees Can There Be In a Hive?

A beehive consists of a single queen, several hundred drones, and 40,000-50,000 female worker bees. Under certain circumstances, there can be more than one queen though.

When the queen dies or gets old, the worker bees will start raising new queens. They will prepare several larvae for this process.

Once the first of these new queens hatch, she’ll under normal circumstances kill the other virgin queens who have yet to hatch.

This ensures her role as queen.

Related: How many bees are there in a beehive?

Are There Ever More Than One Queen?

The rule of thumb, when it comes to queen bees, is that there can only be one. However, like most general rules, it does come with an exception.

If the hive gets too crowded, the old queen will prepare to swarm (fly off to find a new nesting site), but not until a new queen is ready to take over.

Another possibility is that more queens hatch at the same time. There will only be multiple queens for a short amount of time though, as they will fight to the death for the spot as queen.

A study was done on sustainable multiple-queen colonies and showed, that if you modify the biological factors that trigger the fight-response in queen bees, you can achieve a hive with multiple queens [1]. One hundred of the colonies (78.1%) retained all introduced queens.

Why Is There Only One Queen?

There’s only one queen because of the workers. The worker bees usually won’t tolerate more than one queen bee, so even if the queens can get along, the workers can kill off the excess.

Related: The Queen Bee & Her Role in the Hive

When Is There More Than One Queen Bee in a Hive?

There are 3 situations where there’d be multiple queens:

Supersedure is defined as:

“The replacement of an old or inferior queen bee by a young or superior queen.”

When the current queen gets too old or loses her ability to lay eggs, a new queen will be raised. The two will both appear in the hive until the new queen is ready to take over the responsibilities.

When Two Coexisting Queens Are Both Injured

In a beehive with two queens, the natural response found in queens is to fight it out, until one of them dies.

If both queens are injured, they will sometimes coexist peacefully. This can trigger two responses:

Beekeepers can either wait until one queen dies or remove both queens to make sure they don’t fight to the death.

Artificial multiple queen hives are becoming more and more common among beekeepers. That is because it allows for increased honey production.

The beekeeper will simply inject a new queen into the hive and hope that she won’t be killed.

Who Controls the Number of Queen Bees in a Hive?

When there are multiple queens in a hive, they don’t just die from natural causes. The bees will take action.

Here’s how queens and workers can control the number of bees in a hive.

The Queen Bee Can Kill Other Queens

When you think of a bee colony, it’s easy to assume one queen lays all the eggs and acts as the female leader.

However, when a new honeybee swarm breaks off from its hive to start a new settlement, several queens can be born.

Experts discovered that when a swarm of honeybees finds itself with more than one queen, the queens fight each other until only one remains. But they only do this, if they know that they have the strength.

Honeybee queens can assess their own strength. They use this to make an informed decision about whether to attack other queens or not. [2]

The Workers Can Kill Excess Queens

At the peak of its population, a single colony can have as many as 80,000 bees.

But as the size of a colony begins to decrease because of a decline in the queen’s reproductive abilities, the workers can raise new queens from larvae.

Similarly, for the sake of the hive, they can also kill excess queen bees.

What Happens When There Is More Than One Queen?

If a colony happens to find itself with multiple queens, these queens can do several things.

Depending on the situation, queens will take different actions:

Related: Why do bees reject a queen?

The Old Queen Will Swarm

When a queen is replaced, or if there are simply too many bees in the hive, she can swarm.

This means, that the queen will fly off with some workers to look for a new place to start a colony.

This is a peaceful way for old queens to be replaced. They get to live.

Superseding: An Overlap of Rulers

Superseding can be used in combination with swarming.

The process of transferring the old queen is called superseding. The old queen is replaced by the new virgin queen after she has matured and emerged from her cell.

If she doesn’t leave, she’ll be killed.

A Fight to the Death

A common response to multiple queens is “queen fighting”. Here, the queens will fight until only one remain.

Most times, one of the new queens will hatch before the rest, making it easy for her to eliminate the competition, while they’re still in the pupae stage.

What Happens if There’s No Queen?

A beehive needs a queen. If there’s no queen, no more workers will be created. This will eventually lead to the death of the colony, as the bees will start dying one by one.

Here’s how bees respond when they find themselves queenless.

Bee colonies have an emergency queen-raising procedure to prevent the extinction of the hive.

When the queen dies, either from natural causes or from being killed by her workers (yes, this happens), honeybees will implement this procedure.

While some people think that queen bees are born the way they are, this is not true. Queen bees are raised as queens. They’re given a special diet and treatment.

The emergency queen raising procedure begins if the worker bees sense that their current queen is nearing or has reached the end of her life cycle.

The undeveloped larvae are placed into queen cells along the edge of the comb. The chosen larvae are then fed a special diet of royal jelly. This special diet triggers the queen traits, that enable them to reproduce.

The Death of the Colony

A colony without a queen will eventually die off.

When a hive doesn’t have a queen, it can take anywhere from a few days to several weeks for the entire population of bees to disappear.

Honeybees live for around 2-6 weeks, hence it may take up to 6 weeks for the entire colony to disappear.

How Does a Bee Become a Queen?

Both worker bees and queen bees come from the same eggs. It’s only later in the process that a regular female bee will be transformed into a queen.

If the workers decide to raise a new queen, they’ll transfer eggs and larvae (no more than three days old) into specially constructed, vertically-hanging.

Here, the chosen brood will be fed “royal jelly”, which is a special diet. For three to four days, she will eat as much as her body mass in royal jelly.

Though the workers will continue to feed her, her growth is no longer limited by how much she can eat. She will have a larger head, thorax, and abdomen than regular bees.

As soon as she emerges, she takes her first flight to release pheromones that signal the workers that there is a new queen and they should accept her.

If the worker bees don’t accept their new queen, they will kill her.

There’s typically only one queen in a beehive, but there can on some special occasions exist more at a time. When there are multiple queens in a colony, it causes fighting that will lead to the death of all but one queen.

Sometimes, when queen bees get old, they will be replaced by younger queens but spared in the process. The old queen will swarm, leaving the hive to make room for the new ruler.

If there’s no queen present in the hive, the workers will raise a new queen by putting larvae in queen cells and feeding them royal jelly.

Can a Bee Hive Have Multiple Queens?

Yes, a beehive can have multiple queens, but this is highly unusual, and usually only seen during superseding or with artificially injected hives.