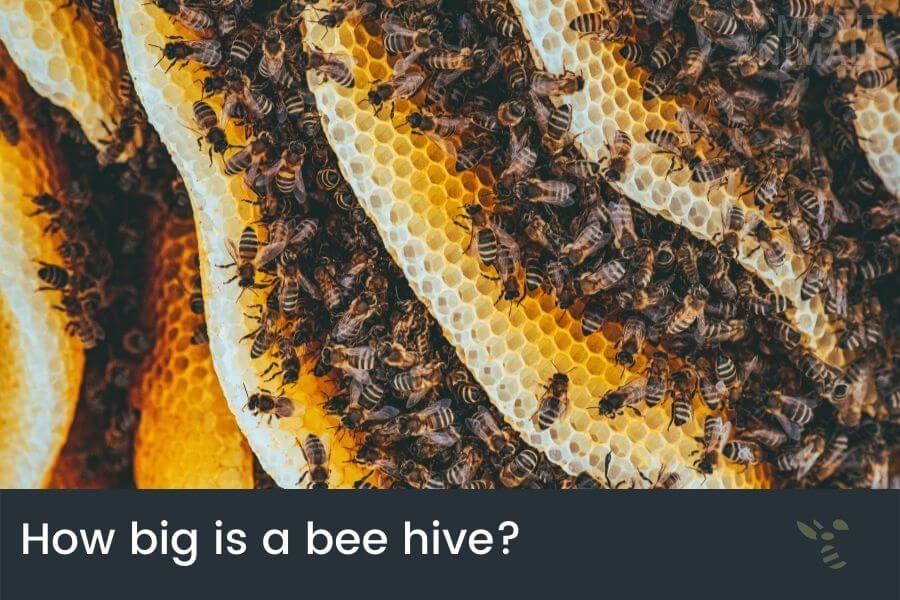 While smaller than your living room, a beehive can hold up to 60,000 bees. A beehive might be small to us, but bees don’t need much space.

Bees work together in their hive to produce delicious honey.

But, there are some things you should keep in mind if you’re looking to start your own apiary.

In this article, we’ll talk more about how much space bees need to grow into a thriving colony, the difference between apiaries and natural hives, and much more.

How much space does a beehive need?

Typically, a beehive will be about 22 inches long x 16 inches wide x 10 inches tall, or 19 ⅞ inches long, 16 ¼ inches wide, and 9 ⅝ inches tall (you may find other sizes from different manufacturers).

You should leave at least five feet of space in all directions around the hive (1,5 meters). For multiple beehives, they should be at least three feet apart (1 meter).

Bees generally aren’t picky about their living conditions, but they need space around their hive.

How big should a beehive be?

The size of your beehive should reflect how many bees you intend to keep. Many beekeepers choose to go for medium-sized boxes though, as the deep hive body can get very heavy when filled up with bees.

A beehive can vary from minimal backyard constructions of stacked boxes to massive structures in commercial apiaries which house tens of thousands of honey-producing bees.

Beehive size is measured in how many “frames” or squares there are inside the beehive box. A beehive with a standard deep hive body is about 20 inches long, 16 inches wide, and 10 inches tall with 10 frames for a total of 60.000 bees.

The National Beehivestandard beehive is specifically designed to house frames with standard measurements of 14” wide and 8 ½” tall.

The most popular beehive box is the Langstroth hive. A traditional box has the following dimensions: 19 ⅞ inches long, 16” wide, and can get up to 22” tall. They do have multiple sizes though.

How big is a natural beehive?

Most natural beehives are about the size of a shoebox, which is how the artificial hives got their name.

They can be much bigger than this, such as how big is a natural beehive might house bumblebees. These hives can reach up to two feet (60 cm) in length and width and an inch and a half (4 cm) deep.

Beehives built by honey bees may be smaller than this, and those made by bumblebees will often grow much larger.

The queen bee inside these hives also determines how large they will end up being – the bigger she is, and the more eggs she lays, the bigger her hive will become.

How big is an artificial beehive?

Artificial beehives (apiaries) differ in size depending on how many hives or boxes you have, the size of the hives, and other factors. For a simple one-box setup, you can have upwards of 60.000 bees.

Before setting up your own apiary, make sure to familiarize yourself with any local laws there might be on beekeeping.

How small can a beehive be?

A beehive can get quite small. If we’re talking about the box size, the Langstroth box (which is most commonly used) can be about 19 inches long, 14 inches wide, and 5 inches tall.

There’s also a type of beekeeper called “queen breeder”, where they specialize in breeding queens. For this, you can use a smaller box.

While the average beekeeper needs a box for their beehive that is 19 inches in length, 14 inches in width, and 5 inches in height (depth), the queen breeder needs a hive that measures no more significant than 10.5 by 7.5 by 5.5 inches.

This box has nearly three times more space between each frame for the bees to build their comb.

Queen breeders typically keep small colonies of fewer than 25,000 bees, giving them room to control varroa mites and other pests while still producing enough honey to feed themselves.

Smaller hives also take up less room on a beekeeper’s property and work better if the beekeeper ever has to move them from one location to another.

How big can a beehive get?

Beehives can get extremely big, but there is a cap. Most commercial beekeepers won’t grow a single hive bigger than 100,000 bees, as it’s easier to control smaller hives.

In theory, a beehive could grow to contain more than a million bees, though this would be difficult to achieve.

Beehives can grow in size for several reasons, including:

So how big can a beehive get?

It will likely depend on what size it started as, but there’s no exact number for how big or small it can be.

How tall can a beehive get?

The answer is pretty tall, but you don’t want the hive to be too tall, as it will get unmanageable. The best beehive stand height is about 18-22 inches.

It’s high enough to keep it off the ground, as well as reduce pest and moisture, but small enough for you the manage it easily, and for easy access into the hive.

How many bees are in a beehive?

Of course, the number of bees in a beehive fluctuates depending on the season, available food sources, and other factors. During the winter, bees sometimes slow down reproduction, which can cause the population of the hive to dive a little.

You can also get smaller boxes, that will only contain about 25,000 bees.

One thing to notice is, that the size of the hive also affects how often bees will swarm.

The smaller the box, the less space for the bees – and the sooner they’ll reach their limit. When this happens, the bees may raise a new queen, while the old queen will fly off to find another place to nest.

How many bees fit in a standard beehive?

It should be noted, that this is at maximum capacity – your bees may not reach those numbers before swarming.

A strong queen can lay up to 3,000 eggs per day. At first, this will be a slow process though. For most hives, the bees will grow into their hive in a couple of months.

For a standard hive, assuming there’s a strong honey flow and that they have plenty of access to nectar, they can fill a honey super in about 1 week, sometimes even faster.

An average colony may take between 2 to 4 weeks, while a weaker colony can take up to 2 months.

Biggest beehives in the world

There are five of the biggest beehives in the world that have ever been recorded.

The first is located on a bee farm in Eumundi, Australia, just north of Brisbane. It was measured at being two stories tall and estimated to hold between 200,000-500,000 bees total.

This beehive is so big it can produce enough honey for 2,500 people every year.

The second record-breaking hive was discovered on February 19th, 2012, by Tracey Ruhfus under some trees near her home in Wolvi, Queensland, Australia.

This hive was discovered when it started raining inside one of the homes, and experts found the cause to be this massive colony living inside its walls.

Experts found the fourth-biggest beehive underneath an acacia tree in Nieheim, Germany (a city of around 7800 people). The 100 kg (about 220 lbs) giant had about 4 million bees living within it at any given time, with some estimates placing it three times during summer months!

Finally, the fifth-largest beehive ever recorded was located by BBC reporter Tim Muffet when he toured the headquarters of Rentokil in Wotton-under-Edge, Gloucestershire, England.

The largest traditional bee yard can be found at Morocco’s Inzerki Apiary. This apiary is nearly 1,000 meters tall and made out of mud, wood, palm, and braided reeds. [2]

The nearby population mainly consists of beekeepers (250 of them), who each have 15-20 hives within the structure. With around 3,700 hives, the apiary contains thousands upon thousands of bees (the Saharan yellow bee).

The maximum capacity of the apiary has reached upwards of 150 million bees.

So what does that mean for you? Well, it means that the size of your beehive can vary depending on where you live. It also means that there are different beekeeping techniques to ensure your hive is at its optimum height.

But don’t worry about all these details! We’ll take care of everything for you. Do you want to learn even more about bees? Check out a couple more of our posts today!

Artificial man-made beehives are also called apiaries. These will usually consist of boxes with frames.

Can I have a beehive in my backyard?

Not without a permit (and good reasons for wanting one). If you live in an area that has enough flowers, trees, or weeds to support honeybees, you may be able to keep your very own bees.

How much land does a beehive need?

A beehive needs about 5 feet of space on all sides, for a total of 25 square feet. If you’re keeping multiple hives, you can cut this down to 3 feet on all sides (9 square feet).

How Big Is a Brood Box?