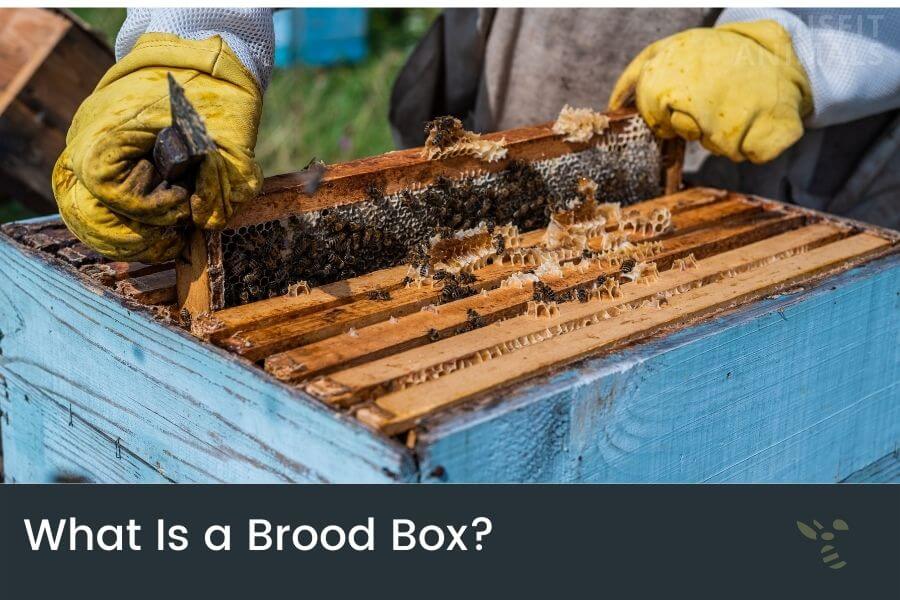 A brood box is used to house the queen bee, and this is where she lays her eggs. Depending on the size of a beehive, there’ll either be one or two brood boxes. The brood box is separated from the supers.

The brood box is an important part of beekeeping supplies. This is where the queen lays her eggs, as well as where she lives.

A common question from new beekeepers is whether to use one or two brood boxes. The answer is, it depends.

In this article, we’ll dive deeper into the use of brood boxes, how many you need, and why it’s important to use brood boxes correctly.

What Is a Brood Box?

A brood box is a single-layer box that houses the queen bee and her eggs. It’ll typically be located at the bottom of the stack, separated from the honey supers with a thin screen.

The amount of brood boxes a beekeeper uses is determined by what type of honey bee he or she keeps, the size of the colony, and even the time of year.

Brood boxes are important, as this is where the queen lays her eggs. Without a brood box, there’ll be no egg-laying, and hence no colony.

A beehive stack may consist of:

How Big Is a Brood Box?

The standard industry dimensions for a deep hive body are 19 ⅞” in length, 16 ¼” wide, and 9 ⅝” in height. You should make sure to pick a brood box (hive body) that fits the rest of your setup.

There are both regular, half, and double-sized brood boxes, depending on your need.

Some beekeepers prefer smaller brood boxes for their bees, while others use larger ones. The size of the brood box you choose is up to you and your preferences.

Supers, short for “superstructure”, are the boxes placed on top of the brood chamber (brood box) to store surplus, honey.

In other words, the super is any additional boxes placed on top of the “year-round” structure (the part of the hive that’s left out all year).

Supers are most often placed on top of the hive in times of increased nectar collection, where the nectar flow is strong. This results in a surplus of honey. The supers are added to avoid the beehive becoming overcrowded, which can result in swarming.

It’s common for beekeepers to refer to medium boxes as supers, even if they aren’t used for honey.

Honey supers are placed on top of the beehive, as bees will store honey in honeycomb as far up as possible. This way, beekeepers can easily access the honey, without having to remove other parts of the beehive.

How Big Is a Super?

Langstroth hives typically use supers that are 9 ⅝” wide and 18 ¾” long. Commercial supers for top bar hives can be made in a variety of sizes, but are typically about 18” long and 10 ½” wide.

The depth of the super will also vary depending on the hive it is being used in. Langstroth hives typically use supers that are either 6 or 8 ½” inches deep.

Key Differences Between a Super and a Brood Box

It’s easy to get confused about supers and the brood box, especially if you aren’t a beekeeper. While both have their purposes, there are key differences between the two that every beekeeper should be aware of.

The main difference between brood boxes and supers is their use. Brood boxes are used to house the queen, and for the queen to lay eggs in, while a super is used to store honey.

A brood box is essentially what it sounds like. It’s a container in which a beekeeper houses their queen bee and brood.

Meanwhile, a super is what a beekeeper places on top of a brood box in order to add more storage space for honey.

One or Two Brood Boxes: What Do You Need?

Most new beekeepers only need a single brood box to start out with. If the bees start running out of space, you can add another one, or simply add a half.

There’s a general agreement across the world, that using one or two brood boxes is optimal. Using three or more may hurt the bees more than it benefits them. In this case, it’s better to split a large hive into two hives.

If you have a larger hive, you’ll most likely need two brood boxes, as there will be a lot of brood. If the hive is new, starting out with a single brood box is enough.

When starting out, it might be a good idea to buy one brood box and see how your hive does. You can always add another brood box if you need it.

When Should You Add Another Brood Box?

You should add another brood box when the bees are running out of space.

There are a few benefits of having two brood boxes.

Adding another brood box gives them more room to grow and helps to prevent swarming.

It’s not always smart to add a second brood box.

While the queen needs room to lay eggs, too much room may be bad for you. Queens lay on average about 1,200 to 1,400 eggs a day, which takes up 13 to 14 frames of space. Any excess space will be used to store honey, which you won’t be able to extract.

Related: How Much Space Do Bees Need?

When your colony gets too large for its current hive, you can add a small brood box to the bottom of the hive to create more space. The small brood box will add an extra frame or two of space for the bees to store honey and raise the brood.

This way, you don’t have to add a full brood box. You can simply add “half” a brood box.

Adding a small brood box is a great way to give your bees more space and keep your colony healthy.

Brood boxes are an integral part of many beehives. They’re essential for growth, and for egg-laying.

When adding a brood box, here are several things you need to consider: climate, hive conditions, queen reproduction, and your harvesting schedule.

Climate is extremely important when it comes to beekeeping, especially adding a brood box.

Warmer weather will stimulate the bees to be more active and productive, while colder weather will keep them inside the hive and slow down honey production.

Depending on your climate, you’ll need to approach brood boxes differently.

If you live in a colder climate, you need to keep an eye on the brood box during the springtime. This is when the queen will be laying the most eggs, as she has to repopulate the colony. You’ll also have to remove it when activity levels drop again in late summer/early spring.

If you live in a warmer climate, or somewhere the weather isn’t changing much, you may get away with adding more space and leaving it there all year round.

When adding a brood box to an already established hive, it is important to consider the condition of the hive before you add more space.

Some beekeepers will stack supers and brood champers without much concern for what’s going on with the hive.

It’s important not to add too much space. If the bees aren’t utilizing the current space they’ve got, don’t add more.

Bees like their hive warm (around 90°F, 35°C). If there’s too much space, it’ll take more energy to keep it warm, hence slowing down honey production and overall efficiency.

How Fast the Queen Reproduces

Make sure your queen can keep up. The speed at which the queen reproduces depends on her age. The older the queen, the slower she’ll lay eggs.

Hence, an older queen may just be able to keep up with a single brood box, while a younger queen may be able to fill up two brood boxes during a 23-day cycle (it takes 21 days for bees to hatch, and 2 days to rebuild honeycomb).

Depending on the age of your queen, you may have to add or subtract brood boxes along the way.

How Often and Much You Harvest

If you don’t have time to harvest as soon as the supers have filled up with honey, the bees will begin to store honey in the brood box. Hence, your harvesting schedule plays a role in the number of brood boxes needed.

If you can, harvest the honey when possible. If not, you may have to consider adding another brood box.

When a bee colony becomes too crowded, the bees will swarm.

Swarming is the process in which the queen bee leaves the hive with a swarm of worker bees. They do this to make room for the rest of the colony, and to create a new hive elsewhere.

If you want to prevent your bee colony from swarming, you can introduce another brood box.

Depending on your hive size, climate, time of year, and other factors, you may want to use one or two brood boxes.

There’s a general consensus between beekeepers, that using any more than this will cause more harm than good for the hive.