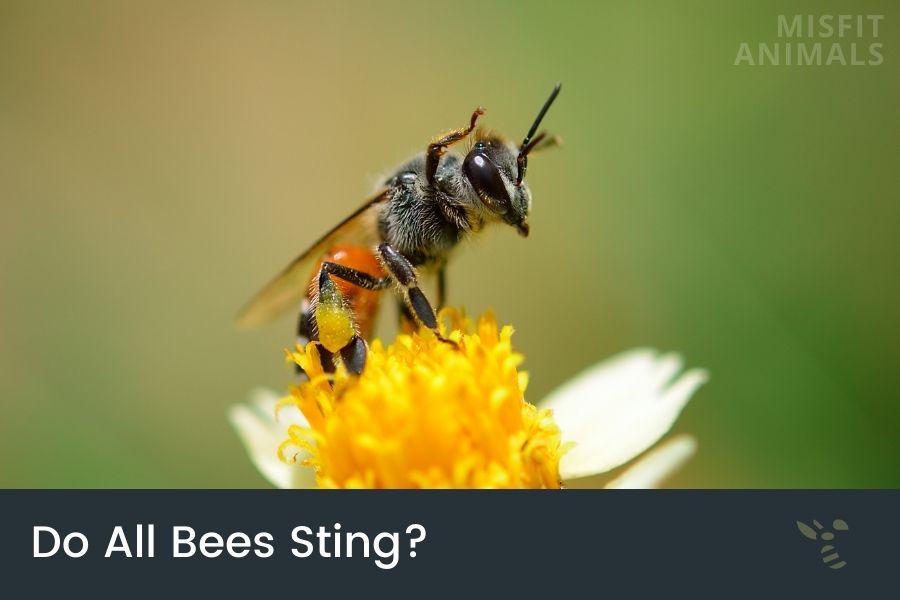 Not all bees can sting. About 500 bees belong to the species of meliponines, otherwise known as stingless bees. These bees are born without stingers.

While bees can sting, they try not to. Some bees even die if they sting, meaning they only do so in extreme cases when threatened.

In this article, we’ll take a closer look at stinging, as well as what bees stings.

Not All Bees Sting

While many people are afraid of being stung by bees, not all bees can sting. Stingless bees are born without stingers. There are about 500 of these species of bees.

Apart from stingless bees, only female bees can sting, meaning all male bees are unable to.

Bees that don’t sting can however bite you. Most stingless bees have developed strong mandibles, as their jaws are their only self-defense.

Stingless bees, or meliponines, are a type of bee that does not have a stinger. They are found in the tropics and subtropics. There are about 500 species of stingless bees. [1]

Stingless bees make their nests in trees or in the ground. They make honey and wax, and they also pollinate flowers.

While these bees don’t have stingers, they can still bite. Bee bites can be just as painful as a sting, as bees still inject venom into the wound when biting. [2]

Male bees (drones) can’t sting. The truth of the matter is that male bees don’t even have stingers. The features of drones that look like a stinger are actually part of their reproductive system.

The only bee that can sting you is a female bee. Females have a stinger that is connected to a venom gland.

When she stings something, venom is injected into the victim.

Worker honey bees, female bees unable to reproduce, have barbed stingers. When they sting, they die as their stinger is ripped off of their body.

Do All Bumble Bee Species Sting?

All bumblebee species can sting, but only the female bumblebees have stingers. Just like with other bee species, drones don’t have a stinger, as their reproductive organ fills out the space instead.

Bumblebees don’t have barbs on their stingers, meaning they can sting multiple times, like the queen honey bee.

Bumblebees are the friendlies of all bees, and they’re typically very calm, even around humans. As long as they’re not threatened, or otherwise agitated, they won’t sting.

When bumblebees bite, they also won’t do much damage, as their mandibles are very weak (compared to other species).

Do All Honey Bees Sting?

The simple answer to this question is no, not all honeybees sting. Only female honeybees have the ability to sting, and even then, they can only do so if they feel threatened.

The queen bee can sting repeatedly, while the worker bees can only sting once.

There are also stingless honey bees, which are honey bees without stingers. Both males and females of these species are unable to sting.

Do All Solitary Bees Sting?

Solitary bees, which make up about 90% of bee species, do not typically sting unless they are provoked. In fact, stings from these bees are quite rare.

They may try to sting or bite an intruder, but they generally only attempt to sting in defense (e.g. if someone accidentally steps on them).

Even when agitated, the vast majority of solitary bee species rarely use their stinger.

Do All Bees Die When They Sting?

It has long been believed that when a bee stings it immediately dies. While this is true for some bees, it’s not the case for all of them.

Most bees, and wasps, have smooth stingers, meaning they don’t die when they sting. Honey bees are the only bees to die when stinging.

In honey bees, the workers have barbed stingers, meaning they’ll stick to the flesh of the bee’s target.

Their stinger is connected to the abdomen of the bee by muscles and tubes. After stinging, it loses its stinger and the muscles pull away from the abdomen. The stinger will be left in the attacked person or animal.

However, honey bee queens can sting repeatedly without dying. [1]

Honey bee queens can do this because they have a smooth stinger.

How to Avoid Bee Stings

If you want to avoid being stung by bees, here’s what to do: handle bees with care, stay calm when they’re around you, and wear protective gear.

When you are outside, be aware of your surroundings. If you see a bee, simply avoid it. If it’s flying towards you, or lands on you, handle it with care.

Bees only sting when they’re threatened. If you don’t threaten the bees, nothing will happen to you (in most cases).

Staying calm is the best way to avoid bee stings. By staying calm, moving slowly, and being silent, there’s a smaller chance of agitating the bees. If they don’t become agitated, they will be less likely to sting you.

When it comes to bee stings, the best way to avoid them is to wear protection.

When beekeepers handle their bees, they often wear a beekeeping suit. These are made to cover their entire bodies, including heads, hands, and feet.

By wearing gloves, long pants, a long-sleeved shirt, and a hat, you can help protect yourself from these stinging insects.

If you do get stung, remain calm and avoid panicking. If you start running, making sudden movements, and screaming, the bees will feel threatened, which can result in additional stinging.

The calmer you remain, the less likely you will be stung by a bee.

Related: Do beekeepers get stung often?

Not all bees can sting. Stingless bees are bees without stingers, meaning they can’t sting. There are about 500 species of stingless bees. Amongst the species that do sting, only female bees have stingers.

Female bees, including both workers and queens, are the ones that sting. Male bees, also called drones, have reproductive organs where the stinger is otherwise located.

Most worker bees have barbed stingers, meaning they can only sting once. Queen bees, on the other hand, have smooth stingers, which they can use multiple times.

What Kind of Bees Do Not Sting?

Stingless bees and male bees don’t sting, as they don’t have stingers.

While bumblebees can sting, they very rarely do so. They’re calm, docile, and gentle creatures. They typically don’t show aggression towards humans, unless they’re threatened.

Do Male Bees Have Stingers?

No, male bees don’t have stingers. Instead, their reproductive organs are located where female bees’ stingers are. Hence, drones can’t sting.

Do Bees Sting at Night?

Bees are typically asleep at night, meaning they don’t sting. However, there are nocturnal bees. Bees will also get up and attack if something is threatening them at night.

Related: Do bees sting at night?