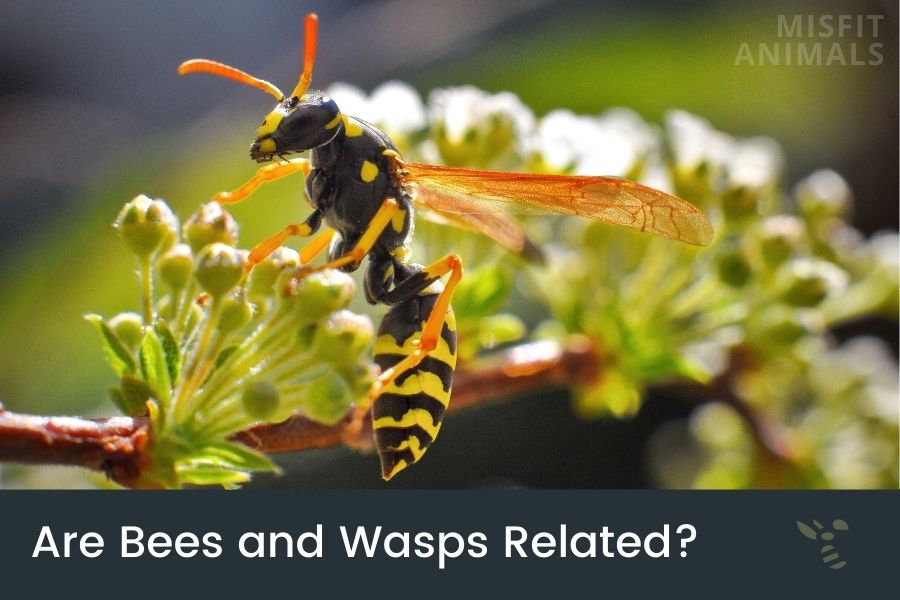 Bees and wasps are very related, as they’re both members of the insect order Hymenoptera, along with ants.

Bees and wasps are very different, both in diet, behavior, and their daily activities.

But there are some similarities as well, as the two are closely related.

In this article, we’ll take a closer look at bees vs. wasps, their differences and similarities, as well as how you can tell the two apart.

Are Bees and Wasps Related?

Insects in the Order Hymenoptera

The bees, wasps, and sawflies are winged insects. The ichneumonids, gall-inducing insects, braconid wasps, and chalcid wasps are all parasitic on other insects.

Similarities Between Bees and Wasps

There are many similarities between bees and wasps. The bees and the social wasps (which include hornets, yellow jackets, and paper wasps) both belong to the order Hymenoptera. This means that they share a common ancestor and have many similar characteristics including:

The two animals also look very alike, which is why they’re often mistaken for each other.

Wasps and bees are often mistaken, as they are similar in size, have the same color scheme, and sometimes also have the same body shape.

Generally, wasps have more pointy abdomens, while bees have a rounder shape.

Pollination is a vital part of the life cycle of plants. It allows them to produce offspring, and in turn, helps to ensure the continued health of our planet’s ecosystems. Pollinators are thus essential for the production of food.

About three-quarters of the world’s crops are dependent on pollinators such as bees, wasps, and butterflies.

One similarity between wasps and bees is, that they’re both pollinators. Bees pollinate when they collect nectar and pollen, while wasps pollinate when looking for nectar.

There are many different types of bees and wasps, and they all play an important role in pollination.

Both insects collect nectar for food. Nectar is a sweet, sugary substance, that provides them with plenty of energy.

When a bee or wasp visits a flower, it brushes against the stamens (the pollen-producing part of the flower) and picks up pollen on its body. It then transfers this pollen to other flowers, helping to fertilize them.

Here are a few examples of bees that look like wasps, and one example of the opposite.

Sweat bees are typically very small in size and they have metallic coloring, which makes them look like wasps. However, what separates sweat bees from paper wasps is that sweat bees nest differently.

Sweat bees typically build their nests near the ground in areas such as meadows, gardens, and fields.

These bees are large in size and they have a black and yellow color on their bodies, which makes them resemble wasps.

Carpenter bees live in nests as wasps do – instead, they seek out old or rotting logs to build their nests in.

One of the most famous examples of a bee mimicking a wasp is Gooden’s Nomad Bee.

This bee is mostly black, with yellow markings on its abdomen. It also has a band of white around its neck. Its abdomen is more pointy than many other types of bees, which all adds up to a wasp-looking appearance.

Yellowjackets are often mistaken for bees, due to their bee-like colors. They’re black with yellow stripes on their abdomen.

The difference between yellow jackets and bees is, that yellow jackets don’t have hair. Their body is completely smooth, whereas bees have fine hairs all over.

Bees and wasps are both members of the Hymenoptera order, which also includes ants. They share a lot of common characteristics, but there are some distinct behavioral differences between them.

Bees are social insects that live in colonies, while most species of wasps are solitary, meaning they live alone.

Some bees are also solitary, and some wasps live in colonies.

While most wasps are solitary, some are also eusocial, living in larger colonies. They have queens, drones, and sterile workers, just like bees. The difference is, they can have several queens per colony, whereas bees only have one queen.

Related: How Many Queen Bees Are in a Hive?

Bees and wasps also differ in how they feed themselves. Bees collect nectar from flowers and convert it to honey, which is stored as food for the winter months. Wasps forage for nectar or hunt for honey and meat.

Wasps, on the other hand, do not make honey. Adult wasps feed on nectar or hunt for honey in bee nests. They also eat meat.

Wasps are effective hunters, with large stingers. They can paralyze their prey, whereafter they’ll carry it back to the nest, or eat it on the spot. Wasps also infiltrate bee nests in the search for honey.

Where bees get their proteins from pollen, wasps get protein from other insects, such as grasshoppers.

Finally, bees and wasps differ in their reaction to threats. Bees can swarm an intruder and attack it but aren’t as inclined to do so. Wasps are more likely to attack if they feel threatened.

Bees and wasps have several behavioral differences. The one that most people think about is aggression.

Bees are generally more docile, less inclined to attack, while wasps are aggressive creatures, always on the hunt for prey.

This difference comes down to their diet. Bees live off of flowers and prefer to peacefully collect the nectar needed to make honey. Wasps also eat nectar but are very fond of meat as well. [1]

Bees are foragers, while wasps are predators.

A predator is an animal that preys on other animals. These animals typically use their sharp teeth, claws, or strong jaws to bite or slash into their prey.

Predators are often larger than the prey they eat, and they usually have keen senses that allow them to find and catch prey.

Many predatory animals also use venom or poison to neutralize their prey.

Foragers collect food and nutrition from nature, such as flowers, vegetables, fruit, and similar. These types of animals are less aggressive and work as prey for predators.

Bees and wasps aren’t always easily identified. There are many species of both insects, and many look alike.

Here’s how to tell the difference between bees and wasps.

Wasp bodies are more slender than those of bees, and their abdomens are smooth and hairless. Their coloring can also vary, but many species are brightly colored with black, yellow, and red markings.

Bees are generally rounder in shape than wasps, and their abdomens are covered in dense fur. Their coloring can vary, but most species have yellow and black stripes or markings. Honey bees are the best-known type of bee, and they play an important role in pollination.

Bees and wasps are well-known for their nesting behavior. Both social and solitary species build nests of various shapes and sizes in order to protect their young.

The most common type of wasp nest is made from chewed-up wood fibers. They chew up wood and mix it with saliva to create a sticky substance that holds the nest together [3].

Bees make their hives out of beeswax, which they produce themselves. Bees secrete beeswax from wax glands and use it to build the nest, as well as the honeycomb.

Bees and wasps are often mistaken for each other. This is due to their similar shape, size, and color. Bees and wasps share some traits, while there are also many differences, such as their diet, aggression, and foraging behavior.