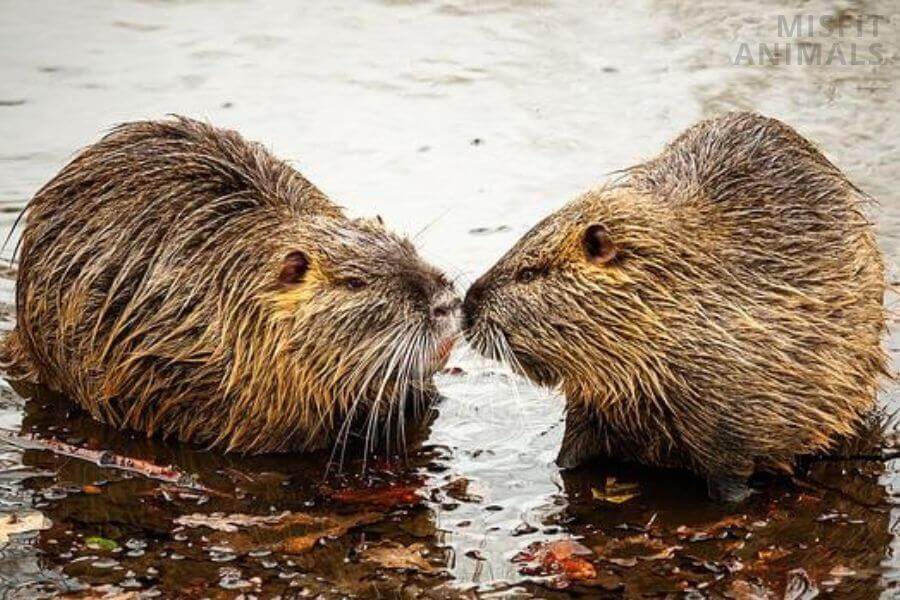 Beavers mate for life and do so once per year. The mating season lasts for two months, from January to March. The female beaver is in heat for 12 hours at a time, and the male stays close to her during this time.

Did you know that beavers mate for life? Or that they can have up to six babies at a time?

Beavers are fascinating creatures, and their reproductive habits are one of the many interesting things about them.

Contrary to other rodents, they don’t mate a lot. Rats, for example, reproduce incredibly fast. But not beavers.

Beavers mate for life, and they mate once per year. A single litter consists of one to six kits, that the female and male care for together after birth.

Beavers form mating pairs that stay together their entire lives. They live in lodges, and each lodge often consists of a monogamous couple and their offspring.[1].

Once a pair has bonded, they will stay together until one of them dies. The female beaver will have one litter of kits per year.

The gestation period for beavers is about 105 days. This means that the female beaver is pregnant for just over three months before giving birth.

No, beavers do not lay eggs. They are mammals, and mammals give birth to live young.

Beavers are rodents and rodents are mammals. As the large majority of mammals, beavers give birth to live young, which then feed on their mother’s milk.

There are only five mammals that lay eggs.

One of the only five mammal species that lay eggs rather than give birth to live young is the monotreme platypus, which is exclusively found in Australia.

Four different echidna species are the other egg-laying animals.

How Often Do Beavers Mate?

Beavers mate once a year between January and March. The female gives birth to a single litter consisting of one to six kits.

Based on observations of captive beavers, it is thought that they may mate anywhere from once a year to once every three years.

It is difficult to say for sure as beavers in the wild are rarely observed.

What is known is that beaver mating usually takes place in the winter months[2]. After a female beaver gives birth to her kits, she will not mate again that year.

As they mate between January and March, the kits are born between April and June.

How Many Babies Do Beavers Have?

Beavers typically have one to six babies, also called kits, per year. The female will give birth once a year, meaning they can have up to one litter of kits per year. The number of kits in a litter varies from year to year.

Beavers give birth once a year. The kits live with their parents until they are old enough to take care of themselves.

As baby beavers set off on their own after two years, the newborn kits reside in the lodge with their parents and siblings born the previous year.

Beaver kits are born precocial. They weigh between six and eight ounces (170-227 grams) at birth. They begin to swim within the initial 24 hours of birth.

Kits are weaned from their mother’s milk at around three months of age, but they remain with their parents and siblings until the following spring.

At birth, beaver kits are helpless. Their mother and father take care of them until they are old enough to fend for themselves. Once they reach maturity, beavers generally live on their own.

What Is a Baby Beaver Called?

Beaver babies are known as kits.

Typically, Eurasian kits are weaned six weeks after birth. The gestation period for American beavers is approximately 105 to 107 days.[3]

Beaver kits are born precocial, meaning they are born with their eyes open and fully furred. They are able to walk and swim soon after birth.

Kits stay with their parents for the first two years of their life, learning how to build dams and lodges.

When Do Beavers Mate?

Beavers mate in the winter, between January and March. They reach sexual maturity between the ages of two and three. Females have one litter of kits each year between April and June, and gestation lasts about three months.

Beaver take part in mating during a small window each year, often between January and March. The female is in heat for 12 hours at a time, which is why her life partner stays close to her during this time.

During mating season, male beavers will compete for the attention of a female. The victor will mate with the female, and the pair will usually stay together for life.

After mating, the female will build a nest in which to have her young.

At What Age Can a Female Beaver Get Pregnant?

Beavers reach sexual maturity later than many other rodents. It takes a female beaver three years to be able to mate.

Male beavers can reach maturity earlier than this, when they reach about two years of age at the earliest.

How Do Beavers Select Their Mate?

When a female beaver is ready to mate, she will release pheromones near scent mounds in the woods. Male beavers follow her scent until they find her. The two beavers then mate.

Beavers usually mate for life. But, if one of the beavers dies, the other will find a new mate.

To find a mate, the female beaver releases pheromones[4] when she is ready. Male beavers check these mounds frequently during mating season, to make sure they pick up on mature females.

The male beaver will then engage in a courtship ritual with the female. Once the female beaver has decided on a mate, she will allow him to enter her den. The two will then mate.

Once a compatible mating pair has been established, they’ll stay together.

Do Beavers Mate for Life?

Yes, beavers mate for life. These monogamous creatures are often seen as a symbol of love and commitment, due to their lifelong pairings. Beavers mate with the same partner for several years, and sometimes even for the duration of their lives.

Interestingly, beavers have been known to “divorce” if they are unable to have offspring with their current mate.

In these cases, the beavers will find new partners in order to try and successfully produce young. Once a beaver has found a mate that it is compatible with, it will usually stick with that partner for life.

How Long Are Female Beavers Pregnant?

The gestation period between Eurasian and American beavers differs mainly due to size. The Eurasian beaver is smaller than the American beaver, so it takes less time for the baby to develop inside the mother’s body.

The length of the pregnancy also depends on the number of babies that the mother is carrying.

If the mother is carrying more than one baby, the pregnancy will be longer than if she is carrying only one baby.

Does a Male Beaver Raise Their Babies?

Both the male and the female beaver take care of their offspring.

The female beaver will usually give birth to two or three kits, which are baby beavers. The kits are born with their eyes open, almost ready to swim, but they still need help from their parents.

Both the mother and father beaver will help to take care of the kits.

The father beaver will often bring food to the mother while the female nurses the kits. He will also help to build the lodge where the family lives and to defend the family from predators.

Beavers mate for life and have a gestation period of 107 to 128 days, depending on the species. The female gives birth to between one and six babies, but only gives birth to one litter per year.