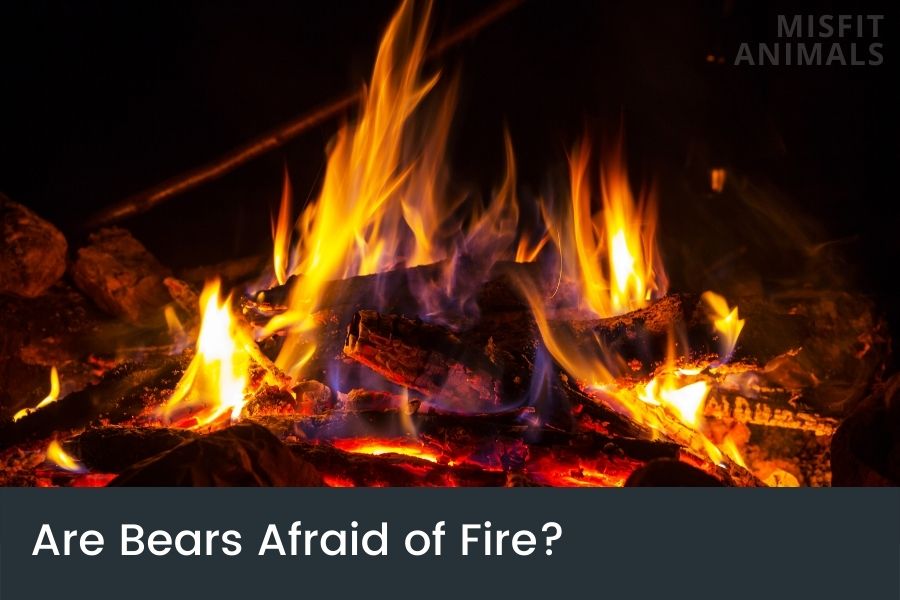 Bears aren’t scared of fire. Using a campfire to keep them away doesn’t seem to work. While they’re not particularly fond of fire and smoke, it doesn’t deter them either.

Bears are one of the most feared animals in the world. They are large, powerful, and can be very dangerous.

But what are bears afraid of? Are they afraid of fire? Smoke? Or something else?

In this article, we will discuss whether bears are afraid of fire, and how you can use this information to protect yourself if camping in bear territory.

Are Bears Afraid of Fire?

Bears are intelligent animals and understand that fires can be dangerous, but they are not so easily scared off by them.

Many people, mistakenly, think that keeping a campfire going will keep bears away. This is not true. A campfire, unfortunately, can’t protect you from bear attacks.

If you’re using it to cook food, it may just have the opposite effect, attracting bears instead of scaring them away.

So, while bears are not inherently afraid of fire, they are certainly aware of its dangers.

Are Bears Attracted to Fire?

Yes, bears are attracted to fire. They are neither scared of, nor frightened by, fire, but drawn to it. Bears are very curious animals and will often approach a fire if they see one.

There are several reasons why bears are drawn to fires.

Are Bears Attracted to Smoke?

While bears are attracted to smells and odors, smoke doesn’t seem to affect them. Bears do not seem to be attracted by the smell of smoke alone.

While there are other reasons to avoid using campfires when hiking or camping in bear country, the scent of smoke won’t attract them directly.

Are Bears Attracted to Light?

Bears aren’t attracted to light. They don’t associate lights with bad or good. Hence, light doesn’t draw them in, but it also doesn’t scare them away.

While bears may keep away from light and noises from humans at first, they quickly learn that light isn’t something to be scared of. If exposed to flashlights or floodlights enough times, they’ll be indifferent to them.

There are several reasons why using lights to deter bears won’t work:

In other words, it’s better to find another way to keep bears away.

Can You Keep Bears Away With a Campfire?

Bears don’t seem to mind campfires[2]. They have been known to approach people sitting by campfires eating meals. Some bears are curious and are drawn to campfires, while others are aggressive.

When a bear approaches you or your campsite, it is often because the animal has become accustomed to people and therefore not afraid of them.

The smell and sight of food (or anything that looks like food) including coolers, cooking pots, dishes and utensils draw bears in closer for a look. Bears may even approach humans when they are sleeping if there is any sign of food nearby.

Here’s what to do, if you want to keep bears away while camping:

What Are Bears Afraid Of?

Bears are generally not afraid of many things, but here’s what they tend to avoid:

Bears Are Wary of Humans

Bears tend to keep their distance from humans, specifically smaller bears (such as black bears). However, bears are curious by nature and may come closer to humans if they are rewarded with food.

Bears are also intelligent animals; once a bear realizes that humans are a good source of food, it will seek out people as a means of feeding itself.

This is how most nuisance bears are created.

Bears Are Scared of Dogs

Bears have an innate fear of dogs, as they’re aware that wolves (dog-like carnivores) can steal their cubs.

Dogs are also known to attack bears. There are several incidents that started out with an aggressive dog chasing a bear.

Hence, if you’re hiking with your dog, make sure it’s either well-trained or on a leash, in case you come across a bear.

Related: Are Bears Afraid of Dogs?

Black bears aren’t as dominant as grizzly bears or polar bears. They are scared by loud noises, such as yelling.

Bear experts say you should always make noise while hiking in bear country so the animals know you are coming and can avoid you if they want to[3]. You should talk loudly with your friends so you sound like a bigger group. Bear bells are another great way to let wildlife know that humans are near.

How Do You Escape a Bear Attack?

When you are in the wild and you encounter a bear, the first thing you should do is stay calm. Bears are not naturally aggressive animals and are more likely to avoid confrontations than attack.[4]

To escape a bear, you have to act according to the species you encounter. Not all bears are the same, hence your response should be different.

Here’s how to get away from a bear encounter.

Related: Can You Outrun a Bear to Escape an Attack?

Back Away From Grizzly Bears

When you are in the presence of grizzly bears, it is important to remember to always back away. Do not make any sudden movements and try to remain calm.

If you have a backpack or anything else that you can use as a shield, do so in case of an attack. Make sure to keep your distance and never turn your back on the bear.

If necessary, use bear spray.

Be Dominant Towards Black Bears

Black bears are submissive – or at least more submissive than grizzly bears. Hence, your best bet is to scare it away.

Bears are not afraid of fire. They may even be attracted to it, especially if you’re cooking with the fire. Bears have an incredible sense of smell, and can easily smell your food from afar.

To keep bears away, keep your campsite clean. A campfire won’t do the trick, but keeping your camp free of attractants may suffice.