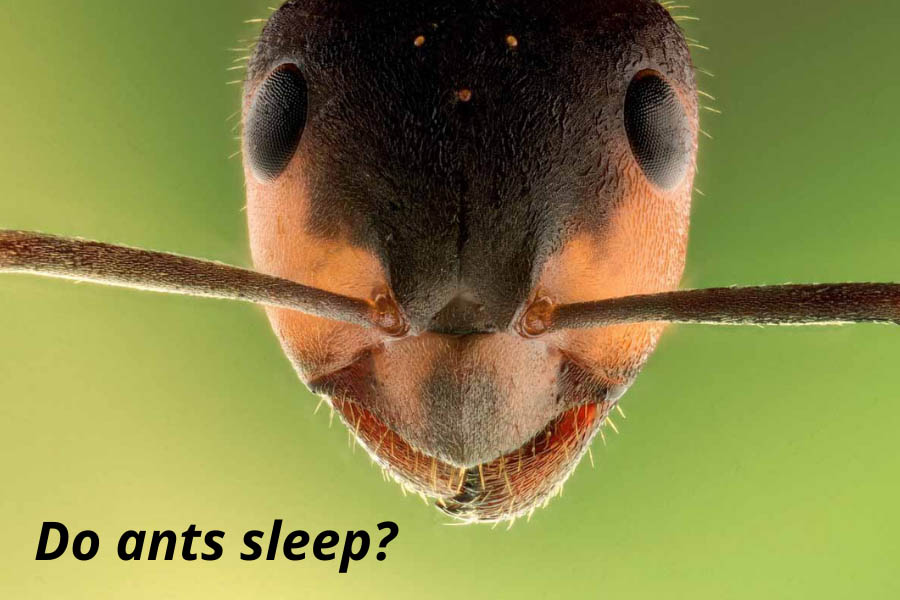 Yes, ants sleep, but they take a very different approach compared to us humans. Ants sleep anywhere from 3.5 to 5 hours per day, but not all at once. They take shorter naps instead of one big one.

There are some queens that may only need 2-4 hours of sleep each night because their responsibilities differ from that of a worker ant, but they will typically sleep at least the same as the workers.

In this blog post, we will discuss a few different pieces of information about the sleep patterns we see in ants.

The answer is yes, ants do indeed sleep [1]. In fact, all animals require some type of rest from time to time to survive and as well as do their daily activities at a high-level performance.

Ants are no different in this regard.

How Many Hours Do Ants Sleep?

Ants do not have a set amount of hours or minutes they need to sleep. Instead, it is based on what caste the ant belongs to and how much work needs to be done. They sleep whenever it fits their needs and lifestyle, rather than sleep for a specific period of time.

Ants do sleep, but they don’t just take one resting period as we do.

Many ants will take short naps throughout the day or night (as many as 250). Some worker ants only require about fifteen minutes per day while others need up to twelve hours of rest each day.

There are some benefits to this. One of these is that there always will be workers on the job. If something needs to be done, there will always be workers ready, since they’re basically just taking turns taking 15-minute naps.

Also read: When are ants most active?

Where Do Ants Sleep?

Ants do not sleep in the same place every night. Instead, they will relocate to multiple resting sites throughout their day. According to researchers at UC San Diego and Florida Atlantic University, ants do this based on temperature fluctuations inside of the nest.

For instance, worker ants will move further into the colony during daytime hours when the upper levels are too hot.

Ants do not sleep at night either, but instead, stay active to protect their colonies from predators. The foragers will wait inside of the nest entrance or outside in nearby vegetation until it is time to collect food again. When they do rest during this time, researchers have found that ants prefer locations close by where they do not have to do too much walking.

Ants sleep in small groups, called clusters, within the colony where they are most protected by their nestmates.

It is not known whether ants dream or not [2]. It’s almost impossible to measure, as dreams are something made up in the brain. Since ants do have brains, they can in theory dream – but since their brains are very small, they might not.

There has been no evidence to show that they do dream. However, it is believed by many scientists that the answer would be that they do in fact dream.

Ants can tell the time when asleep at night or during naps throughout the day.

Queen ant sleep times do tend to be longer than their worker ants. This is because queen ants do not need to go out and forage as the workers do, so she might have some more time on her hands.

Another study shows that ants’ lifespan is affected by the amount of time they spend dozing. Workers who were deprived of dozing had a shorter life span despite receiving more nourishment than other workers in the colony, showing how important it is to get enough doze time for ant longevity.

It’s also interesting to note that queens sleep for longer periods at a time. This is because the queen has a very different lifestyle than that of the working class ants.

While the worker ants always have something to do, this is not necessarily the case for the queen. The two groups live very different lifestyles.

Ants are eusocial insects which means they live in colonies where there’s one or more fertile females (queen do ants sleep) and a large number of non-reproducing workers. These colonies can be huge with the largest one having over 500,000 workers in it.

The queen is at the center of these colonies and spends her life creating eggs to keep up the numbers in her colony while also producing male offspring.

The female workers do not have the luxury of being able to reproduce, instead, they spend their life foraging for food and looking after the queen while also protecting her from predators.

The difference in sleep dozing between these castes is due to how important each group’s role is within the colony.

Do Ants Sleep With Their Eyes Open?

Though it may seem like ants sleep with their eyes open, they do not. Ants need to shut down completely in order for the brain and body to rest.

Do Ants Sleep Together?

The answer is yes and no. Ants do tend to sleep in smaller groups, but they do not snuggle up to each other for warmth or comfort like many other animals do at nighttime. Ants are very social insects and love staying close to their nest-mates during the day because of their pheromones (a chemical substance that triggers a social response in members of the same species).

Do Ants Sleep in Winter?

Ants do not hibernate during the winter months in the traditional sense, but they do slow down activity compared to summertimes. Worker ants will continue to forage and do tasks.

Read more about ants during winter.

Do Ants Get Tired?

Ants do get tired, but not in the same way that humans do. Human beings require sleep for rejuvenation and energy, whereas ants do not need to “recharge” after a day of work or an intense workout session. Ants have something known as polyphasic rest which is where they take short naps throughout the day. This helps them to maintain their energy levels.