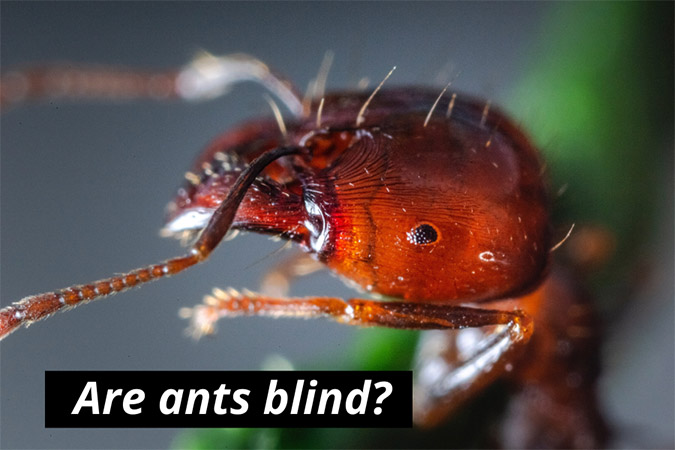 Ants can detect movement and see their surroundings, but they mostly rely on senses and information from their legs and antennae rather than their eyes.

Ants communicate and move around using noises, touch, and chemicals (called pheromones) rather than their sight.

The eyes of ants are not like ours either. Their eyes resemble an array of LEDs similar to those found in traffic lights (except in a dome shape) made up of ommatidium. Because each ommatidium perceives a single point in space, the entire eye sees a single image but distinct parts.

In this article, we’ll go into further details about ant eyes and their sight.

Some ants are blind. Others, like carpenter ants and many of the species (like the fire ant), are not blind. They do have poor vision compared to other insects though.

Ants cannot view the world with the same clarity that humans do. Their reality is hazier than ours. Given their poor eyesight, it’s amazing that ants can nonetheless perform tasks like navigating in a complicated landscape.

Ants can see colors in the green-blue range and can discriminate polarized light (light waves that oscillate in certain directions) from non-polarized light. However, even though they are sensitive to ultraviolet radiation (UV) [2], it is unlikely that they use their ability for color vision.

Instead, recent research has suggested UV detection may enable them to detect objects such as food or predators with an eye adapted specifically for this part of the spectrum.

The ancestors of modern ants were probably already able to see when they evolved around 130 million years ago during the Cretaceous period and had a head with compound eyes made up of ommatidia similar to those found on present-day ant eyes.

Ants are not able to distinguish between different colors.

The human eye has three color receptors that are sensitive to red, green, and blue light. Ant eyes have only two types of receptors for ultraviolet (UV) light instead of the three retinal cones in humans. This means they cannot see as wide a range of colors as humans can.

Some species have been found to be fully nocturnal [3], meaning they exclusively operate at night after sunset.

Keeping ants under dim red light is still an effective technique to study them in low light conditions. However, there is evidence that ants can see red, particularly scarlet red, under specific situations.

Do ants have eyes?

Yes, the majority of ants have two huge compound eyes. They have basic functioning eyes made up of numerous ommatidia (eye facets) ocelli that sense light and shade.

Read more: Do ants have eyes?

Ants also have two antennae that they utilize to identify their nest members and detect threats, so they don’t have to rely on eyesight.

Also read: Ant anatomy – How are they built?

Ant eyes are relatively simple compared with those of vertebrates like humans. Still, they are efficient enough for ants’ survival because there is less need for high visual acuity underground, where darkness reigns most of the time.

Ants do not always need eyes, but some species use them to determine the location of light sources and shadows in their surroundings. They cannot focus on these images or produce clear images because they only see different shades of black and white. However, studies show that compound eyes are sensitive to certain wavelengths of light.

How do ants see?

Although most ant species do not have excellent vision for seeing far away, their eyes feature many lenses. Ants can detect movement and see their surroundings, but they rely on senses and information from their legs and antennae rather than their eyes.

Ants are unable to focus on objects, so they cannot perceive the finer details of their surroundings. They cannot see colors but can distinguish between different light sources and are sensitive to certain wavelengths of light.

Their vision is not perfect because ants are comparatively small animals with basic eyes that allow them only black-and-white images or the ability to differentiate between light and dark. Ants are sensitive to polarized light, which allows them to orient themselves in the sun’s path or construct their nests according to solar orientation.

What are eyeless ants?

Eyeless ants are, as you might’ve guessed, ants without eyes, though it’s usually only the worker that doesn’t have eyes. The reproductive males and females typically have eyes for orientation when mating and dispersing.

Ants do not have ears, and some do not have eyes. Ants “listen” by sensing vibrations from the ground with their feet, and eyeless ants, such as the driver ant species, may communicate with their antennae.

Did ants always have eyes?

While we cannot answer this question for certain, it is generally accepted that ants first evolved around 130 million years ago during the Cretaceous period [4] and had a head with compound eyes made up of ommatidia similar to those found on present-day ant eyes.

There are two reasonings to the question: “Did ants always have eyes”:

Yes, because mutations in genes are rarer than adaptations through natural selection. The advantage provided by eye development may have been too high to allow the mutation not to be passed down from generation to generation.

No, since there has never been any evidence suggesting that ancestor species did not see or sense their surroundings before evolving into ants as they are today.