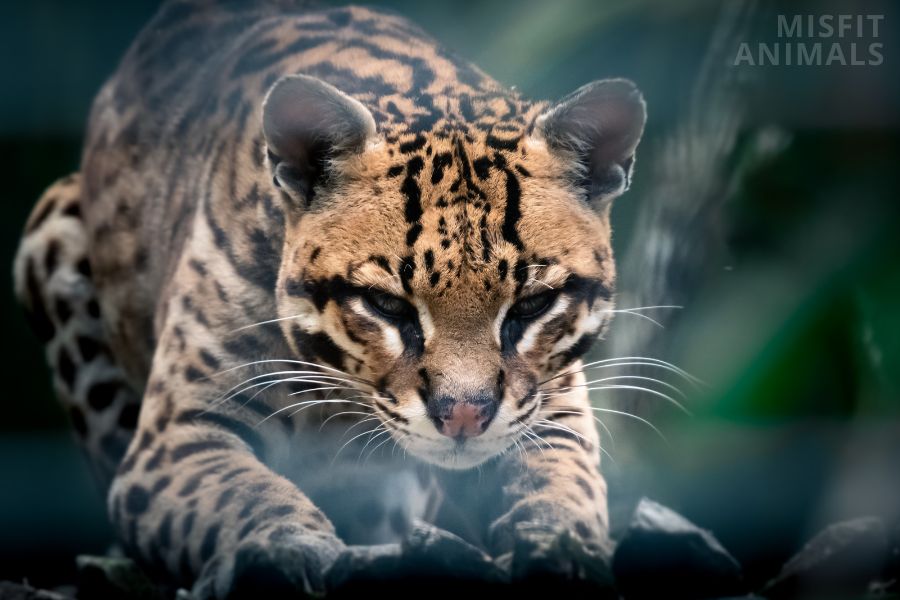 Ocelots (Leopardus pardalis) are small-sized wildcats. They live in tropical, subtropical, and semi-arid regions of the Americas. Ocelots are carnivores of the Leopardus genus. Ocelots prey on small animals and live 7–13 years in the wild.

Ocelots are fascinating creatures that pique the curiosity of many wildlife enthusiasts.

These elegant wildcats almost went extinct due to human activity.[1] There are more than 1 million today.[2]

This article covers everything you need to know about ocelots, including size, appearance, habits, habitat, and diet.

There are many exciting facts about ocelots: They are the second-largest spotted cats, they can’t roar roar, and they are fast compared to many other animals.

Ocelots are difficult to find in the wild. They are shy and reclusive animals. That’s why most people don’t know a lot about them.

Here are 5 interesting facts about ocelots:

1. The Heaviest Ocelot Was 44 pounds

The documentation was in 2002.[3] This record-setting ocelot weighed as much as an average 6 years old child.

Ocelots were hunted for their exotic spotted fur. They were once near extinction. Hunting has not been a problem for the ocelot population since the 80s.[4]

Ocelots and other smaller cats, like housecats can’t roar. Only big cats like lions can roar. Ocelots can purr, while big cats cannot.[5]

The ocelot’s top speed is fast at around 38 mph, but they are slow compared to cheetahs.[6] Cheetahs are the fastest land animals and can run 70mph. That’s 35 mph faster than ocelots.

Ocelots are part of the family Felidae. Their genus, Leopardus consists of 8 species. The first ancestors of the ocelot are 8 million years old. There are 4 distinct types of ocelot population.

Ocelots are wildcats of the order Carnivora. Carl Linnaeus described their classification in 1758.

Ocelots are distant relatives of every species in the Felinae subfamily. This includes animals like cheetahs and cougars.

The closest relatives of the ocelot are cats in the genus Leopardus. There are seven other species in this genus. The ocelot is the biggest of them.[8]

The 8 species of Leopardus:

The ocelot descended from an extinct feline species in Asia. These ancestors have also evolved into Lynx, Cougar, Leopard Cat, and Domestic Cat.

The direct ancestor of the ocelot migrated to North America about 8 million years ago. The ocelot group split from them ~5 million years later, and evolved into 8 distinct species.

A possible ancestor of ocelots is the Felis lacustris or the Felis rexroadensis. Fossils of these species are 4-5 million years old.

Ocelots spread around the Americas 1.5-2.5 million years ago. While cheetahs and jaguars migrated to other regions, ocelots remained in the habitat they live in today.

These two species are spread out across four regions:

There are big differences in the ocelots’ genetic build between these four distinctive regions.

Ocelots are small-sized wildcats. They have tan fur on their back and white bellies. There are black botches all over their body. Ocelots weigh 24-35 pounds and grow to be 28-40 inches long. Males are bigger than females.

Ocelots’ appearance varies based on their habitat, but only a little. They generally look similar, no matter the region.[9]

Ocelots have tan and orange fur, except for their white belly. Despite being called spotted cats, they have black botches and stripes all over their coat.

Ocelots are lean and nimble. They have big ears and eyes. Their claws are retractable and they have sharp incisor teeth.

Their long and striped tails are ~14 inches.

Twice as big as housecats, ocelots are the largest species of the Leopardus. Kittens can fit in the palms of an adult woman.[10]

Ocelots live in the continental Americas. They prefer warmer climates. They inhabit tropical and subtropical rainforests, semi-arid brushlands, and areas near water sources.

Ocelots are exclusive to South- and Central America, and the southern tip of the USA.

They prefer areas with heavy vegetation as it offers them hiding space.

Ocelots live in almost all countries of the continental Americas.

They are found in every country except Chile and Canada. Ocelots dislike Chile’s climate and there are few prey animals for them there. Canada’s weather is too cold for ocelots.

Ocelots in the USA only inhabit Texas and Arizona.

Related: Where Do Ocelots Live?

Ocelots live in areas with heavy vegetation and access to fresh water. These habitats offer ocelots many animals they like to hunt (like rodents) and hiding space for their dens.

Ocelots hunt at night and travel for up to 12 hours daily. They are solitary animals but come together to mate. Males have a territory of ~35 mi2 while females have ~9 mi2. Ocelots make dens in dense vegetation for their offspring.

While ocelots are territorial animals, male ocelot ranges overlap at least one female ocelot’s range, so they can come together to mate.

Ocelots usually only meet to mate, avoiding each other the rest of the year.

Ocelots are nocturnal animals. They hunt at night and rest by day. They also hunt alone.

When hunting, ocelots pounce on their target and try to kill them instantly. They mainly look for prey on land, but they also climb trees or swim for food.

They kill an animal about every 3 hours. When ocelots have had enough to eat, they will hide the carcass for later.

Ocelots communicate via scent when they want to mate. Males and females meet up and rub their cheeks and shoulders. They do occasionally play with each other.

Males and females meet five to ten times when mating, as it is difficult for females to get pregnant.

Ocelots mate all year round, but some evidence suggests mating seasons as male ocelots’ productivity peaks around summer.

Ocelot dens are located in dense vegetation. There’s only enough space inside to crawl for them.

They typically don’t have a home den. The only reason they use dens is for females to raise and protect their kittens.

Ocelots are carnivores, meaning they only eat meat. They clean their targets before eating them.

Ocelots encounter different species based on their habitat, but the types of animals they eat are the same. They mostly attack animals weighing ~15% of their body mass.

Ocelots eat 1.2-1.9 pounds of meat per day. This is less than ten percent of their average weight.

Ocelots might eat more meat if they’re particularly hungry. If they haven’t found enough prey for several days, they often eat around one pound more after a successful hunt.

Ocelots are victims of deforestation and loss of territory due to agriculture. They have no natural predators, but bigger cats sharing their habitat can attack them.

Ocelots were once hunted by humans for their fur, but nowadays it’s a much smaller concern.

Their small litter size of one to four kittens and difficulty to become pregnant is one of the major threats to their population.

Ocelots are under threat of habitat loss. Rainforests are being cut down and plain areas are being used for agriculture.

The brushlands in the USA are almost eradicated.

Ocelots don’t have predators, but they can encounter hostile animals.

Ocelots give birth to one to four kittens per litter. The kittens stay with their mother for up to two years. Ocelots live for ~7-13 years in the wild where they go through three life stages.

Females wait for one to two years between births. This averages ~5-6 litters per female throughout their lifetime.

Ocelots are pregnant for 79-85 days. This is a long time compared to other small cats, like housecats (~60 days).

Ocelots live for 7-13 years in the wild on average. Some individuals live for up to 20 years.

They live longer in captivity as they are capable of reaching 28 years in extreme cases.

Ocelots avoid humans. They don’t consider us prey and are generally scared of us. An average adult is stronger than a mature ocelot.

While ocelots are generally afraid of humans, they shouldn’t be provoked. Their claws and teeth are still capable to harm us.

Adult ocelots are also bigger than young children. They don’t hunt for kids, but they can inflict serious harm on them.

Some poachers might hunt ocelots for their fur. They are also sometimes killed by farmers to defend their poultry.

There are around a million ocelots alive today. There are fewer than 60 ocelots in the US as most ocelots live in Brazil and Argentina.

Predictions show the ocelot population to be a maximum of 1.5 million.

While their population is decreasing, ocelots are classified as “Least Concern” on the IUCN Red List.

Ocelots are a protected species in the US. Conservation strategies include relocating ocelots and to cooperate with farmers.

Ocelots look like each other regardless of habitat. They’re lean wildcats with long tails, big ears, and sharp claws.

Here are some pictures of ocelots.

What Does Ocelot Mean?

The ocelot name comes from the Nahuatl “tlalocelot”, which means field tiger. Nahuatl is the language of the Aztec people. The Aztec Empire was in Central Mexico, where they met a lot of ocelots.

Do Ocelots Live Near Humans?

Yes, ocelots can live near human settlements. It’s rare to find them near cities, as they prefer areas with more vegetation. You can find ocelots near farms or less populated areas.

Can You Keep Ocelots As Pets?

It is not a good idea to keep ocelots as pets. They’re aggressive by nature. Ocelots need large space to roam. It is expensive to keep an ocelot in captivity.

Yes, ocelots sometimes eat dogs. Small breeds are often smaller than ocelots, so They’re not safe. Large breeds are much stronger than them, so ocelots avoid hunting bigger dogs.

Do Ocelots Live in Europe?

No, ocelots don’t live in Europe. They only live in the continental Americas. Ocelots need tropical, subtropical, and semi-arid climates, which can’t be found in Europe

Do Ocelots Live In Mountains?

No, Ocelots don’t live in mountains. There’s not enough vegetation for them and it doesn’t offer them enough prey. Ocelots prefer areas with thick vegetation where they can find small animals, like rodents.

What Was The Oldest Ocelot?