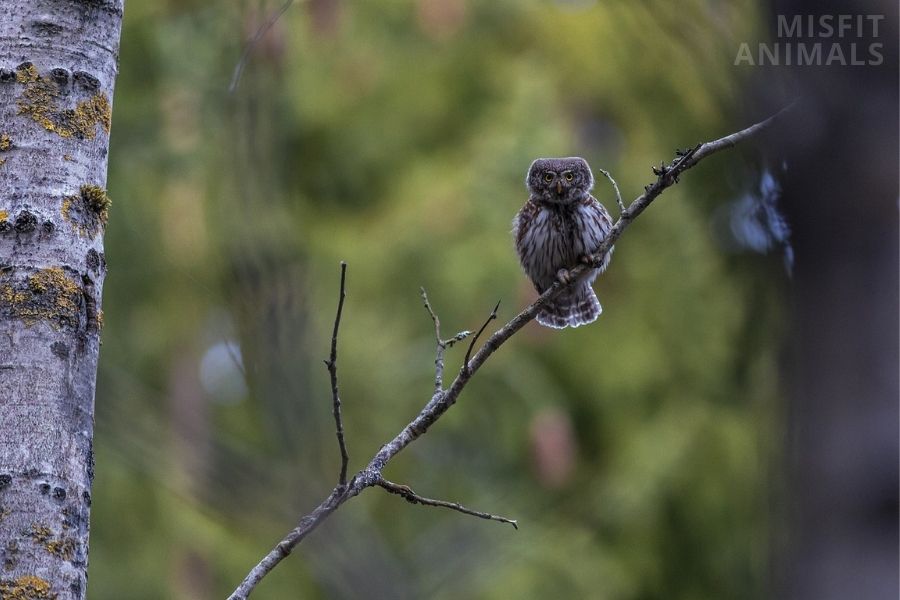 Elf owls are small, nocturnal birds that live in the desert. Their name comes from their unusual size; “elf” is a reference to the elves that everyone knows.

With its distinctive markings and sweet song, the elf owl is one of the most captivating birds in North America.

These owls are members of the Strigidae family and are considered to be true owls.

Elf owls are often captured in photographs, but few ever get to see one in person. Elf owls are nocturnal birds of prey that live throughout North America. They are tiny raptors, considerably smaller than the average owl.

Here are a few interesting facts about owls that you need to know.

Elf owls are a member of the Strigidae family, which is the biggest family of owls.  Some of the most well-known and largest owl species belong to this family.

The elf owl is a tiny bird with one of the smallest bodies in its genus. As a result, it does not have all the characteristics that most other owl species have.

They were first described in 1861 by an American naturalist by the name of James Graham Cooper, named to honor Josiah Whitney, a geologist.[2]

There are four recognized subspecies of elf owls.

Related: All Types of Owls

The Elf Owl is a small creature. They can grow up to 5.5 inches tall and have a wingspan of 10-11 inches, making it one of the smallest owls known, about the size of a sparrow.

Elf Owls are brown except for some streaks on their head and neck which are black, white, and rufous. They also have yellow eyes.

With well-adapted wings for maneuvering both in trees and open areas, they are efficient woodland hunters, allowing them to catch insects like moths and grasshoppers. Their talons are also adapted for catching small prey. They are not known to attack larger animals, including humans.

The elf owl can mainly be found in riparian woodlands and various areas of the Sonoran Desert Region. They are endemic to North America and Mexico.

The distribution and habitat of this species of owl vary by their population density. They are found in the southwestern United States and Mexico, mainly theSonoran Desert Region.[3]

Elf owls are commonly found in the following states:

The habitat can be described as forest/woodland areas with a large number of saguaro cacti.

They are also found in dense woodlands with a high amount of vegetation. The owls build their nests in tree cavities which they line thickly with plant debris for comfort and insulation against the cold.

The Elf owl is nocturnal which means they are active at night. During the day Elf owls sleep, which makes them relatively easy prey for other predators if they aren’t properly hidden. All main activities take place at night, including hunting, mating, and feeding.

These owls have a distinctive call that can be heard from a distance of 1 km.  The sound of an Elf owl is easily recognized because of the oscillations that occur, which are similar to a tremolo.

The primary food source of the Elf Owl is insects. Moths (Lepidoptera) make up a great ideal of their diets. The Elf Owl will also eat small reptiles and bats.

The diet of the Elf Owl varies depending on location and habitat. In northern regions, insects are a very popular food source.[4]

Elf Owls rest in trees (perching), waiting for prey to pass by them. They hunt at dusk and continue through the night until dawn where they return to their roosting place to sleep.

Among the Elf owl’s natural predators are other owls, snakes, coyotes, bobcats, and ringtails.

Because of the small size of elf owls, they are at great risk from predators, including both birds and land-bound animals.

Predators can spot elf owls because their feet can’t be completely camouflaged. Bobcats and ringtails prey on the elf owl by pouncing on them and killing them with their sharp teeth and claws.

Many threats to the elf owl’s survival are caused by humans, such as climate change, pollution, and deforestation.

Elf owls typically reproduce once a year, laying three eggs at a time. They can live for 3–6 years in the wild. This number increases to 10–14 years in captivity.

Mating begins with a song and mating ritual from the male. Males court the females with songs. They mate for three months at a time, living in close proximity but not in the same nest.

The female elf owl is responsible for building the nest and sitting on the eggs for most of the day while the male feeds her. The female elf owl does shifts of about three hours at a time before returning to the nest. During the breaks she feeds.

Eggs are incubated for about 24 days, usually between March and May.

When born, the owlets weigh less than one gram each. They are almost completely naked, with just a few long white down feathers covering their bodies. Owlets are born with their eyes closed, but after about ten days they open.

By the time the female elf owl is done brooding, they will have tripled in size and weight to approximately three grams each.

Related: How Long Do Owls Live?

The elf owl population is about 72,000. They’re considered as “Least Concern” by the IUCN Redlist.

The elf owl has a huge range across the Americas. The only places that do not have elf owls are extremely hot regions, extremely cold regions, and very dry deserts. They can also be found in many areas where humans reside.

What Is an Elf Owl?

The Elf Owl is a small owl species that inhabit the same area as other types of owls do, which includes forests, deserts, and woodland areas. It is native to North America, where it lives in the southwestern part of the continent.

Can You Keep Elf Owls as a Pet?

The answer to this question is no. The United States does not allow anyone to keep elf owls as pets. Elf owls are listed as an animal that cannot be kept or sold in the United States.