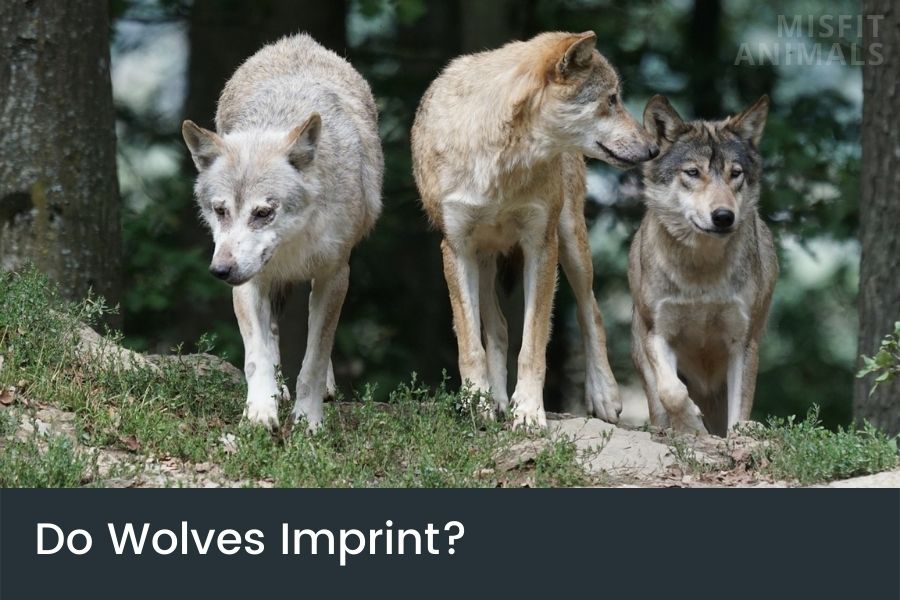 Wolves usually don’t imprint anyone other than their parents, and it’s very rare that they do so on humans. However, it can happen.

Imprinting is a type of learning behavior and social bonding seen in some animals.

There are multiple types of imprinting, but the most common and best known is filial imprinting. Here, a young animal will focus on a single object, typically a parent, and learn from them, follow them, etc.

In this article, we will talk more about the concept of imprinting and how it applies to wolves.

Imprinting is a type of attachment that can form between an animal and another individual. It has been observed in many different species, from birds to mammals, including humans.

In imprinting, the young learn who their mother or other caregiver is by following them around.

Here’s how Konrad Lorenz first described it in the 1930’s:

“Imprinting occurs when an animal forms an attachment to the first thing it sees upon hatching.”

For example, baby geese imprint on the first moving object they see when they hatch, which is usually their mother.

There are a few different schools of thought on imprinting in wolves. Some people believe that all wolves imprint and that it is an essential part of their development.

Others believe that imprinting only occurs if the wolf has no contact with other wolves during its developmental period.

Why Is Imprinting Important?

Imprinting is important because it defines the behavior of an animal. Imprinting can help animals feel comfortable in their environment and make stronger relationships with other members of their species, or other species.

Learning through imprinting ensures that the wolf will be able to live in its environment, interact with other members of its species, and survive as long as possible.

This is how they learn the culture of the pack, their hunting strategies, and more. It helps the wolf understand their environment and learn how to survive.

Yes, wolves do imprint. They typically take part in filial imprinting, where they imprint on their parents, where social imprinting is more uncommon.

However, wolves typically imprint on their parents, as their mother is the first thing they see, when they’re born. For a wolf to imprint on a person, certain conditions would have to be met.

Imprinting with a person can only happen when a very young wolf has little or no contact with other members of its species during early development, separated from their original pack.

Imprinting is the process by which an animal learns the characteristics of its parents or caretakers. It’s most famously known for ducks imprinting on humans, but it occurs in many different animals. [1]

For wolves, imprinting usually means learning how to behave like a wolf. If they are raised with no contact with other wolves, they may imprint on the first wolves they meet, or their caretaker.

However, there is some debate over whether or not wolves actually imprint.

Some people believe that imprinting only occurs in ducks and other waterfowl, while others think that all animals can imprint. There is no definitive answer to this question since it has yet to be studied extensively.

Dogs give us a clue as to whether wolves imprint or not. In the first three months of a dog’s life, it may imprint on humans, forming a close social bond with their owner. [2]

Do Wolves Imprint on Humans

When wolves imprint, they typically do so on their mother. The mother wolf is the first thing a newly born wolf will typically see.

Wolves may imprint on the first thing they see, even if it’s another animal or human being. Since they’re born blind, they would have to be separated from their mother, if they were to imprint on a human.

Related: Can you tame a wolf?

How Do Wolves Imprint on Someone?

Imprinting typically happens when a newborn animal opens its eyes for the first time. They’ll see some figure standing above them, and automatically assume that it’s their mother, father, or caretaker. This is a natural instinct.

Believing that their caretaker is standing above them, they’ll automatically form an instantaneous bond with them.

If this figure cares for them, feeds them, and protects them further, the bond will become stronger and stronger. They’ll follow their caretaker around, doing what they do.

That is until they become adults. Wolves are wild animals, and when they become sexually mature, their natural instincts may take over.

Do Wolves Imprint on Their Mother?

Yes, wolves usually imprint on their mother she’s the one that takes care of them, feeds them, and protects them. She does this along with the other wolves in the pack.

When wolves grow up, they’re protected by the entire pack. All the wolves look after the new pups, as they’re important to the survival of the pack. Hence, wolf pups learn from all the wolves in the pack, and not just their mother.

Do Wolves Imprint on Other Wolves?

Yes, wolves do imprint on other wolves. As stated, while they do have a close relationship with their mother, they’re also cared for and protected by other wolves in the pack. Hence, they’ll also learn from them.

The behavior of a wolf is hence determined by the pack culture, as well as their own personality.

When humans think of imprinting, most people think of birds, or more specifically, ducklings. Baby ducks are famous for imprinting, as they’ll follow the first animal or person they see.

Other animals that imprint includes:

Humans have used this information for many years for domestication purposes. It’s much easier to raise an animal if they already have a close connection with you from they’re born.

Wolves do imprint, but they rarely do so onto humans. Wolves will typically imprint on their mother, as this will be the first creature they see once their eyes open.

Wolves may imprint on humans if they’re separated from their pack and raised by humans from a very young age.

Imprinting comes in several forms, but the most commonly known is filial imprinting. This is where an animal connects with and follows the first object they see after birth. This is seen in ducks, other waterfowl, and even mammals.