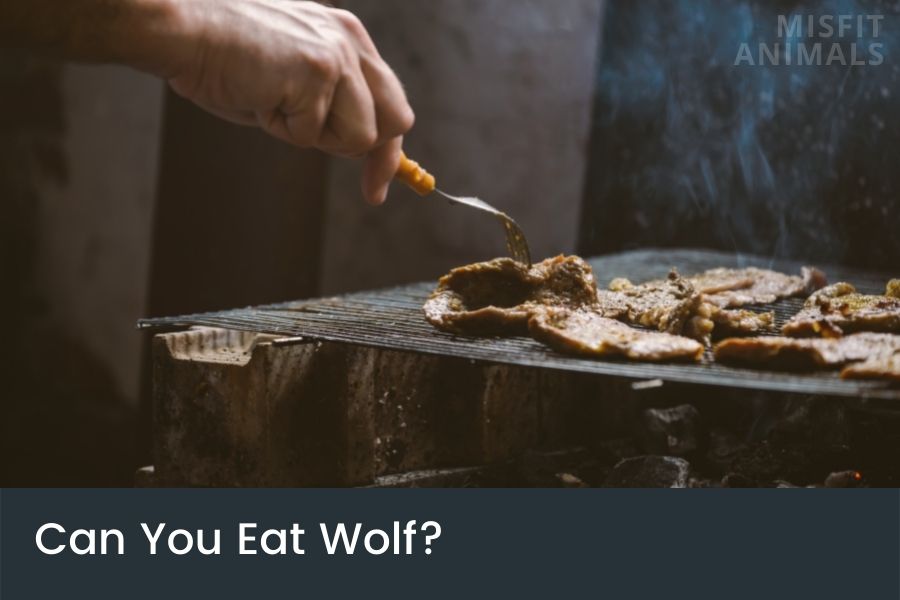 Yes, you can indeed eat wolf meat, but not a lot of people do so. It’s illegal to hunt wolves in many countries, and hence it’s very difficult to acquire this meat.

Some people don’t like the taste of wolf meat and others think it is just too strange. Though some may think otherwise, anyone can eat wolf meat as long as they’re in a country where hunting and eating wolves isn’t illegal or if they have a license to do so.

In this article, we’ll talk more about how some people eat wolf meat, and how they go about doing so.

Can You Eat Wolf Meat?

Yes, you can eat wolf meat. It is not poisonous and has been eaten by humans for centuries in some parts of the world. However, it may not taste as good as other types of meat and can be difficult to acquire.

Wolves are mainly hunted for their fur and not their meat, so it can be hard to find this type of meat in stores.

Additionally, different people have different opinions on whether or not wolf meat tastes good – some say it’s an acquired taste.

Humans’ tastebuds have developed over time. The more we eat something, the better tasting we find it. Hence, as few people eat wolf meat nowadays, our tastebuds haven’t evolved to find wolf meat tasting. [1]

The meat from carnivores is also usually tougher.

Yes, some people do eat wolf meat. However, some people say that it’s an acquired taste, while others even consider it to be inedible.

People rarely eat wolf meat though. This may partly be because it’s difficult to acquire, but also because it may not taste as well as other types of meat.

Wolves are primarily eaten where they’re legal to hunt, such as in some Asian countries and Mongolia. For taste, some people report wolf meat to taste poorly and strange, while others say they like it. It depends on your preference.

The main reason why many people don’t eat wolves is simply that there are easier meats to get their hands on. We can’t domesticate wolves, as they’re wild animals and have certain requirements to thrive. [2]

Animals such as cows, pigs, and chickens are easier to breed and to keep, which is why humans eat the most meat from these animals.

There are several reasons why more people do not eat wolf meat as frequently as other types of animal protein:

First of all, there’s the issue of acquiring it. In order to get our hands on wolf meat, we have to hunt wolves. This is illegal in most countries. It’s much easier, and cheaper, to acquire meat from cows, as these are domesticated farm animals.

Then there’s the distinct taste. People eat what they like, and wolf meat has been described as a unique taste. Much like some people don’t enjoy meat from wild game, wolf meat is an acquired taste, or so it’s been described.

Where Do People Eat Wolf Meat?

Wolf meat is mainly eaten in countries where it is legal to hunt wolves, such as Asia and Mongolia. [3]

In some cases, it can also be found in specialty butcher shops or restaurants. There are very few places where you can purchase wolf meat, so most people who want to eat it can only acquire it through hunting.

While the wolf population isn’t considered endangered anymore, they’re not the most plentiful animal on the planet. Hence, hunting wolves is a threat to the continued preservation of the species.

Nevertheless, more and more states in the US allow for wolf hunting. [4]

The taste of wolf meat can vary depending on the animal itself and how it was hunted or raised. Some people report that it tastes poorly and strange, while others say they like it.

In other words, it depends on your palate, so it’s best to try it yourself before making any judgments.

Wolf meat can provide you with various nutrients, including protein, iron, and zinc.

A three-ounce serving of cooked wolf meat contains about 25 grams of protein, which is more than what’s found in beef or pork. It also has significant amounts of niacin, vitamin B12, selenium, and phosphorus.

How Do You Prepare and Cook Wolf Meat?

There are a few things you need to know before cooking wolf meat. First of all, the meat is very lean and has a low-fat content. This means that it can dry out quickly if not cooked properly.

You’ll need to cook wolf meat slowly over low heat to ensure that it doesn’t become tough or chewy.

Secondly, wolf meat has a strong flavor which can be off-putting for some people. Some suggest marinating the meat in herbs and spices before cooking to help mask the taste.

Lastly, because the wolf is an uncommon type of meat, many recipes online may not be applicable. You’ll likely have to experiment a little bit to find the best way to cook and prepare wolf meat.

Can You Buy Wolf Meat (If So, Where?)

Yes, you can buy wolf meat. It is not commonly found in grocery stores, but it can be acquired through specialty butcher shops or online retailers.

Depending on where you live, the availability of wolf meat may vary. In some countries, such as Mongolia, wolf hunting is legal and the meat can be easily acquired. However, in other countries, it may be more difficult to find.

Yes, you can eat wolf meat though some people say that it’s an acquired taste. Some even consider it to be inedible.

People rarely eat wolf meat. This may partly be because it’s difficult to acquire, but also because it may not taste as well as other types of meat.

Wolf meat is mainly eaten where they’re legal to hunt, such as in some Asian countries and Mongolia.

For taste, some people report wolf meat to taste poorly and strange, while others say they like it. It depends on your own palate. Some people think that the taste can be improved by smoking the meat or cooking it with a certain marinade.