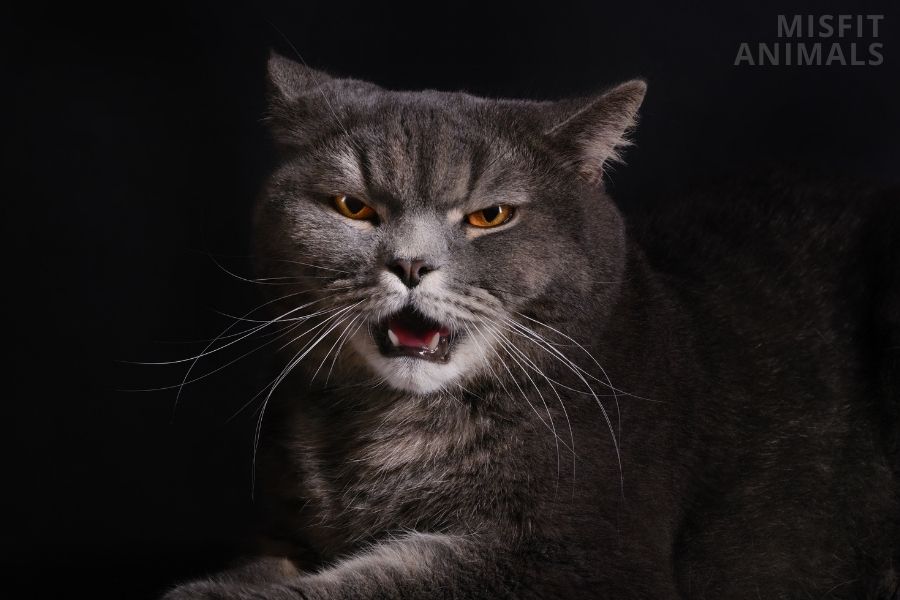 Yes, owls do occasionally eat cats. While it’s rare, these birds of prey have been seen hunting, killing, and eating wild and pet cats. Not all owls are large enough to feed on cats.

Owls have a bad reputation as being vicious, blood-thirsty birds that snatch up any small animal in sight, including cats.

But is this really true? Do owls eat cats?

In this blog post, we’ll take a look at some of the essential facts you wish you knew about owls and explore the truth of whether owls hunt cats.

Owls, like most birds of prey, do not typically eat cats, especially domestic cats, as these often hang around people. It mostly occurs when large owls are desperate for food.

The majority of the time, owls are found to prefer consuming small mammals including mice, rats, and squirrels. They often also feed on other birds.

An owl’s diet does vary depending on its species[1]. For example, some owls eat insects while others do not. The Northern Hawk Owl will often eat the occasional amphibian or reptile when available.

While it is quite rare for an owl to catch and kill a cat, there are recorded cases of this happening. Cats are naturally curious and have a tendency to approach wild animals, even if the animal is a threat. This curiosity has led to fatal consequences in both cats and owls.

When Do Owls Attack Cats?

Owls are generally known for being harmless, or at least very rarely harmful. When do owls attack cats?

There are some species of owls that prey on small cats. The Barn Owl is the most famous, even though it usually lives off of mice and other small mammals. A few times a year, a Barn Owl will hunt and kill the occasional cat.

Another owl that has the ability to kill cats is the great horned owl. These are the largest of all owls. Their size allows them to hunt larger prey, such as cats or other pets.

Can Owls Lift a Cat?

Large owls can lift a cat that’s around five pounds, however, small owls can’t lift more than one to three pounds. Great horned owls are able to carry away small pets, while small owls can’t.

What Animals do Owls Eat?

Owls are known to catch and eat many different types of animals. While owls do eat small mammals like mice, rats, hares, squirrels, rabbits, etc., they also prey on animals like fish, reptiles, amphibians, and insects.

Owls are somewhere at the top of the food chain[2]. They aren’t apex predators, as they are also hunted by other animals, but they are still predators.

Most species eat insects in large or small quantities. Some particular insects that owls eat are the following:

Birds are another common prey for owls to eat. Some types of birds that are eaten by owls include:

The biggest part of many owls’ diet is small mammals, including rodents, rabbits, squirrels, rats, mice, and other similar prey items. A lot of the time they will eat these animals when they are young or still in their eggs.

Owls are great hunters, relying on their superior eyesight and hearing to catch animals at night. Though they are known to hunt rodents, many owls will also eat small mammals like cats.

Owls are meat-eating animals, but they typically don’t eat cats. This is because cats are too agile and intelligent to be preyed upon by owls.

Cats have a high prey drive, which means they are hardwired to seek out and kill other animals for food. They are also well-adapted for hunting; their night vision is nearly as good as an owl’s, and their powerful legs make short work of any bird or mouse they can get their claws on.

While this all makes cats great hunters, it also makes them great at avoiding other predators.

Owls typically don’t eat such agile prey; they’re outmatched and out-powered by cats. If a cat sees an owl, it may attack the bird on sight, making its escape all but impossible.

How Do Owls Hunt Cats?

Owls are secretive hunters, mainly active during the night. Many owls hunt by swooping down to prey on their victims. Other owls sit and wait for prey to come to them or fly slowly over grasslands in search of food.

Owls have excellent night vision and a keen sense of hearing. They’re patient and have been known to sit and wait for prey for several hours at a time.

When they do spot a prey animal, they’ll fly down, completely silent, taking advantage of the element of surprise. With their strong feet, they’ll grab the prey, either choking it or using its talons to kill it.

Cats are known to be hunted by the following animals:

Wild cats are often eaten in jungles and rainforests because they’re easy prey for jaguars and leopards. As for domestic cats, they’re sometimes killed when wandering off into forests. Here, predators such as wolves, foxes, and coyotes are waiting eagerly for a meal.

How To Protect Cats From Owl Attacks

A number of strategies exist to help keep your feline friend safe from owl attacks. Here are some tips to help you protect your cat:

While owls typically prey on small mammals, they have also been known to eat cats on occasion. Not all owls are large enough to prey on cats, but those that are do attack cats from time to time. It typically happens if other prey isn’t available.