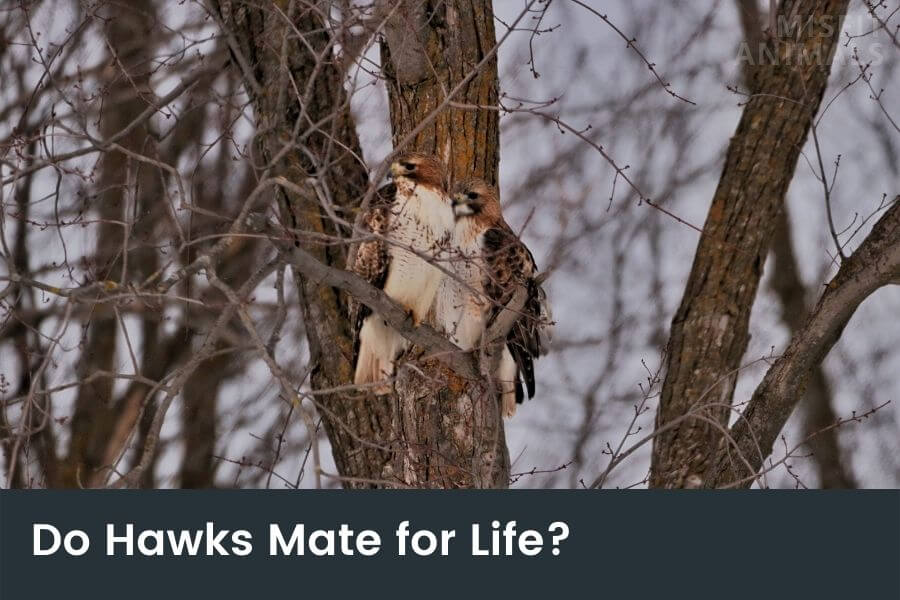 Yes, hawks do mate for life. As long as both mates are alive, they’ll pair up year after year. While a mating pair of hawks don’t live together all year, they’ll still breed each year.

Do hawks mate for life?

There are certainly many examples of hawk couples remaining together for many years, but there is no guarantee that they will stay together forever.

In this blog post, we will explore the mating and nesting behavior of hawks in more detail to get a better understanding of their love lives.

We’ll also discuss why some hawks mate for life, while others don’t.

Do Hawks Mate for Life?

Hawks do generally mate for life. Once they’ve found a partner, they’ll nest, breed, and raise their younglings year after year – except if once mate is killed. Not all species mate for life.

Many people do not realize that there are different types of mating systems among animals. One mating system is called monogamy which means one male mates with one female.

Most hawks take part in monogamy[1], however, there are certain criteria needed to achieve such as thing, such as whether one of the individuals is killed, or otherwise dies.

It’s important to note that not all species mate for life.

When hawks mate for life, they often return to the same nesting grounds year after year, as long as there are enough food sources. If their mate dies, they may change location.

Not All Species Mate for Life

Hawks do not always mate for life. Although mating for life is common among hawks, it is not universal.

Many birds do not choose one partner with which to spend their lives, but rather will mate with multiple partners at different times in their lives.

The benefits of monogamy are thought to be increased parental care and increased offspring survival[2]. Monogamy is often believed to be the most effective survival strategy for adult birds because it provides both parents with an increased ability to care for their offspring.

Predators Can Kill a Mate

Hawks can mate for life, but it doesn’t always go that way. Sometimes, a mate is killed, leaving the remaining hawk to seek out a new partner.

Although this may sound harsh, it’s true. This applies to many animals in the animal kingdom.

Hence, hawks don’t always choose whether they mate for life. The natural flow of life can get it the way, as hawks are preyed upon by a number of animals.

While hawks do mate for life, they do not live together. While it may sound strange, most hawk couples don’t share a nest, except during breeding season.

Typically, a mating pair will live in the same general area, as they can still help each other hunting.

This behavior changes during the breeding season. The hawks will “move in together”, and will share a nest until their offspring can fly off on their own.

Both hawks help in regards to raising the offspring, caring for them, and hunting for food for them.

Which Hawk Species Mate for Life?

Many hawks species mate for life, such as the Red-tailed hawk, Harris’ hawks, and Cooper hawks.

Some hawks mate for life. Others don’t. This comes down to their natural evolution and adaptations.

Let’s take a look at a few of them.

Do Red-Tailed Hawks Mate for Life?

Red-tailed hawks are one of the most common North American hawks, so do they mate for life like many other bird species?

These raptors often hunt in pairs during the breeding season and don’t migrate far. They form monogamous bonds with their mates to protect their nests year after year.

Do Harris Hawks Mate for Life?

Harris’ hawks will mate for life if the conditions allow them to. They may be cut short by predators, or other external factors. As long as both mates are alive, they will stick together.

Do Cooper Hawks Mate for Life?

Cooper hawks mate for life. They’ll find a partner, with whom they breed each year.

The female lays between one to four eggs at a time, usually in March or April. It takes about 35 days for the eggs to hatch.

Once they do, both parents play an important role in their upbringing. They are monogamous birds, and will only find a new mate if they’re forced to do so.

Yes, most hawks are monogamous, unless they’re forced to find a new partner. They’ll stick with a single partner for their entire lives, or as long as their partner is alive.

Throughout most of the year, hawks live solitary lives. It’s not until the breeding season comes around, that they’ll mate.

Once this time comes, however, they’ll pair up with their lifelong mate.

They work together to build a nest where they can have their eggs, raise them into fledglings, and live out their lives together in good health.

Both male and female hawks take responsibility when nesting and taking care of nestlings. However, not all hawks are monogamous throughout their lives.

Other hawks live polygamous lives. They find a new mate to breed with each year.

What Happens When a Hawks Mate Dies?

When a hawk’s mate dies, it’s forced to find a new one. While hawks typically mate for life, they will find a new mate if their old mate dies.

Hawks don’t always control their own lives. Nature is dangerous, and there are many predators that prey on hawks.

When an individual of a mating pair dies, the remaining hawk will find a new partner. They may also find new nesting grounds for the coming breeding season.

If a hawk’s mate dies during the breeding season, it’ll immediately seek out a new one. There’s typically a line of hawks waiting, ready to breed.

It’s unknown whether hawks feel any sadness or stress when their mate dies.

When Is Hawk Breeding Season?

The breeding season of hawks takes place during spring, specifically from the beginning of March until the end of May.

During breed season, there’s a behavioral shift in hawks. They’ll stop living solitary lives and combine nests with their mate.[4]

This typically happens between March and April.

Once the hawks are ready to breed, and the female has laid her eggs, hawks are much more protective of their nest. They’ll patrol and guard the area around their nest to keep their offspring safe.

The two hawks will then raise their offspring together, hunt for food, and teach them how to survive. Once they’re old enough, the baby hawks will take flight, but stick around for weeks or months, until they can sufficiently hunt themselves.

Do Hawks Return to the Same Nest Every Year?

Many hawks return to the same nesting site each year, often reusing their old nest (if it’s still around).

Some hawks migrate, meaning they fly off from their summer nesting grounds in the fall. When returning in the spring, they’ll often return to the same area.

Hawks do mate for life if conditions allow them. Sometimes, a hawk’s mate will be killed, or otherwise, die. When this happens, the remaining hawk will seek out a new mate right away.

Not all hawks mate for life though, but they are monogamous, meaning they only pair up with one mate at a time.