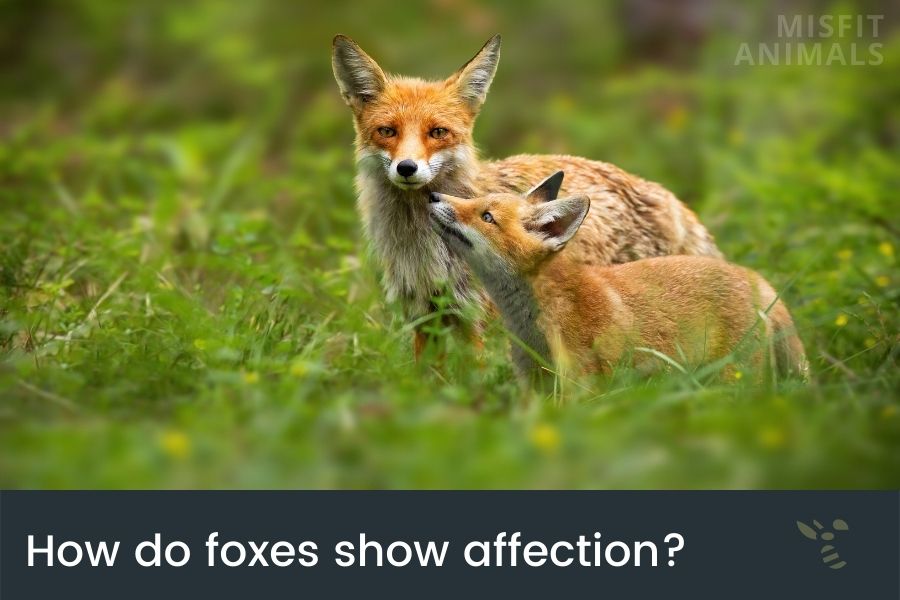 Foxes are affectionate. They show their affection in different ways, depending on how they were raised and who they’re interacting with.

Foxes are known for their cunning, playful nature, but did you know they also show affection?

And how can you tell how affectionate a fox is?

In this article, we’ll dive deeper into how foxes show affection, and what kind of foxes do so.

Foxes are affectionate, especially towards their own family. Now, wild foxes won’t be affectionate towards humans, but tame and domesticated foxes have shown this trait.

Even in animal sanctuaries for rehabilitated foxes, they’ve been observed to show some affection as well.

Foxes may be solitary hunters but they may also form social groups that live together. As said, they show affection towards members of their family group but not towards humans.

Related: Can You Keep a Pet Fox?

Family groups contain a single breeding pair of a male fox and a vixen and a few non-breeding females that are usually offspring of the previous years’ litter.

They all contribute towards raising and protecting the litter of their small family group.

What does affection mean?

In the Merriam Webster Dictionary, the word affection is defined as:

“A feeling of liking and caring for someone or something, a tender attachment, or fondness.”

This definition of affection is most appropriately applied in the human context.

There are ways that animals may look like they are showing affection towards other animals or their kind, but studies believe that they are more like instinctual responses and not an act of affection. [1]

How Affectionate Are Foxes?

Foxes form very close family units where there is a shared responsibility of raising pups. They all show affection towards the pups and each other by grooming and playing.

Foxes also cuddle, and not only to keep warm but also as a means of a security blanket for each other.

Are Foxes Affectionate Towards Humans?

Wild foxes aren’t affectionate towards humans. In some cases, where foxes have been taken in by humans, cared for, fed, and raised since they were kits (baby foxes), foxes have been observed to show affection.

These are just mostly representations of tamed behavior where the animal has developed a bond with the human caretaker and only happened due to the special circumstances.

Dimitry Belyaev and his team experimented on foxes in Russia to find out how domesticated foxes would behave. [2]

The team of researchers bred the foxes that exhibited tameness and non-aggression and in just six generations, they were able to produce foxes that showed domestication syndrome.

These foxes had floppy ears, variations in coat color, a smaller brain, and a shorter muzzle – and they showed affection and excitement towards humans.

Like dogs, the domesticated and tame foxes seek human attention. They would cuddle with their human caretakers. They also would whine when the humans left and wag their tails in to show excitement when their caretaker returned.

In the silver fox domestication experiment, foxes would bark to get their human’s attention and even licked and nuzzled the hands.

How Do Foxes Show Affection?

Foxes show affection in a number of ways. There are physical signs that they are showing affection. They also have sounds and habits that they do to other foxes that convey their affection.

In the wild, fox cubs will also wag their tails during feeding time. They will poke their snouts at their parents’ mouths as they wag their tails in anticipation of the food.

Related: Do foxes wag their tails?

Purring sounds are particularly noticed when foxes are cuddling or feeling safe and relaxed. This purring sound is a low, vibrating sound coming from its stomach.

A mother fox can also produce sounds similar to purr when feeding its cubs and when caring for them.

In the cases of tamed foxes, a fox can also purr when they are petted.

Tame foxes show the behavior of cuddling with their humans as a sign of affection.

However, in the wild, the foxes aren’t known to cuddle as adults. It’s mostly in the den that the adult fox and the pups cuddle for warmth and affirming their family bonds.

As they grow, social hierarchy is established within the litter, and fights for dominance are a common occurrence.

Aside from the sporadic cuddling, foxes also show affection to their family by grooming each other.

In the first few weeks, the vixen will usually lick and groom the kit’s ears and groin areas, mostly for cleaning purposes.

Are Foxes Friendly Towards Humans?

In general, wild foxes aren’t either friendly or aggressive towards humans. They tend to avoid human contact as much as possible.

Foxes can tolerate human presence as long as they are at a distance and don’t seem to pose any danger.

Some foxes, especially those in the urban areas, can interact with humans, especially if they’ve been given food.

This doesn’t mean it’s friendly though. It just means that the fox is now confident that you won’t hurt them. They won’t see you as a threat, but you should still keep your distance.

It’s important to understand that foxes are solitary animals, but they do form social groups just like other canids. They show affection and have a bond with their family, but it’s very rare for foxes to show any kind of affection towards humans.

Foxes usually only show physical affection to their kits. This is mostly done by the vixen (female fox). The mother of the litter will groom them, as well as feed and cuddle them. The latter is mostly for warmth and protection.

Foxes aren’t friendly or affectionate towards humans unless they’ve been raised by humans. Domesticated foxes show the same signs of affection as dogs, barking, wagging their tail, and cuddling.