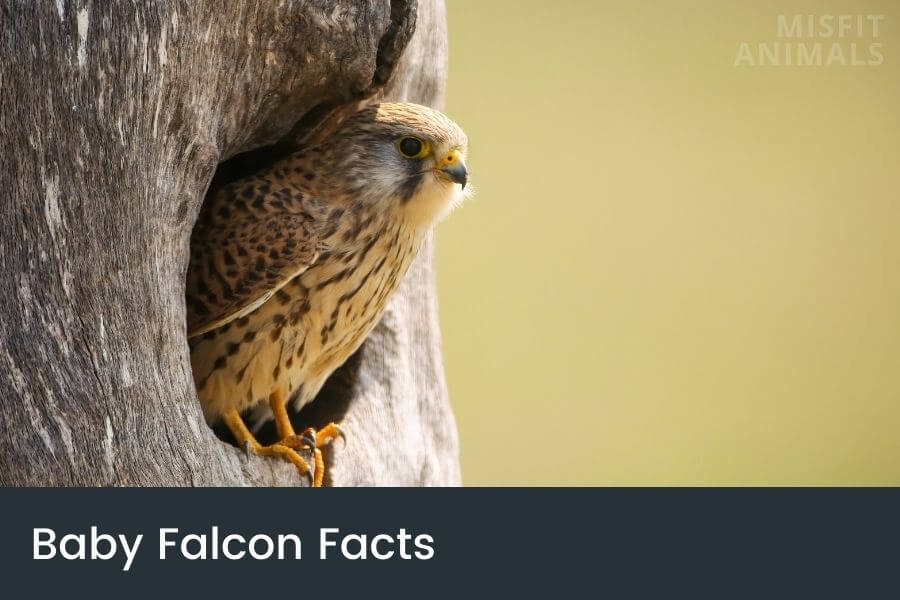 Baby falcons are eyasses. They’re small, blind, and almost featherless when born, weighing only a couple of ounces. During this stage of their life, they’re completely dependent on their parents.

Birds of prey are one of the most fascinating groups of animals that you can watch in the wild. These predators have evolved to be some of the most skilled hunters in the animal kingdom, and their aerial displays never fail to impress.

But what about their offspring? What do baby falcons look like, and what are they called?

In this article, we’ll take a closer look at baby falcons, from their common names to their distinguishing features.

What Is a Baby Falcon Called?

A baby falcon is called eyas. This term is not exclusive to falcons, as it’s also used about offspring from other birds of prey.

Several terms can be used to describe baby birds, but the offspring of falcons are known as eyasses. They may also be referred to as chicks, nestlings, or fledglings.

The baby falcon is protected with a thick layer of down and is clumsy as it learns to fly and hunt with its parents. Falcon chicks spend very little time with their mother and father.

The baby peregrine falcon is called an eyas, just like baby falcons hailing from other parts of the world such as Africa and Europe.[1]

It isn’t until the baby falcon can fly that it leaves its parent’s care. They often stay in the same area as their family after leaving the nest, flying with them while hunting.

How Big Are Baby Falcons?

Baby falcons weigh about 1.5 ounces. They are covered in light down feathers with white tips. They quickly begin developing stronger feathers.

When they hatch, baby falcons are blind. They are born with their eyes closed and cannot see their parents or any other adult birds that might be feeding them.

They cannot even see their own siblings.

As their first layer of protection, they have a special baby down (natal down) that has a grayish tint to it. This baby down helps camouflage baby falcons in the nest, as well as protect them against the harsh elements of nature.

Baby falcons are just a few inches tall and weigh about 1.5 ounces. They are covered in natal down, which quickly turns into regular down feathers.

Here’s a brief description of the key features of baby falcons:

When baby falcons are born, they can’t fly away right away because their wings aren’t strong enough to carry them yet. They need time to grow and develop before they can take to the sky on their own.

A baby peregrine falcon is about 1-2 inches tall with light down (there may be additional coloration), with some white mottling on the underside of its wings. The baby will initially have an orange beak, but it will eventually have black spots after they reach maturity.

The baby falcons look very similar to baby chickens, but they can be distinguished by their small size and the fuzz on top of their head.

Baby falcons, as with all other offspring from birds of prey, grow up quickly. They’re at risk from many dangers when they’re young, and need to be able to fly to defend themselves.

When Can a Baby Falcon Fly? (Fledge)

A baby falcon can begin flying within 4 to 6 weeks after hatching[3].  A baby falcon’s first flight lasts for about 10 to 30 feet before they land on the ground. They have a natural instinct of how to fly, but will mostly also be supervised by their parents.

When Can Falcons Hunt by Themselves?

Baby falcons can start hunting by themselves after about 6-8 weeks. This is when they’ve developed some flight muscles, and have practiced flying.

They start accruing preflight muscle mass around 4 weeks old. This is the earliest baby falcons can start to fly and hunt for themselves.

Many falcons will begin hunting when they are around 5 weeks old, but this ultimately depends on individual development.

Generally speaking, baby falcons begin flying at approximately 6 weeks old, and they can begin hunting when they’re around 8 weeks.

How Long Do Falcons Stay With Their Parents?

Falcons tend to stay with their parents until they’re confident hunters. After the initial 6 weeks where they’ve learned how to fly, they typically hang around for an additional 4-6 weeks.

Falcon babies are called fledglings when they first start to fly. Fledgling falcons will stay with their parents for about 6 weeks while they practice their flying which happens between the ages of 6 and 8 weeks.

What Do Baby Falcons Eat?

Baby falcons eat small pieces of meat. They eat the same animals as adult falcons. However, baby birds tend to be fed more frequently than adults due to baby birds’ smaller stomach sizes and fast growth.

Compared to adult falcons, eyasses eat a lot, again due to their fast growth.

How Many Eggs Do Falcons Lay?

Falcons are known to lay 2-5 eggs in their nests. The female incubates most of the time, leaving the task to the male when she has to feed. This process takes about 28 to 32 days.

When baby falcons hatch they weigh about 1-3 ounces and are covered in feathers but do not fly for another 35-42 days.

A baby falcon is called an eyas. They’re small, weighing only a couple of ounces, and are about 1-3 inches tall. They’re covered in down feathers and are fed regurgitated food for the first period of their life.

After 4-6 weeks they start learning how to fly, and after 6-8 weeks within hatching, they start hunting themselves.