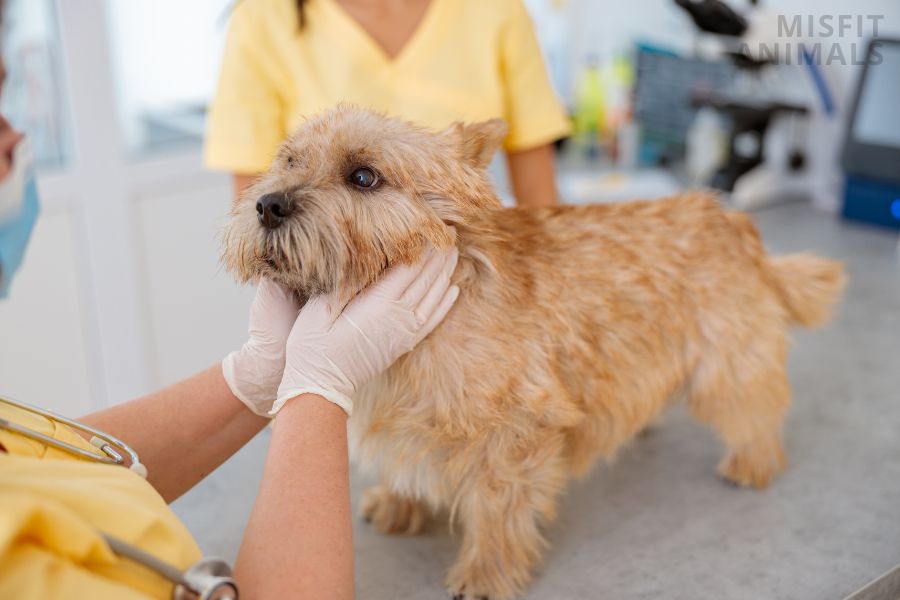 Black blood-filled bumps on dogs’ skin are not normal. They appear for several reasons, the most common being trauma. When the skin is traumatized, a hematoma develops. Other causes of black blood-filled bumps are benign and malignant tumors. Contact the vet if your dog has a bump filled with blood on its skin.

Even if dogs cannot tell us what hurts, there are some signs to look for. A bump filled with blood is one of them.

Dogs, like humans, have all kinds of spots and bumps on their bodies, which can simply be pigment spots, moles, or skin tags. These are not harmful.

In other cases, bumps multiply, ulcerate, or bleed. When this happens, it’s important to take note of the characteristics.

In this article, you will learn why dogs have black blood-filled bumps on their bodies, what you need to do, and more.

Why Does My Dog Have a Black Blood-Filled Bump on Its Skin?

Black blood-filled bumps on dogs’ bodies are either hematomas or tumors. Hematomas generally appear as a result of trauma or accidents. They resolve on their own in a few days and are usually harmful. Black blood-filled tumors can be benign or malignant.

Black blood-filled bumps on dogs’ skin are common. All dogs develop one at least once in their life.

They appear for one of two reasons:

These blood-filled bumps are usually round and smooth and vary in size. In the case of tumors, they can rupture, ulcerate, or become infected, causing pain and discomfort.

Skin traumas or accidents can lead to hematomas (common blood-filled bumps). When dogs get injured, the blood vessels in the skin can rupture, causing minor internal bleeding (in the skin).

That’s how a hematoma occurs.

A hematoma is a sac full of blood. When the blood vessels rupture, blood flows into the tissue and accumulates, forming a cavity. Hematomas are also called blood blisters.

As the blood is reabsorbed by the body, the cavity closes.

Types of Hematomas in Dogs

Hematomas are usually named according to their location. Auricular and scrotal hematomas are the most common, but they can also appear in other areas of the body.

Ear hematomas (or othematomas) form when a blood vessel in the ear ruptures, bleeding into the space between the ear cartilage and the skin.

It is most commonly associated with various ear traumas:

When dogs get ear infections (otitis), ear mites, ticks, or a foreign object in the ear canal, they often shake their head violently. This is likely to cause a hematoma.

Dogs with clotting or bleeding disorders can also develop hematomas without a history of ear trauma.

Certain breeds that do not have long ears are also affected by othematoma:[1]

Hematomas must be treated as soon as possible to avoid permanent disfigurement. In some cases, the othematoma is reabsorbed in time by the body. This depends on its size.

The recommended method of treatment is the surgical correction of the hematoma. In addition to treating the hematoma, it is important to treat the underlying cause, which in many cases is an infection or allergy.

Scrotal hematomas occur after trauma associated with the following:

They especially occur in large breeds (over 50 lbs.) with a lot of scrotal tissue.

Contact the vet if your dog develops a scrotal hematoma, as it may need surgery.

Hematomas on the Body

Dogs with hematomas often scratch them, complicating the situation. This can cause hematomas to rupture, causing further bleeding and pain.

Small hematomas disappear on their own, while large ones must be drained or surgically removed.

Bumps full of blood can also be tumors that appear around blood vessels (vascular tumors). They can be benign (hemangioma) or malignant (hemangiosarcoma).

Hemangiomas are benign tumors of the blood vessels. In some cases, they become malignant. When this happens, they are called hemangiosarcomas. They can appear anywhere on or under the skin.[2]

The cause of cutaneous hemangiomas in dogs is unknown, but researchers believe UV rays are a factor.

In most cases of cutaneous hemangiomas in dogs, there are no other symptoms apart from bumps: raised, black-purple bumps filled with blood on the skin.

The treatment of cutaneous hemangiomas in dogs consists of the surgical removal of the tumor mass. For this reason, it is recommended to take your dog to the vet as soon as you discover a black blood-filled bump on its skin.

Once excised, cutaneous hemangiomas do not tend to recur.

This type of cancer can develop both on the skin (cutaneous) and under the skin (subcutaneous).

Skin tumors are usually raised bumps that can be red, purple and/or black and are usually caused by too much sun exposure.[3] They appear in areas without hair or with white hair.

Subcutaneous tumors are malignant and can spread quickly in the body to other organs. Subcutaneous hemangiosarcoma is not always visible until it ruptures and bleeds. If this happens, deep, widespread bruises appear on the skin of the affected dogs.

In addition to the purple-black skin bump, the following symptoms can also appear:

Treatment mainly consists of the removal of the tumor mass and the administration of cytostatics or radiotherapy.

Why Does My Dog Have a Bleeding Bump on Its Skin?

Black blood-filled bumps can rupture and bleed. This especially happens in the case of hematomas.

Hemangiomas and hemangiosarcomas that appear in the axillary and groin areas present a greater risk of ulceration and bleeding because there is more friction.

If your dog has a bleeding bump on its skin, take it to the vet.

When to Worry About Lumps on Dogs

Lumps on dogs that are irregular, immovable, ulcerated, and bleeding, of any color, should cause some concern. They can be cancerous (malignant) and can endanger the animal’s life because they have the power to metastasize in the body and affect other organs.

Not all bumps on your dog’s body are cancer, and not all lumps with cancerous features are cancer. It is recommended not to panic and take your dog to the vet for an evaluation.

Lumps that could cause concern have the following features: